This article was originally published in the September 2017 edition of ITMI Monthly.

I want to be one of these boys.  I don’t know their names, but I know their actions.

They are probably like most any boy who lives in Zimbabwe today.  Loves to play football (soccer), gets into mischief, wishes for a chance to go to school, and goes to bed hungry way more than they want and way more than we experience here in the States.

I still want to be one of them. 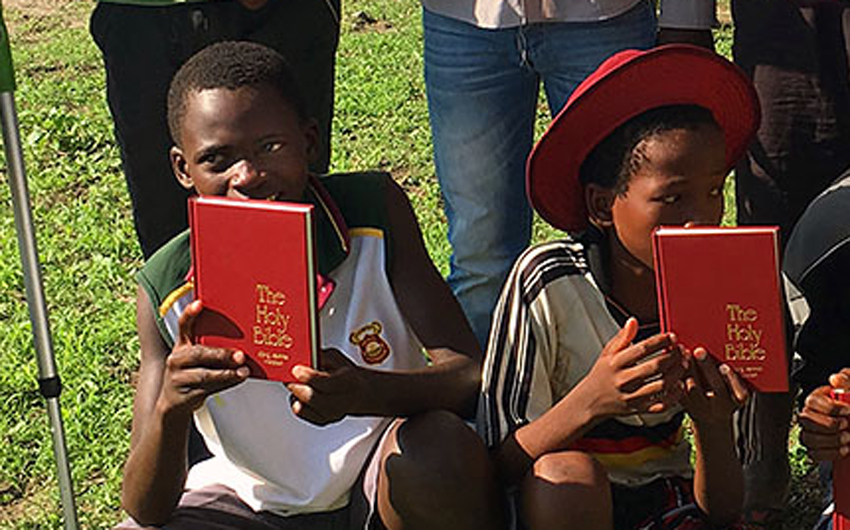 Two of the boys that saved Mpumelelo from the croc attack.

These are two of the boys that in a moment of life and death, even at their young age, three years ago held onto their young Zimbabwean friend, Mpumelelo (Mmm-Pu-me-lee-lo), as a crocodile had clamped on his left leg and was hoping to drag him back into the river and make a meal of him.

These boys probably didn’t say these words, “...not on my watch!”, but they did make sure, after a long, intense battle of tug-of-war, that on their watch, their friend Mpumelelo's day was not this day.

Mpumelelo now uses crutches because the medical system in Zimbabwe is completely unprepared to handle orthopedic injuries of this nature.

Most crocodile injuries don’t end as well as Mpumelelo’s did.  Thank you, Lord, that these boys were there and didn’t allow the uncomfortable situation to distract them from what really needed to be done.

William Langford shares with us the following,

"But all the wickedness in the world that man may do or think is no more to the mercy of God than a live coal dropped in the sea." — William Langford

God has done so much for each of us we are compelled to live outside our own wants and desires.  ITMI is blessed to be part of the Body of Christ that is used, with your help, to show and give mercy and help to our family of believers and future family in Africa and India and Eastern Europe.

Please pray for me as I partner with Pastor Phil McKeown of North Village Baptist Church (NVBC) in Phoenix in early October as we go to southern India to help ITMI’s Paul in India teach rural pastors what the Bible says it means to be a pastor.

We hope to empower them with insight and truth that many have not heard or understood due to their challenges of Christian education and proper leadership development.

We hope to bring to these needy pastors, with the sacrificial help of NVBC’s Crossing Missions program, much-needed teaching, training, workshops, and material they can keep, study and use as they seek to follow God’s mission for them and their villages.

An Indian pastor takes notes at a previous pastor's conference.

Pray for Paul as he prayerfully invites and assembles just those pastors and their wives that God is preparing to go to the next level of servant hood.

"At the workshop, she gained an understanding of the Biblical principle of stewardship and began to change her habits and everyday decisions." intouchmission.org/2018/08/south-sudanese-widows-life-changed-by-biblical-training/?utm_campaign=... ... See MoreSee Less