Szymon (name changed for privacy) stared at his doctor. What he’d just heard was something he simply couldn’t accept.

But as the months went by, Szymon had to accept that his youth - a time when he should have been carefree, enjoying strength and peaking as an athlete - had been invaded by cancer.

Szymon had sacrificed deeply to train as a gymnast. His coaches believed if he continued to train, he’d have a chance to compete at a national level and be a contender.  Szymon had worked incredibly hard to realize his potential.

Every decision he made was determined by achieving his goal - how he ate, when he slept, and how he used his time. He’d passed on social outings, his favorite foods and other relationships.

But now, as his cancer treatments began, all that was slipping away, and Szymon was angry.

How could the God he’d grown up reciting catechism about allow this?!

Szymon had gone to mass and said his confessions faithfully, but instead of being rewarded, God had responded by taking away the one thing that was most important to the 15 year old.

No one could explain to the young man why God would allow such a thing into his life.

When Szymon’s cancer treatments concluded, he threw himself into his training with new vigor. To those watching, it seemed as if he was driven by a defiance of God and cancer - or anything that would stand in his way.

Szymon went on to compete at a national level in bodybuilding and received 3rd place in his division. His training was interrupted two more times by cancer.

Each time, the cauldron of rage at God that boiled beneath the surface of his life was fueled.  Like lava cooling down, the rage was cementing itself into the core of who he was. He carried it everywhere and it impacted his thoughts daily.

A few years later, Szymon was teaching an exercise class when an American began attending one of his classes regularly. The American was quite a bit older than Szymon, who was 21 at the time.

The older man’s hair was greyish white, but he still exuded energy and life. His pale blue eyes would sparkle when he spoke about his grandchildren.

He was not married, but had been like a father to a young man he met through volunteer work at a state-run children’s home, and was now enjoying his role as a grandfather to the now-grown young man’s two children.

Szymon, like many in Poland, was naturally curious about the American, and interested in the opportunity to speak English with someone whose first language was English. Why would an American live in Poland?

At first, Szymon thought it was strange how the foreigner seemed to gently pursue a relationship with him - unlike most of the other class members, who came, exercised and left. As he got to know the unusual class member, he discovered something that drew him to the man, whose name was Jim.

Jim was forthcoming about his own relationship with God. And the things he said about his own experiences were unlike anything Szymon had heard before. Jim seemed to speak with the Son of God, Jesus, honestly and constantly. Like a trusted friend.

He claimed he had conversations with the spirit of the ancient Jew from Galilee, who Jim firmly believed had risen from the dead and was present with those who follow Him.

For Szymon, this was a completely new way of relating to God. He was used to the idea of confession, but in his experience, it was the priest who spoke back, not God Himself.

Szymon, like many Poles, understood his fallen state, and never dreamed God the Father would want to converse with someone who had fallen as far short of carrying out the sacraments as he had.

Szymon and Jim spoke many times about God during the 2 or 3 times a week their paths crossed. Jim shared several times how God had created everything good, right and perfect, but that sin had entered the world, separating the Creator from His beloved sons and daughters.

God wanted His people back, but he couldn’t be in the presence of their sin, so He sent His Son, Jesus, to take the punishment for the sins that justice demanded.

He shared how the Bible clearly states that Jesus rose from being dead after three days and that those who confess their sins and believe in Him could be saved from the dreadful punishment they deserve.

Each time, Szymon longed for what Jim was offering, but he couldn’t let go of his bitterness toward the God who had allowed him, an accomplished athlete, to suffer three bouts of cancer before the age of 23. 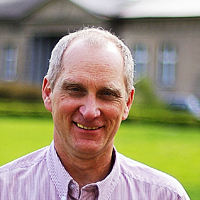 Szymon is now 23. He is no longer training for bodybuilding competitions.

ITMI’s Jim LaRose doesn’t see Szymon at exercise class anymore, but he and Szymon are still friends. In fact, he considers Jim his “grandpa.”

In August, Szymon sought Jim’s advice on several life decisions a 23 year old makes, and introduced Jim to his girlfriend, who was also curious and open to hearing about Jim’s relationship with God, but, like Szymon, not ready to make that decision.

“I am 100% convinced Szymon is in my life because God is going to use me to bring Him to the Lord,” says Jim, “I’ve demonstrated a salvation prayer, shared the Gospel several times, he’s just not ready yet.”

The pair has even agreed that it is no accident their paths crossed. There is a purpose, and Szymon accepts that readily.

Szymon is just one of several young adults whose paths have crossed Jim’s in various places of Polish life and now get together with Jim regularly. These younger friends seem to seek the mentoring type of relationship Jim is so gifted at.

Several of these young adults met Jim when they were teens or pre-teens, through Jim’s volunteer work at a state-run children’s home.

A few were people Jim came in contact with through regular-life activities and felt the Spirit prompting him to reach out and see if the relationship would blossom. Others met Jim when their parents allowed them to attend a summer camp put on by Jim’s church, the K5N church pastored by ITMI’s Piotr Zaremba.

Jim’s involvement with the camp as an English teacher meant that many Polish parents who would otherwise not allow their children contact with those outside the state church, sought this experience for their children, even though it came from a group they would normally avoid contact with.

Polish camp leaders have had parents seek them out to say “thank you” and share that they see a difference in their child because of the time they spend at these camps. The result is that over the years, many Poles who did not yet have a relationship with Jesus came into relationships with Jim or other Polish believers through the camps.

“Over my years in Poland,” Jim says, “I’ve learned to recognize a ‘click’ in my spirit when I believe the Lord is letting me know of a potential ‘ministry-related’ connection.”

The relationships built and lives impacted spiritually and materially is possible through the sacrificial support of Jim’s American partners - people who care about the hurting enough to help Jim get to Poland, where he has and continues to be a beacon of hope pointing to Jesus for many.