The poor, socially rejected and homeless feel utterly helpless and without hope in the world.

They face immense hardship living on the streets and eating from garbage dumps and cans. Winter weather is harsh, unforgiving for those facing exposure.

Eating from the dumps means competing with the dogs for edible finds.

Many want to change their lives but do not have anywhere to start, or community to support them in such an endeavor.

Homelessness, poverty and addiction lead to social ostracism and become a vicious cycle that requires intense intervention for those who want to change.

The New Life Center sits at a physical crossroads. But it has been a fork in the road for over 800 men since its opening.

Bread of Life's New Life Center (NLC) is a transitional home for men who truly want to change but can't do it alone.

Men commit themselves to the home for 4 phases, at the end of which they become fully reintegrated into society. During this time they participate in classes where they learn skilled work, attend chapel services and counseling sessions, and live a disciplined schedule to help them become productive citizens, and serve others.

With a full staff of professionals, including counselors and trainers, NLC offers its residents the necessary medical help as well as Christian counseling. Residents are guided through reconciliation with their families.

The NLC men serve the community of Dluga Goslina, where the center is located by helping with local restoration projects.

Although many initially fought the presence of NLC in Dluga Goslina, residents have slowly lowered the wall of resistance through the center's caring interaction in the neighborhood.

Now, the New Life Center men are well-known in the community for being hard workers and are often sought after for projects!

During their stay, they'll build relationships with followers of Jesus on the NLC staff. They'll see and hear the gospel over and over in many different ways while they are there.

This combination provides a powerful opportunity for “New Life” spiritually, relationally and financially. 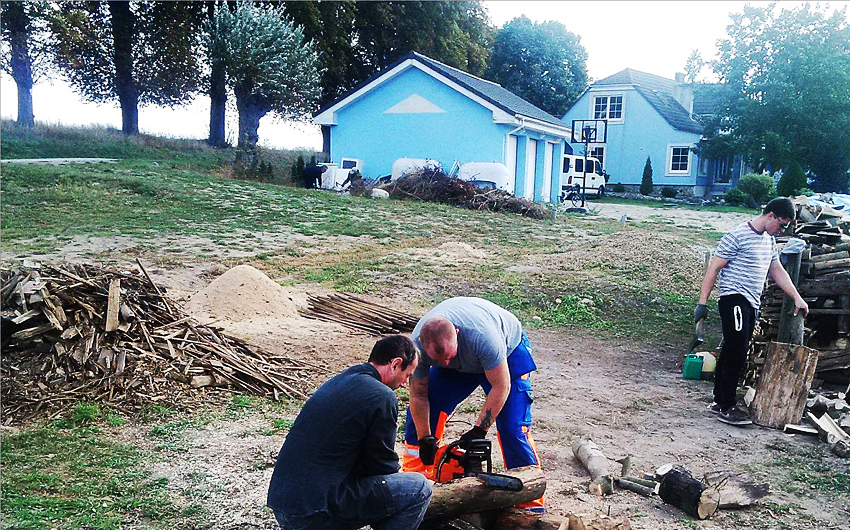 A huge factor in the success of the New Life Center is the work and service the men do. They enjoy being seen as productive, contributing citizens.

Another key factor in the New Life Center's success is its Biblical foundation.

The faces of some of the men whose lives were changed via the New Life Center.

This 4 minute video gives you a feel for the incredible impact and changing lives at the New Life Center.

How ITMI Supporters are Changing Lives in Poland

One young polish pastor saw this deep need. The Lord called him to “translate the Bible for revival.” But as a young pastor in a post-communist economy, he simply didn’t have the resources to do what needed to be done. There were no organizations of Bible scholars who could tackle this task. Anyone with the qualifications was buried by trying to make ends meet as teachers or pastors.  And that might have been the end of the story if not for…

Story After Story of the Waves Your Support is Making, featuring Richard and Brooke Nungesser (Podcast Episode)

Enjoy the enthusiasm of Richard and Brooke Nungesser as they share an endless stream of stories of the amazing things God is doing through Bread of Life.

Rebuilding After a Train Wreck – When There’s No Spare Parts

Two trains. One track. Thousands of pounds hurling down the track at high velocity. The end result can only be a disaster.

How I Gained a Desperately Needed New Perspective

“My name is Mateusz. I am 29 years old and I come from Malbork, Poland. Various addictions controlled me in every aspect of my life: from alcohol, to drugs, to gambling. My dependence on them determined the direction of my life. As a result…”

What I Came Home to One Pivotal Friday Night

One Friday evening, I came home, opened the door and I saw – nothing. The apartment was empty. My wife, kids and all their belongings were gone. All that was left behind was my clothes.

For 16 years I was on the street. I lost touch with my family…

I have been an alcoholic for around 20 years of my life. In my life, I have had two very long spells of non stop alcohol abuse: once for about three years, the second after I lost my mother – which went on for over four years. I was drunk day and night. In December of 2015, I…

A New Outreach Launched in Poland!

ITMI’s Richard and Brooke Nungesser celebrated the 15th anniversary of their move to Poland to teach English this year.(The same year ITMI celebrated 35 years of keeping you “in touch” with quality national believers who are faithfully doing good work!)  The outreach to the homeless Richard and Brooke founded with a few cups of tea 15 […]

Four Phases of Restoration that are Turning Heads in Poland (Phase 2 is Uncommon and Awesome!)

Revealed! How the New Life Center succeeds in guiding men through the restoration process, step by step. The Four Phase process that is turning heads in Poland.

How God Opened a Door that Was Once Firmly Shut

My recent trip to Poland allowed me to see and participate in many heartwarming connections with our Polish brothers and sisters. Included below are a few of the images that I get to experience on my trip to Poland, hoping you get a better idea of what God is doing in this gospel-needy country.

Where the Road Less Travelled Led

Marcin (pronounced march-in) and his best friend were, in Marcin’s own words “not good guys.” But their lives were about to be turned inside out.

When ITMI’s Richard and Brooke Nungesser first arrived in Poland in 2001, their “primary work” was teaching English. God had other plans for the pair.

How He Overcame a Troubled Past and Achieved Greatness

Please remember this man, his face, and his story—for he is no longer here to share it on earth, but his life is worth remembering! His name is Piotr and he will be remembered as…

Arthur lived on Poland’s streets for 16 years. He bounced in and out of 12 different shelters. Life was such torment for Arthur that he attempted to take his own life – not just once – but 48 times.

How Much Did We Raise for Sick Children and Their Families?

Bread of Life Kalisz’s Christmas at the Square event was a big success!

He Comes to Make His Blessings Flow

I would ask my mother, “Why are you drinking?” Her answer, “I drink so that I can forget what I have gone through all the years was a slave.”

Exceptionally Equipped for Discipleship in Poland

Daniel and Mike met Nicholas, who was homeless at the time, at a train station in Poland. While they were talking, sharing the gospel and praying with him, another homeless man tried to start a conflict with Daniel and David. Nicholas stood in front of them…

Not long ago, Slawek’s alcohol-induced tantrums estranged him from his family. He was unable to hold a steady job in the shifting construction market. His entire life’s work, everything he’s been working so hard to build, turned into a million tiny, almost un-reconstructable pieces.

Crying Out to God from a Drug-Infested Dump

Most of us think we can handle our life alone, thank you very much. We don’t need nothing from nobody. I was like that, too. I thought I had it all figured out.