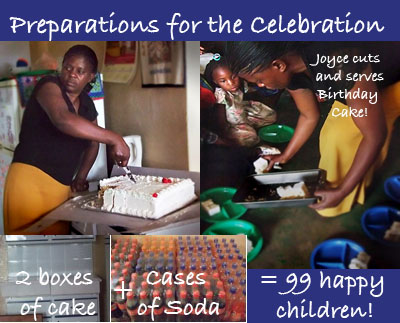 Carol McBride (an American missionary to the street children) has been beaten and thrown into prison because of taking care of the children. She has challenged the social welfare and the CPU (Community Police Unit) over the abuse of Street Children’s Rights. Now she is being falsely accused of sexual abuse of the boys she has provided a home for. Similar allegations were brought against another local Pastor, James Gondwe. The President of Zambia, Rupiah Banda, is currently sorting through these issues brought against Gondwe.

Birthday and Christmas Celebration
The Samaritan Children gathered together and had fellowship with one another around the meals. There is no better time to tell stories than when one knows that there is food before him or her. Even after the Christmas Celebration, some Samaritan Children refused to go back because there was still some food left. (rice, soft drinks, chicken, cakes, fruit, corn flakes, biscuits, potatoes, meat and sweets) They wanted to finish all the food that was provided for them by John and Joyce with the help of ITMI.

The Plight of Street Children in Zambia

Street BoysIt is very rough for the street children now more than ever before because the CPU is using force to take the children out of the street to prison. On Christmas night, over 56 street children were bungled into a state truck to an unknown destiny. Pictured to the left are some of the survivors, who still must protect themselves from brutality. We bought some of them a meal at a restaurant in Lusaka. Chilishe Mulemga (yellow shirt, top left) thanked God and us for clean food. He told us that they usually eat from trash cans.

On New Year’s Eve, our adopted son, Peter Jere, suffered from acute Malaria. We prayed for him and later we took him to the private clinic where he was treated. Peter is still on Malaria treatment. This is a strange attack. Please, will you pray for our son, Peter?

Sarah Phiri had to undergo surgery on her foot not long ago, but, praise God, it is now completely healed. However, now she is in immediate need of surgery due to a growth in her left eye before the eye is completely destroyed. Will you please pray that God may provide funds for her operation?

Thank you very much for your prayers and support!

"Kent and the team then loaded up into a four-wheel-drive vehicle and transported the vehicle on a barge across the massive Zambezi River so that the former architect and project manager could see first-hand the water well drilling in the extremely remote and equally needy villages." ... ... See MoreSee Less

Kent and the team then loaded up into a four-wheel-drive vehicle and transported the vehicle on a barge across the massive Zambezi River so that the former architect and project manager could see firs...
View on Facebook
· Share