Not long ago the Le Roux family took a big leap of faith and turned their lives upside down and move their family eight children and leave the comforts of Moreson Farm for the forsaken, undeveloped and poverty stricken area of Onseepkans in Northern Cape, South Africa. Far away from grocery stores or other services, they have truly forsaken all to follow God’s call.

It now has been three weeks since we as a family moved to Onseepkans in the Northern Cape of South Africa to start a new mission. We must admit that it was not an easy three weeks, with challenges from all sides, but by God’s grace we continue to go forward in His strength. The Lord has been good to us. So far the weather has been unusually cool for this time of the year. Normally at this time it can be quite hot in Onseepkans already, with people sleeping outside during the evenings. Until now the highest temperatures had been in the low 40’s Celsius, with the evenings not too hot. 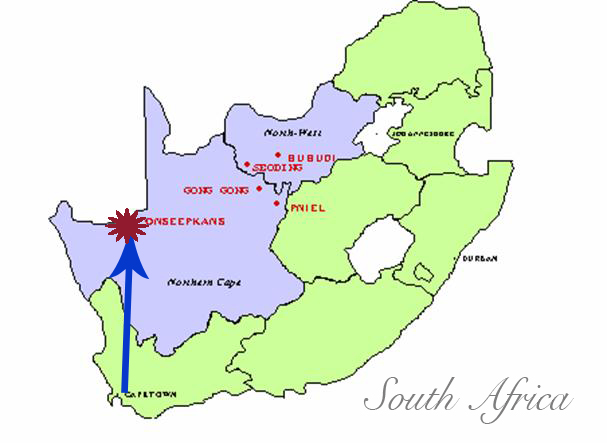 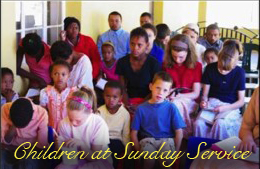 Our first three weeks comprised mostly of doing general maintenance, planting fruit trees, starting a vegetable garden and conducting services four times a week. We were surprised by the amount of young children in Onseepkans, wandering around idly in the afternoons and over weekends. Some of them attend our services from time to time.

Although everyone has a general sense of respect towards the Lord and the things of the Lord, there is big need in educating the people on the basic principles of a Christian life. Alcohol abuse is the norm of the day. Teenage pregnancies and children out of wedlock are nothing to frown on. The majority of the young women have one or more illegitimate children. The general term amongst the people for this is “voorkinders”. Translated, it means children that one gave birth to before marriage.

In the past week we had a team from ‘Concerned Young People’ visiting us and putting up posters in the Northern Cape warning the people about the new move of the government to ‘legalize drugs’ by wanting to distribute drugs on a controlled basis to the drug addicts. Some of these posters that were put up in Onseepkans caught the attention of the local police and they paid us a visit. Eventually after our discussion they were excited about using us to help them with programmes in the community to warn and educate the people.

Please continue to pray for us that the Lord will direct our path as we go forward in His strength.

Andzia had never seen anything like what she was experiencing. She stood in the balcony of the large concert hall, tears spilling down her cheeks. ed.gr/ck12e ... See MoreSee Less

“I Was Completely Lost, and at the Same Time, So Excited!”

Andzia had never seen anything like what she was experiencing. She stood in the balcony of the large concert hall, tears spilling down her cheeks.
View on Facebook
· Share