As we’ve shared before, in the last couple of years, a UNICEF policy forced most of the Samaritan Children who were then living and thriving at Samaritan Children’s Home to be returned to their relatives – most of the time to distant, distant relatives that had very little connection to the children. In the case of one of the Jere’s beloved daughters, this meant being ripped from a loving home and the only living adults who had ever cared for her and being shoved back into an extremely abusive situation.

The following is an excerpt from an article written in 2007 about Catherine’s story before she was taken to live with the Jeres:

Catherine Mumba was five when she was sent to live with her aunt. Her mother had died minutes after Catherine was born in Zambia, Africa, and her father died later that day of cholera. Catherine had lived happily with her grandmother for five years when her grandmother passed away, leaving Catherine with no one to care for her but her aunt. Her aunt, already the mother of three, agreed to take Catherine in, but made it clear that she was nothing more than an unwanted burden. Already in sorrow over the loss of her family members, things went from bad to worse for little Catherine. Her aunt began to viciously abuse her, verbally and physically, denying her food and blankets.

For three long years the mistreatment dragged on. Many times, Catherine remembers praying for relief, but none came. One day in June of 2006, her aunt locked the door, tied her hands and her legs and whipped her from morning to night. At nine o’clock that night, a neighbor heard Catherine’s cries and called the police. The police arrested her aunt but released her the next day, after advising her to take Catherine to someone that could care for her. They recommended she take Catherine to the reputable John and Joyce Jere of Samaritan Children’s Home.

After living happily or a few years at Samaritan Children’s Home with two parents who love and care for her, Catherine was forced out of the Jere’s loving, safe home by the UNICEF policy. Catherine, now 13 and in grade 6 says,

“I have suffered under the helm of my guardians because they oppressed, used and abused me by giving me a lot of work before and after I come back from school. I washed clothes for eleven people, using my hands. Most of the times, my hands were painful because of washing clothes for a very big family. I cooked all the food for the big family and washed all the plates while all their children were seated or watching television. I swept inside and outside the house and I went to bed very late. My aunt verbally and physically abused me. I got fed up and I decided to come back to my parent (John and Joyce Jere) who love and accept me as their own daughter. Even though Dad and Mum (John & Joyce) brought food, relish on monthly basis to my aunt, paid for my school fees, I was still being abused and very difficult for me to concentrate in class as I was very tired. Some times, I slept in class and the teacher noticed. At one time, she called me and asked me as to why I was sleeping in class. I told her what I was going through.”

While not all the children suffer such extreme abuse in their new living situations, Catherine isn’t alone.

Fifteen year old Elydia Kazadi broke into tears during a visit with the Jeres, narrating her challenges,

“The owner of the house wakes me up at 05.00 hours, to clean the house, wash plates and pots while her older children sleep. One day, I was sick and tried to stay in bed, she insulted and threatened me that I would be forced to stay in the streets. I have been verbally abused and physically beaten when we eat the meals. I am like a maid, doing the rest of the work at the house. Dad & Mum (John & Joyce), you brought monthly food for me and paid for my school fees but that is not enough be-cause I am suffering. I want to learn but I can not concentrate in class due to excessive abuse. Please, please, let me stay with you and let me be a Jere. My father and mother died and now you are my father and you are my mother. You love us and treat us well as your own children.”

Cinderella was saved by her prince, but will there be a happy ending for Catherine and Elydia?

The good news is that ultimately, yes, there can be a happy ending. They both have the opportunity to be daughters of the King, and there is a Savior has already conquered evil, enduring the abuse of the cross, giving their suffering a purpose and an end, and ultimately securing them a happy ending on His return. But because that same Savior has secured our own happy endings, believers are called and moved by the Spirit to demonstrate the coming kingdom of Jesus, where abuse will be banished and triumphed over once and for all. We are calling believers to action. To demonstrate the coming Kingdom by fighting injustices such as these. 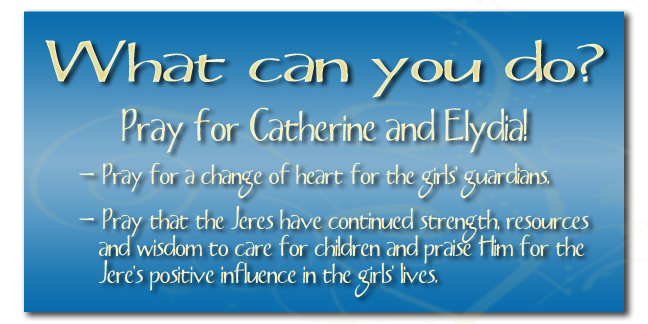 Our partners, Vicky Waraka, Lazarus Yezinai and a team of believers from Juba, South Sudan hold an evangelistic crusade for refugees in the nearby Kiryandongo Refugee settlement. They also provided a 3-day workshop for local pastors many of whom have precious few resources and very little, if any training. Many were saved, prayed with, encouraged and equipped for Biblical leadership! ... See MoreSee Less