Gerhard le Roux stood at his front fence with his shot gun firing on a group of baboons on a mission to pick off some of Gerhard’s beloved little goats. 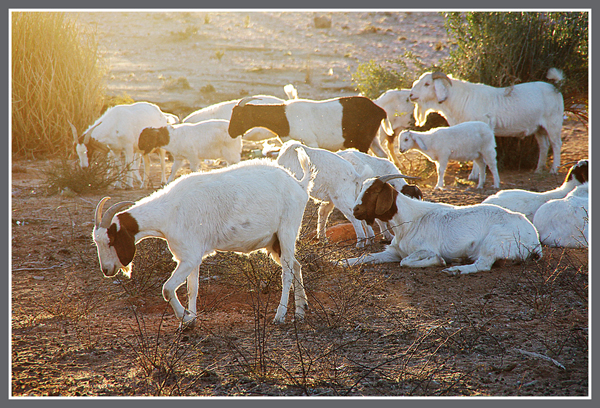 He was unsuccessful the first two rounds, but round three went to…

Here’s what he has to say about his mission thus far.

A Week at Onseepkans Mission 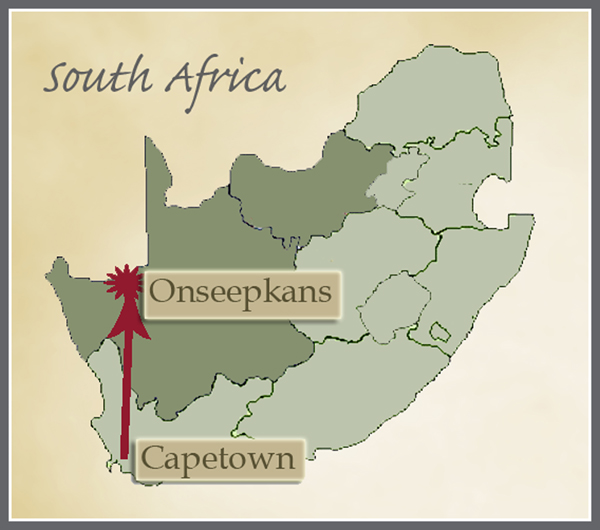 Gerhard and Elmane send their greetings and deep appreciation. The whole le Roux family really didn’t want to see us go. I’m so glad that we stayed almost a week this time.

They have done a lot to their “new” place in really just less than a month since moving in. It’s located on the main dirt road that connects the two largest settlements of Onseepkans.

It’s very “frontier” by our standards, but really, quite livable. They have a big garden starting to come up, which is an example, testimony, and witness to all who traverse the road. 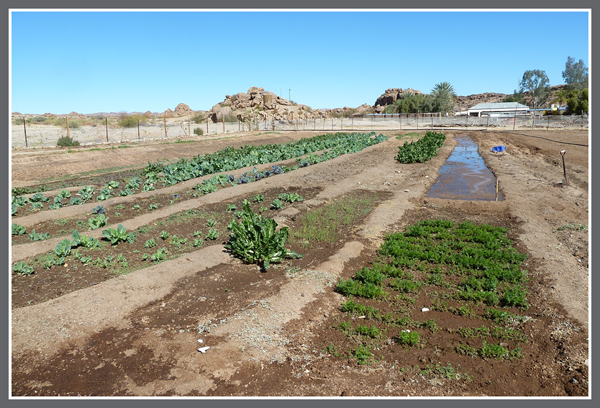 The le Rouxs’ garden, like the gospel, is an oasis of green in a barren land.

ITMI partner, Richard Nungesser is traveling with me. Our sleeping accommodations were in a neighbour’s get-a-way house. It didn’t have electricity. After walking the 250 meters from Gerhard’ s house in the cold, pitch-black, African night, we were welcomed by old time oil lanterns. Don’t even get me started on what its like to take baths in 50 degree temperatures!

The sunsets made all the other stuff totally worth it, though.

Goats are Important to the People of Onseepkans

Goats tend to be the only retirement account the people of Onseepkans have. Its also an obvious food source.

Gerhard ’s goat heard shows what can be done with discipline, care and God’ s help. He helps many others care for their herds. His ministry is full of this type of “earning the right to share the gospel” to this spiritually vacuumed area.

Gerhard has helped many of the people of Onseepkans care for their herds. 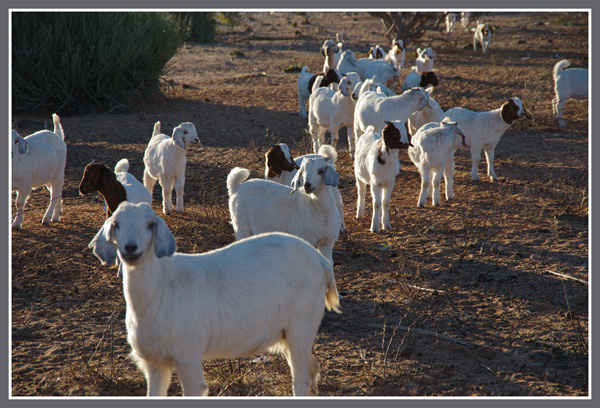 We had lots and lots of opportunities to help the le Rouxs grow their impact on this forgotten community.

They envision an elderly home, youth center for locals and youth camps, self-sustaining income opportunities, feeding and hospitality ministry, and a lot more.

We brought 4 used laptops with us for Onseepkans Mission. They will be used to start a computer training school to again, better connect with the spirituality numb of this area, and show God is alive and still loves these people.

The le Roux family will demonstrate to the people of Onseepkans that God loves them any way they can!

Another Flock: the Church of Onseepkans

Sunday I preached at the small United Reformed Church of Africa in Onseepkans. It is known as a “brown” church. Brown because the blacks and the whites don’t typically attend this denomination.

No men came. But there was a handful of little bush lady descendents of various ages. The younger ones with bundled up babies close to their chests, all of us in a tiny cold, window shattered concrete building.

After the service we handed out candy and a knit Afgan blanket. Sunday afternoon we preached at a local commercial farm’s migrant worker’s “town.” As a community, they tend to be transient and typically very immoral.

Our translator had obviously been drinking from the smell on his breath, but he was the one that invited us and organized the meeting. I later had the privilege to sit with him as he cried over what his life has become.

He repented, confessed his sins, and rededicated his life to be a “Christ follower.” I’m so glad he has the opportunity to be discipled by Gerhard!

As I write, we are currently driving south from Onseepkans toward Moreson Farm in Malmsbury. We have departed the barren bush land that surrounds Onseepkans.

There are 6 of us in the bakkie heading south to Cape Town, where Rich and I will stay with ITMI partner, Charl van Wyk, who will have us at the airport at about 4 am tomorrow, Tuesday to fly to Zambia. Then we head to Lukulu West.

This is one of the villages the ITMI team visited on their last trip to Lukulu West.

First we plan meet up with ITMI partner, Tim Keller. Tim has been sick this last week and may not even be able to go with us to Lukulu…which means I may have to drive!

Gerhard gave us some vegetables seeds to take to Lukulu, so we can teach them to farm. This was Elmane’s idea. We are jazzed about the possibilities of getting new vegetables, or actually any vegetables for these people. Once “Farmer Gerhard” thought about teaching a village in Zambia to grow vegetables, he really almost came with us! He wanted to go sooooo bad. Maybe next year!

The sun has just about set as we descend into the Cape Town Valley. South Africa is almost behind us for this trip, and Zambia is ahead of us.

The le Roux family compound isolated from society, but not from God’s love, peace, joy and happiness. This remote and difficult location would run most missionaries away after one summer of 130 degrees with no air conditioning.

Yet, these same conditions make the le Roux family’s opportunity even greater. I can’t help but envision the future of this ministry; once the intensely superstitious people see a continuous display of who and what the real God is about, they will accept and spread the good news of the gospel willingly.

Thanks for sharing this trip and ministry with us, the le Rouxs, and our not-yet-but-soon-to-be family members from Onseepkans! Blessings to you…