Jim LaRose Banner
A few years ago I teamed with a woman from our Polish church who translated for me when I taught Sunday school. This woman, named Maja, also translated for me at the Child Evangelism Fellowship camp a couple summers ago. This was the camp where I first met little eight-year-old Maciek. As many of you already know, Maciek and I formed a bond that has continued to grow after the CEF camp ended. At first, I would go visit Maciek at his place in Warsaw, but more recently, Maciek has instead been coming to see me at my home in Poznan.

I’ve written about Maciek’s background in previous newsletters, so I won’t repeat everything again now. But as a quick reminder, Maciek has a very “displaced” personal history, which eventually landed him in the legal custody of his step-grandma. Sadly enough, Maciek has no blood relatives who want to take him in.

When Maciek comes to visit me in Poznan, he and his 12-year-old half-sister, Kamila, usually travel by train. Kamila stays with Maja’s family, while Maciek spends all of his time with me. 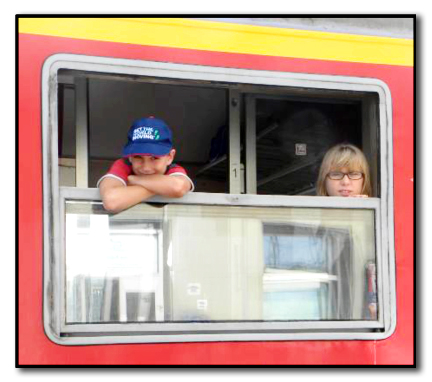 Because we’ve spent so much time together, Maciek and I have been able to establish our basic expectations regarding daily routines, appropriate behaviors, and relationship parameters. It’s all pretty basic stuff, but originally it was new to Maciek, and at first it presented quite a struggle between the two of us. We’ve worked through most of this, though, and I think it’s safe to say that the relationship Maciek and I now share has a definite “family” feel to it.

This family feel still requires adjustments on Maciek’s part, though, since the parameters in my home are quite a bit more “defined” than what he lives by with his step-grandma in Warsaw.

For example, when he is with me:

-he has a set bedtime
-his TV time is limited and monitored
-he is expected to eat the meals provided
-he must tell me where he goes and who he will be playing with
-he must return at the agreed upon time
-his sugar/salt intake is greatly limited
-he must eat at least two pieces of fruit every day
-he must brush his teeth and bathe daily
-he has absolutely NO time with video games or hand-held PSP games
-he must do everything that he is actually capable of doing himself: clear his own dishes at meals, pick up his toys, put his dirty clothes in his hamper, etc.
Also, every night before going to bed, Maciek reads to me (in Polish) from a bi-lingual Child Evangelism Fellowship Children’s Picture Bible.

Afterwards, we pray together, spend a bit of time talking about the day, and then he’s off to bed. (This actually has become one of Maciek’s favorite times of our day together.)

In spite of these different expectations and parameters, Maciek continues to come back of his own choosing, and this past summer, he again spent a couple weeks in Poznan with me. Suffice it to say that this last visit was the best one yet…totally enjoyable for both of us. One of the joys of working with disadvantaged Polish kids is the opportunity to introduce them to elements of American life that they would not otherwise get to experience. A number of these activities have become regular parts of the relationship that Maciek and I share together. Simple things like: making (and eating) sloppy joes, baseball, corn-on-the-cob and peanut butter and jam sandwiches.

Although I don’t want Maciek to be dependent upon me for his personal entertainment, I do try to spend as much time with him as I can……just normal things together like: 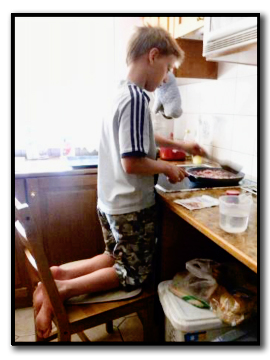 -doing the shopping
-playing catch
-working jigsaw puzzles
-building with Lego-like blocks
-going to church/Sunday school
-playing table games (Maciek especially likes Sorry, Uno-Attack, Super Farmer, and the card game War).
All-in-all, it does seem like we’ve fallen into a pattern of doing pretty much what most any family would do together…… which leads me to the next significant prayer request.

From information that Maja has obtained, it appears that Maciek and Kamila’s life in Warsaw is changing somewhat… nothing bad/dangerous, more a refocusing of step-grandma’s priorities.

Maja’s heartfelt opinion is that the two kids might be better served if they lived full-time in Poznan…..Kamila with Maja’s family and Maciek with me. Maja is looking at beginning this in the fall of 2013. Maja’s heart also desires that Kamila and Maciek attend King David School, Poznan’s only private Christian school.

For Maja and her husband, the transition would be fairly workable, given their current family set-up and financial standing.

For me, however, it would create major changes in virtually every aspect of my daily life and ministry focus. I’m pretty sure Maciek would readily agree to come live in Poznan with me. But having Maciek in my home full time would minimally require a seven year re-focus of time, energy, and resources… again, all major factors to consider.

No decision will be made until next spring, but I welcome your prayers even now ahead of time.