Steve was able to get this bit of news out from remote Lukulu, Zambia – a little foretaste of what is to come when he gets back to civilization and gets his stories out! Stay tuned! 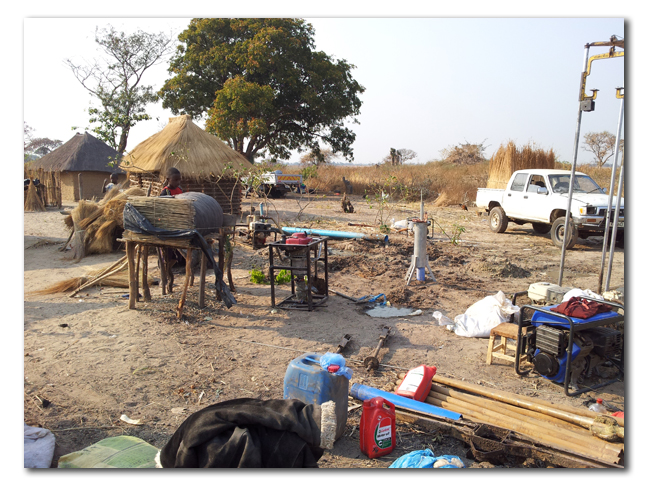 “This was our home for the drilling and finishing of the 2nd well. Never had a white man come and visit them. They were honored that a white man would come and be with them.

We ground cassava root (staple food mixed with a bit of maize meal) by hand…by pulverizing it with a centuries old method of beating up and down with a post in a big, tall and deep bowl. Totally woman’s work and they loved that we would do it. We danced with one of the leaders of the village and the people just laughed and laughed… they just don’t expect a white person to do such things.

I’m bringing home a hand made, bush created hand ax that I traded for with the brother of the man that leads this village. If it could talk… sure it could tell stories.

They loved the digital camera review screen…they just giggled and giggled at seeing a pic of themselves. Then when I printed a picture on a 4×6 with my portable printer…wow, you should have seen their faces. Everyone wanted one at that stage…and i was prepared to do that, but my printer only printed…one picture before it died!

Side story…after I gave that print to the guy in the print who was one of the men sitting around, I kinda freaked out because it would be pretty bad to give such a gift to a regular ole guy, and not one to the head of the village. What was I going to do? Well God just so happened to allow my one print to be…of the man who IS the head of the village! ;-)). Pretty cool huh? And he was the one that told John Jere later that day after we dedicated the first two wells with the “MP(Member of Parliament) translating for us, that he had given his life to Jesus! There were many that prayed the salvation prayer…out loud in front of everyone, yesterday at the dedication ceremony.

And you should have seen the mass of thread bare people as we did the used clothing distribution.

The little girls, ragged and filthy, had such smiles and glee when they were handed those dresses given to us by Joyce Moore…dresses made out of pillow cases.

This is a photo from a previous visit to Lukulu when dresses were handed out, just to give you an idea of what it might have looked like this year.

It almost caused me to loose my emotions to watch it all…the mass of people just wanting something to cover their bodies.

It really got me when we ran out of little girl clothes and there was one little, tiny girl about 3 who was heart broken that she wasn’t going to get anything. Can you hear her just walking around… sobbing? I mean just heart broken. The kind where she was hurting from the inside out. Well, there will always be ’someone’ who won’t get what they want, or maybe anything at all…
But yesterday was NOT that day for that little girl. I had to be a bit sneaky due to a major problem I could immediately create if anyone saw me take from my own clothes…but that is what I did. I found one of my snug dri-fit shirts, that happened to be pretty clean still, and hid it where Joyce Jere could go get it and give it to that little girl. That little girl didn’t get a pretty pillow case dress like the other girls, but she didn’t go home empty handed. At least her lower area was not draped with shredded rags that exposed her front and back.

On so many stories… just too little time and too challenging to type on my phone.

Thanks to all of of you for being on this trip with me, and helping me share God’s love for these forgotten people.

So now you’ve had a glimpse of what you are a part of because of your faithfulness to pray for Steve.