The Black Hole of Africa

One of the world’s truisms widely believed today, is that African society can be changed for the better by offering the continent money for education and training.

Secular non-governmental organizations, as well as governments, and international aid agencies, pour billions of their taxpayers’ and supporters’ dollars into this seemingly black hole of Africa, where loads of monetary input produces little in output that is measurable or lasting.

That’s what things look like from outside Africa – despite the governments clamoring for greater ‘investment’. Let me share with you what it looks like from inside Africa, what it’s really like, and what we truly need.

But first, some personal perspective: As a native African Christian missionary, I’ve dedicated my life to helping Africans. I can attest that our needs go far beyond what mere education and training can remedy. Consider these social challenges – shocking to our ears, yet practiced in various areas of Africa.

Traditional healers teach that if men—who are HIV positive—have sex with a virgin, they can be healed of their positive status. Not surprisingly, baby rapes are a challenge in our society.

Women are treated like second-class citizens; they are often uneducated and beaten or raped by their ‘men’ when in drunken stupors. They work the fields while their husbands drink at the shebeen (bar). 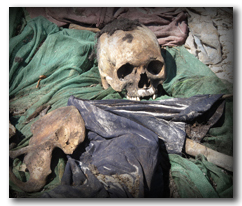 Human sacrifices still take place in some areas; police are too scared to investigate or prosecute for fear of being cursed by the practitioners of witchcraft.

Murders (including the unborn) are common for reasons of religion, witchcraft, tribal rivalries, tribal infighting, politics and crime.

Many Africans still believe the age-old concept that “the king (or chief) is the law,” rather than what Christian Reformers taught—that “the law is king.” This belief leads to all kinds of tolerated injustice in the courts and society.

Sexual promiscuity is rife. Ever wondered why Africa has lost control of the HIV Aids pandemic? Unfortunately women cannot reject the sexual advances of a man. In some cultures, men believe that a woman must prove to them that they are able to bare children before they will marry them.

The frail elderly are left to die through hunger or get eaten by wild animals when their nomadic families move on and they cannot manage to support themselves.

Cannibalism is still practiced in some areas, and so is slavery.

I could bore you with many more issues, but I think I’ve made my point. If you believe that there is nothing inherently wrong with the above-mentioned, then don’t read any further, this is not meant for you.

Looking at this from afar might just be an interesting source of debate, but living in such a society can be pretty draining—both spiritually and psychologically—as well as physically detrimental.

Now, despite all these challenges, the Lord is raising up new African men. These men are not spreading HIV Aids through sexual promiscuity, or raping babies. They are providing for their wives and families by working hard and not arriving at work with hangovers, nor stealing from their employers. Further, they do not murder or eat their neighbors.

These men are Christian men changed by the life-transforming Gospel of Jesus Christ. They are being discipled by men – missionaries and pastors, who take God’s Word seriously and practice it in every area of their lives.

None of the challenges raised earlier are changed by secular education. Teaching children that they come from nothing and are going nowhere just reinforces the “survival of the fittest” mentality they are already living out. Christian servanthood and charity are not local customs. 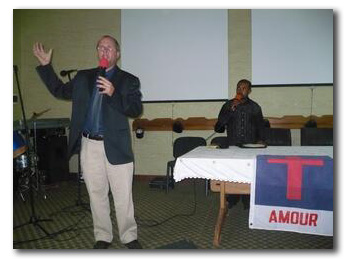 Christian education and discipleship deal both with heart and mind. When the heart is changed, the moral direction of a man is re-oriented and his mind is transformed and renewed. The old presupposition—that we have to appease, or live in fear of, our ancestors, who control the spirit world—is gone. Rather, the new presupposition—that God, the Creator, exists and has spoken to man through His Word, the Bible, and that we are saved by His grace and not appeasement (works)—is a revolutionary thought which changes him personally, his family, and his society as a whole.

Further, these Christian men believe that God has given us a moral Law. Those who don’t obey these, such as the rapists, murderers, thieves etc., need to be punished. And so, even in Africa, laws are being passed that are totally contrary to old tribal custom. They are from God’s written Word. Ask any African if he’d prefer to live under God’s Law, which brings freedom, or man’s law, which brings slavery, and you can be sure he’ll vote for God.

Two hundred Zimbabwean farmers voted with their feet and moved from communist Zimbabwe to Christian (and free market) Zambia. They turned the economy around from that of a net importer, to a net exporter, of food.

We need to be honest here; the societal changes we’ve seen in other nations transformed by the Gospel and discipleship have been particularly slow in occurring in Africa. This may partially be due to the prosperity ‘gospel’ espoused by televangelists, that obedience to Christ brings monetary blessings; and also the lies of liberation theology, which claims that the teachings of Jesus Christ must be interpreted in terms of liberation from unjust political conditions.

Europe did not become great because Europeans are white, and Africa cursed, because we are black. Europe’s greatness was due to the preaching of the Gospel message, discipleship, the forming of Protestant city states and the Reformation. It’s not about Race, it’s about Grace!

And so, slowly, but surely, one person, one family, one tribe, one nation at a time, we missionaries, pastors and Christian workers are reaching the lost with a message – the Gospel of Jesus Christ – that will not only change their destiny after death, but completely transform their lives while they live.

This is our hope; to see Africa “filled with the knowledge of the glory of the Lord, as the waters cover the sea.” Habakkuk 2:14