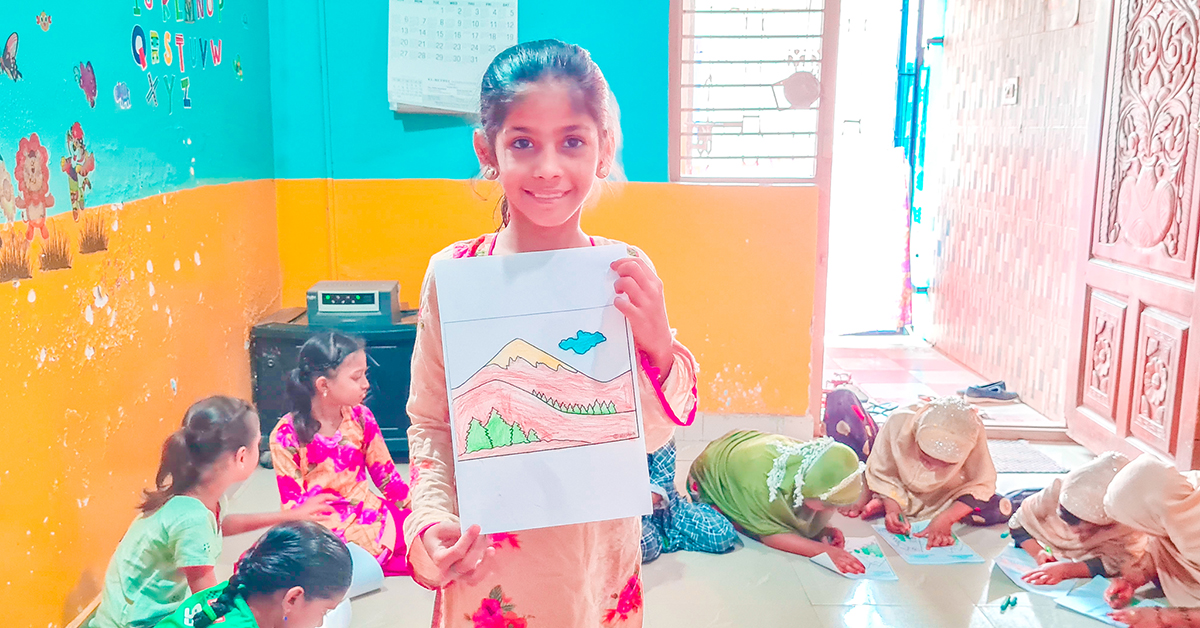 The girls had been eagerly looking forward to this week when they could attend camp at David and Taru’s ministry facility, the Deepam Center for Women and Children.

It was only 9:30 in the morning, but beads of sweat formed on the forehead of ITMI’s Taru Kumar.

She sat on a plastic chair in a small tin-roofed room, flanked on each side by a standing fan. In front of her, a group of 8-15-year-old girls sat on the colorful rug that covered the cement floor.

Behind her was a small poster made of construction paper. Cut-out mountains were brown against the blue background. The words read, “Faith Moves Mountains,” which was the theme of the week-long summer camp.

The girls had been eagerly looking forward to this week when they could attend camp at David and Taru’s ministry facility, the Deepam Center for Women and Children. 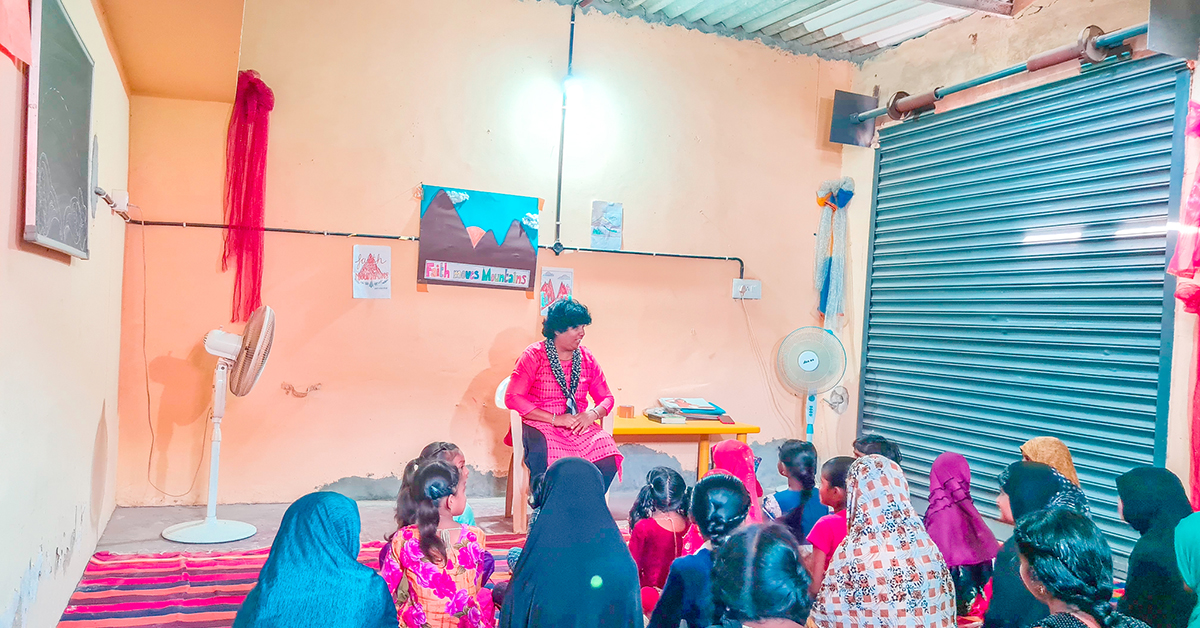 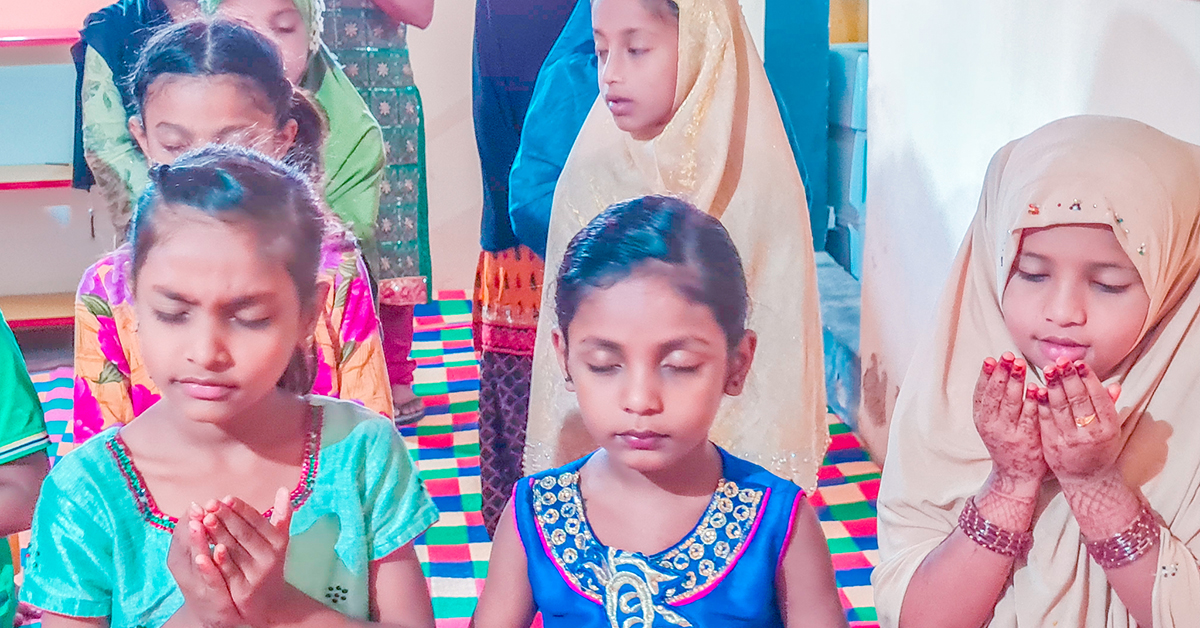 It had taken Taru a few minutes to get the girls quiet for the opening prayer, but eventually, they stood with devotion and respect.

When they were all seated again, Taru told them the story of Jesus healing the paralytic from Luke 5: 17-26.

“Your problems may be as big as a mountain, but Jesus can move them when you have faith in Him,” she told them.

The problems many of these young girls face daily aren’t insignificant. Deepam Center is located in Modi Road slum in Bangalore, India. Locals refer to this section of Bangalore as “Little Pakistan” because most families living there are Muslim.

Most, if not all of them, live in lean-tos and shacks in the slum. Most have dirt floors and just one or two rooms shared by the whole family, which is quite a few people in some cases.

Their families often struggle to provide meals and other basic needs for their children. Some of them could face getting married very young - and soon. 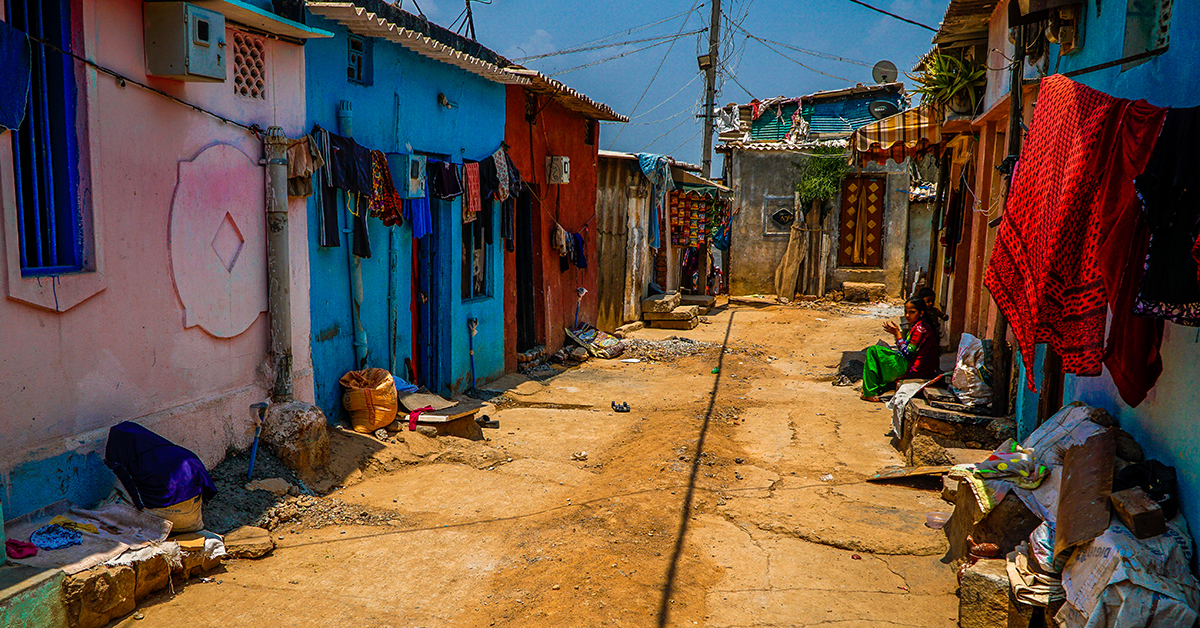 Most, if not all of them, live in lean-tos and shacks in the slum. 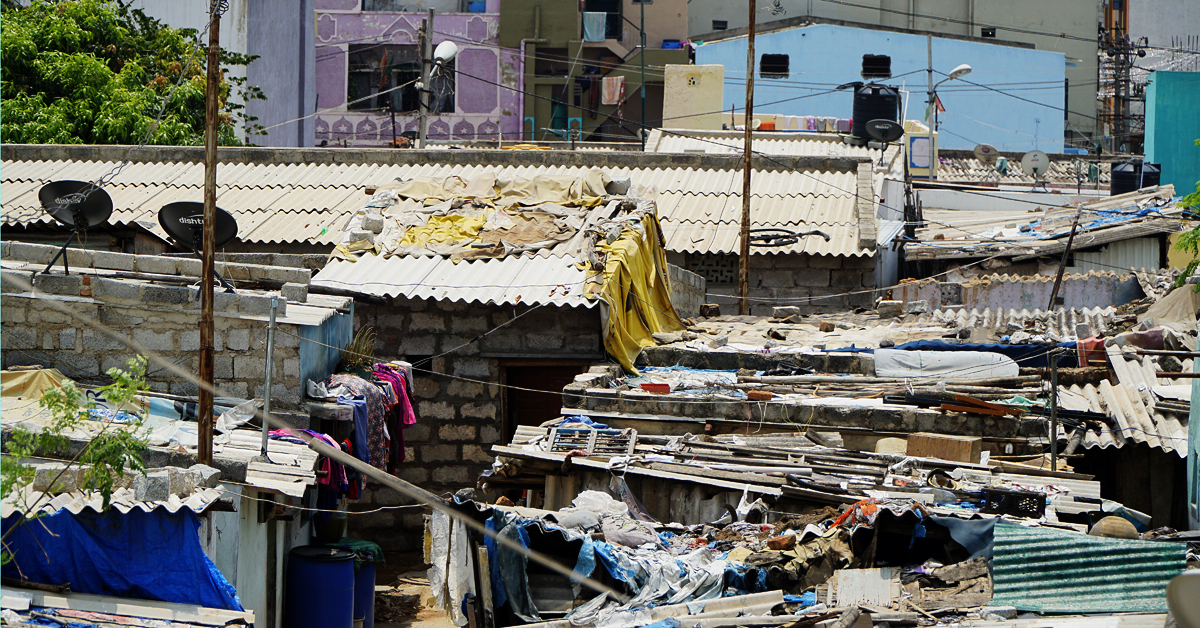 Lean-tos and shacks crowd together in Modi Road, Bangalore 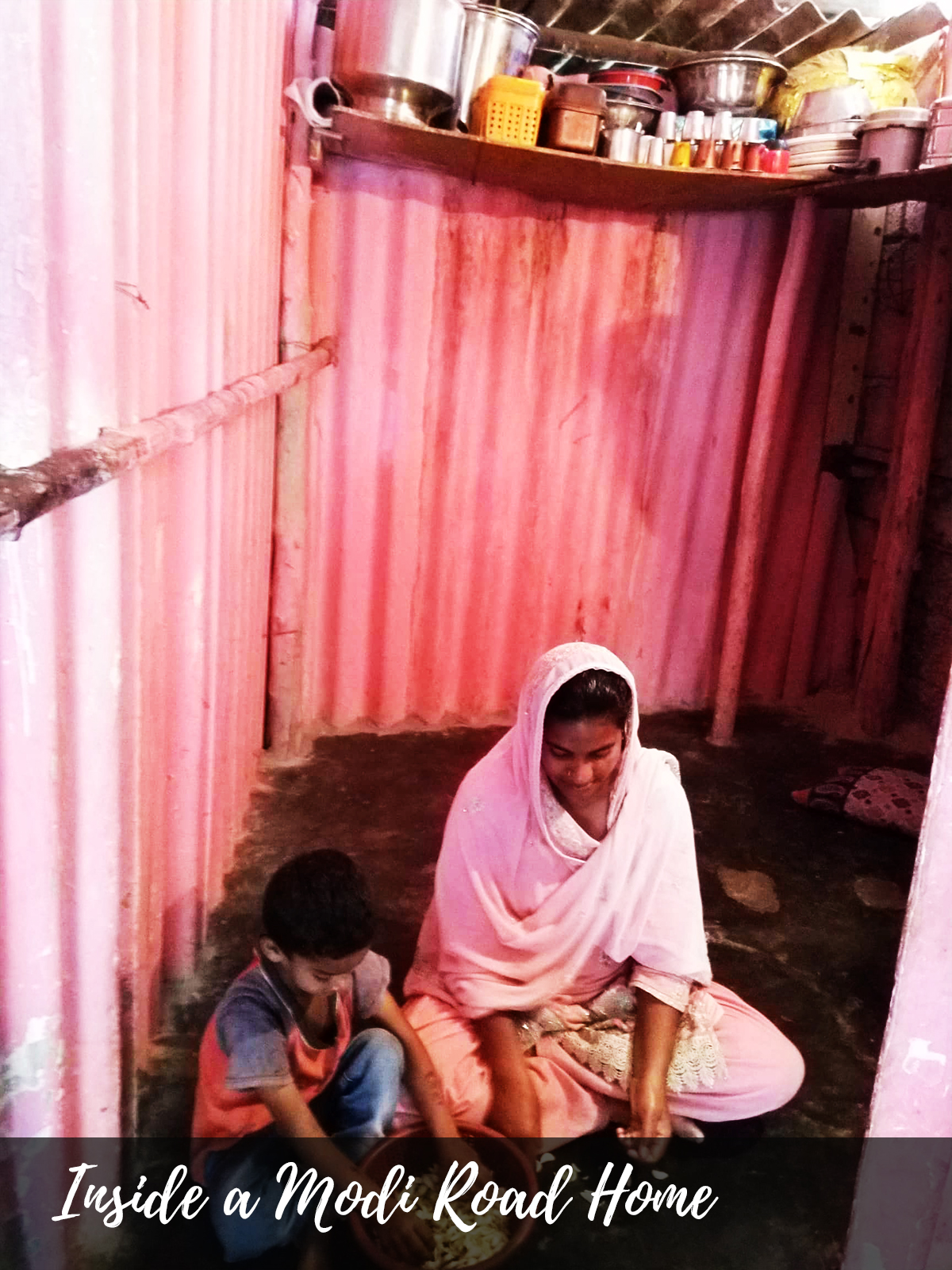 When Taru asked if any of the girls would like to repeat the story, both Taru, and her husband, David, were encouraged when one young lady, Amreen, repeated the whole story accurately in her own words using the picture book!

Next, David told the girls the story of creation, sin, and how Jesus came to take away the sin of everyone who has faith in Him.

After David finished, Taru divided the girls into two groups for activities. The younger girls enjoyed a painting activity, while the older girls delighted in making purses from foam sheets.

When they’d finished, each girl wanted a picture of herself, proudly holding her creation. 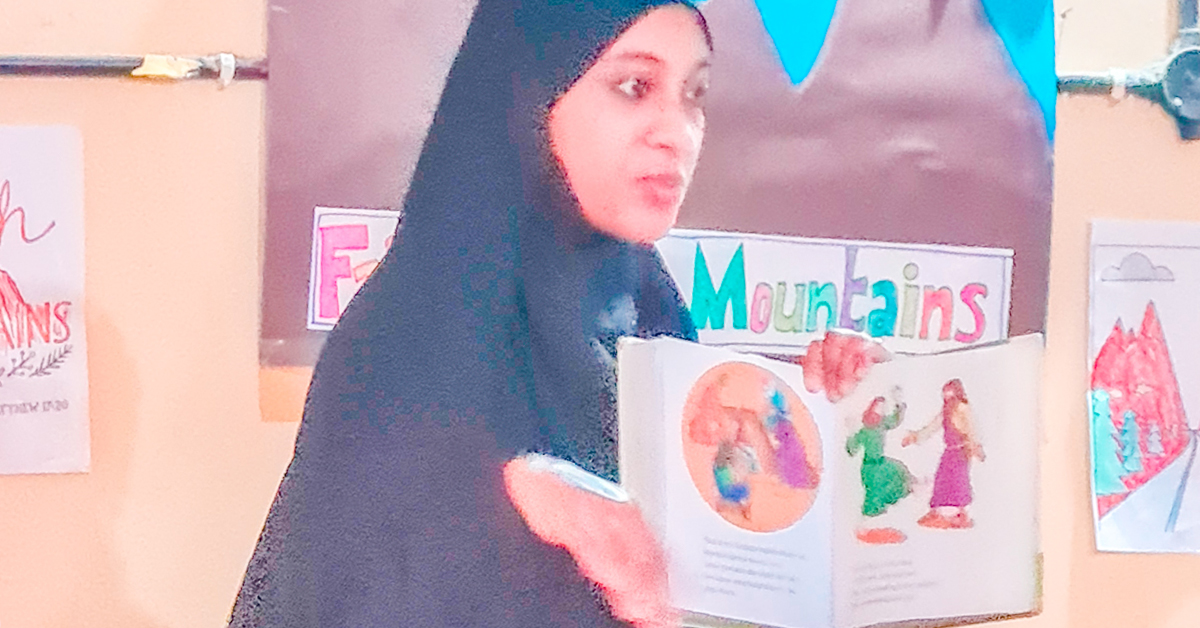 Amreen tells the story in her own words. 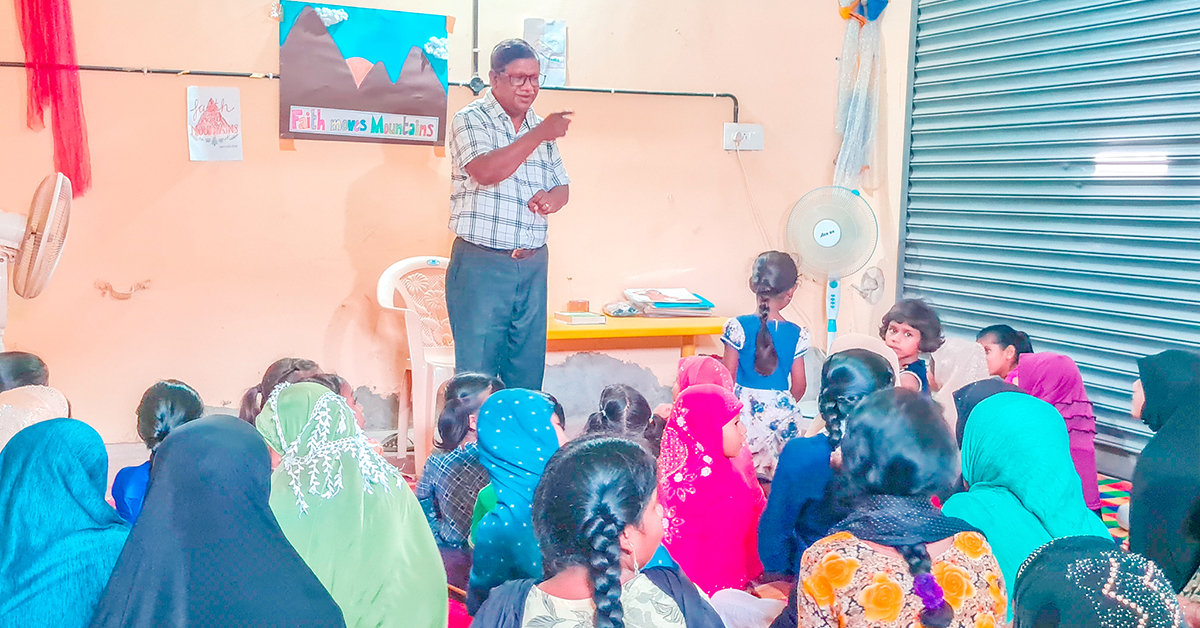 David shares about creation, sin, who Jesus is and what He's done and waiting to do for those who put their faith in Him. 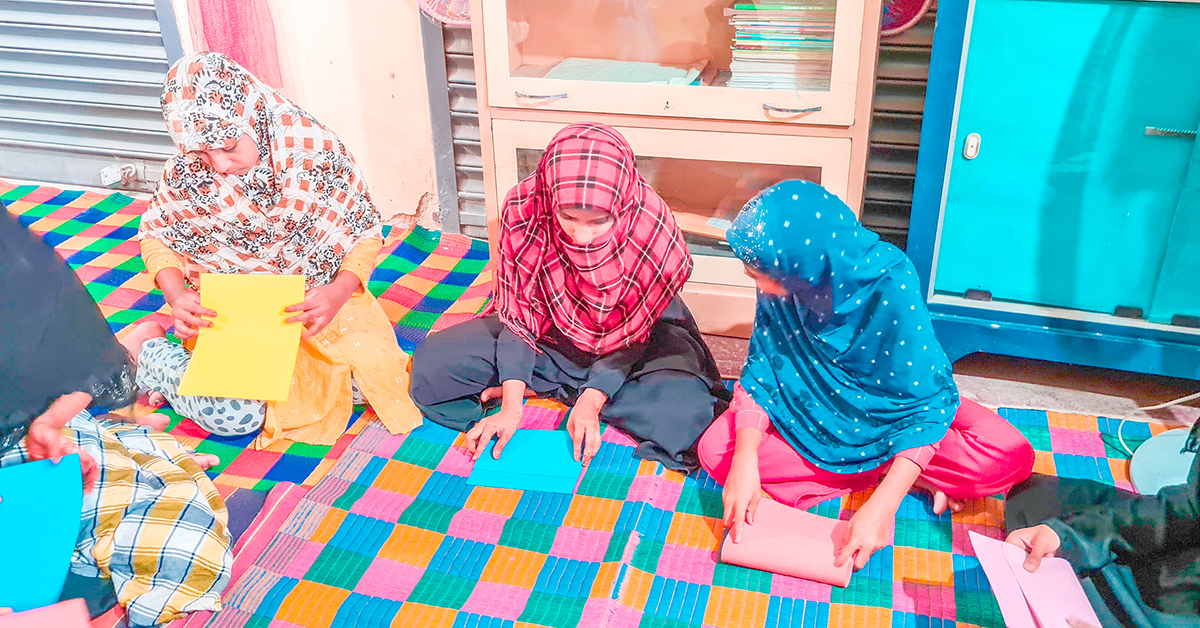 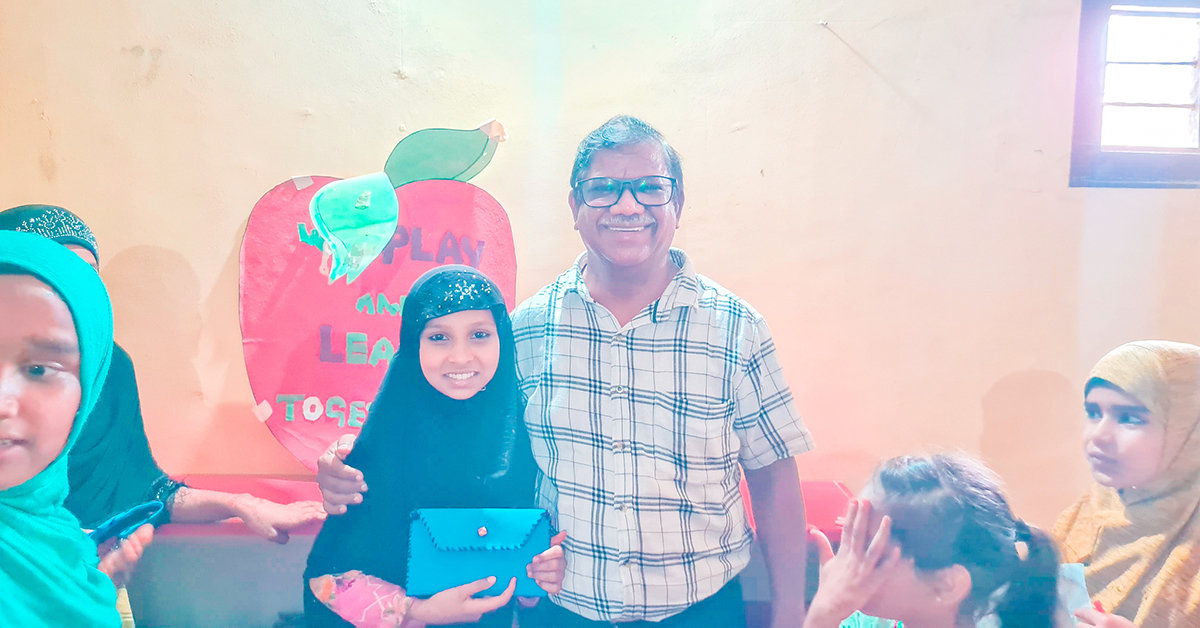 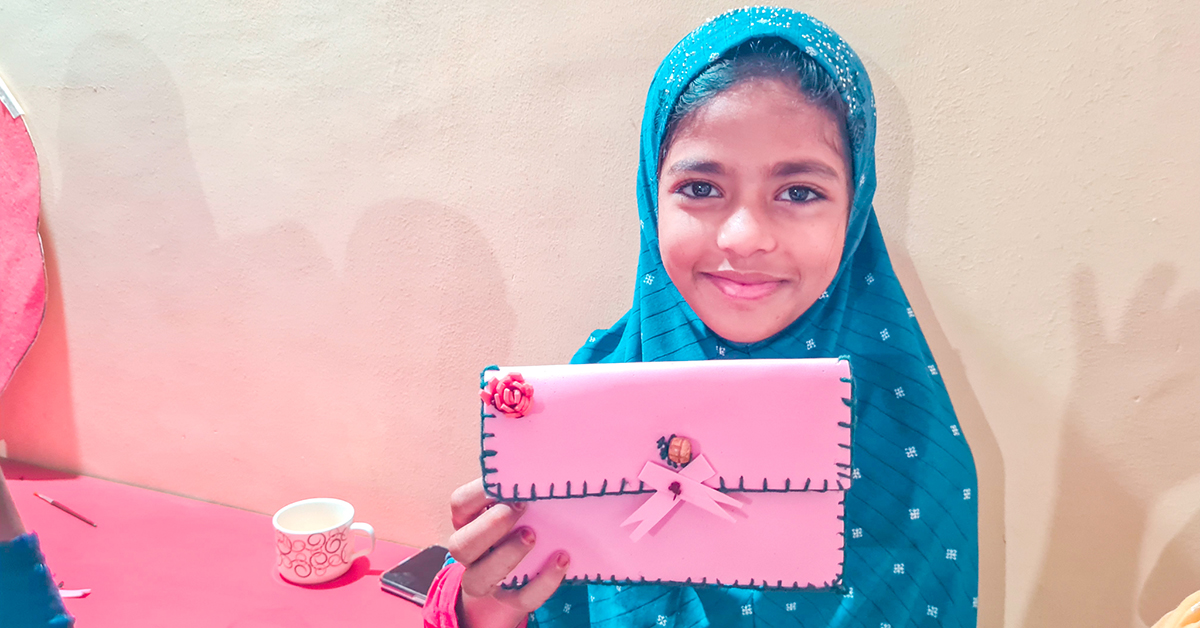 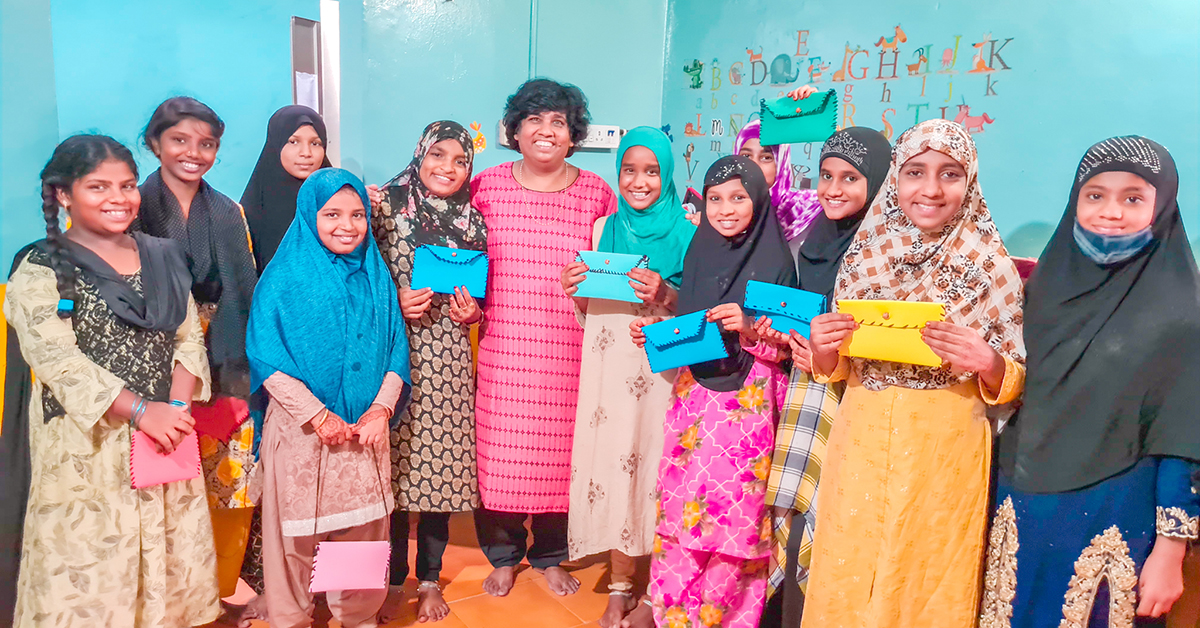 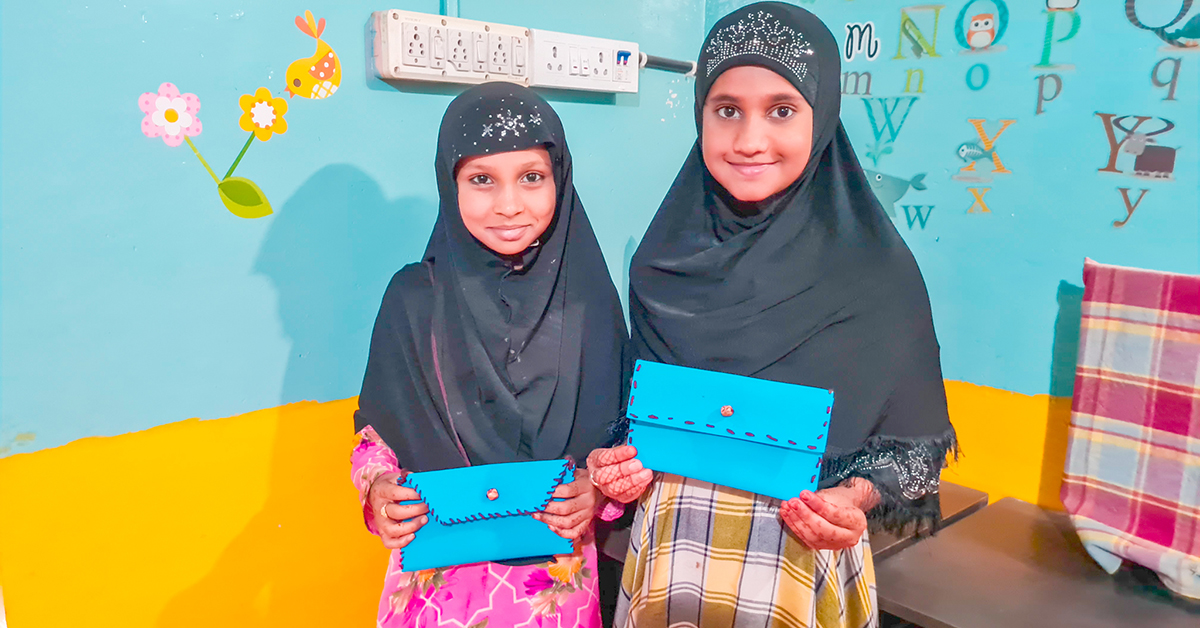 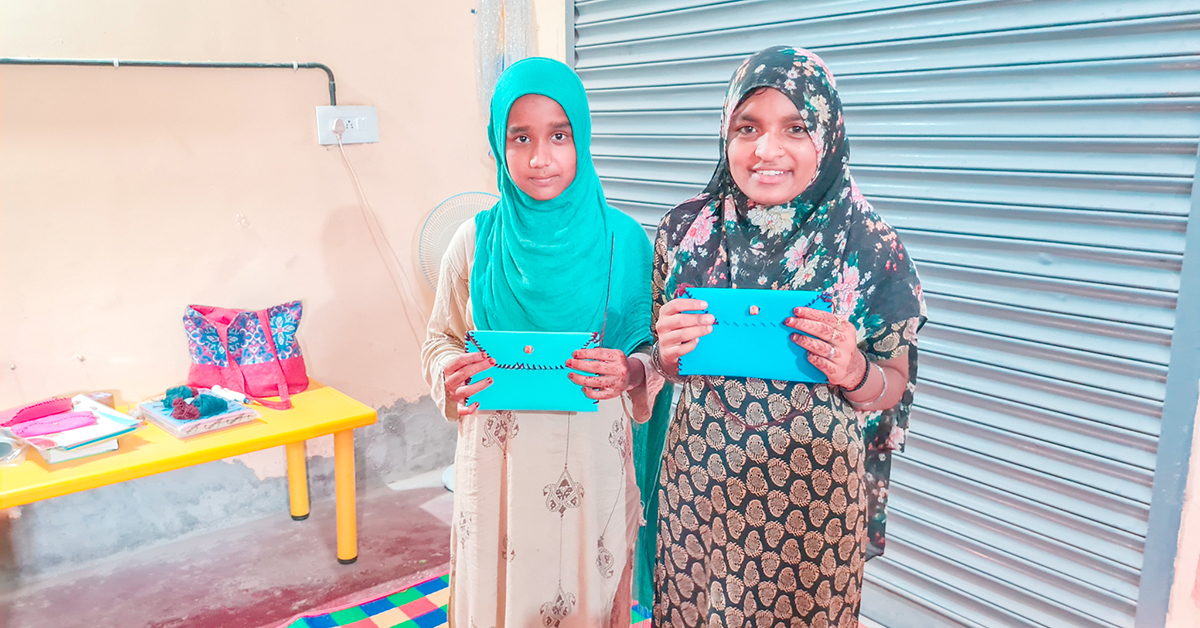 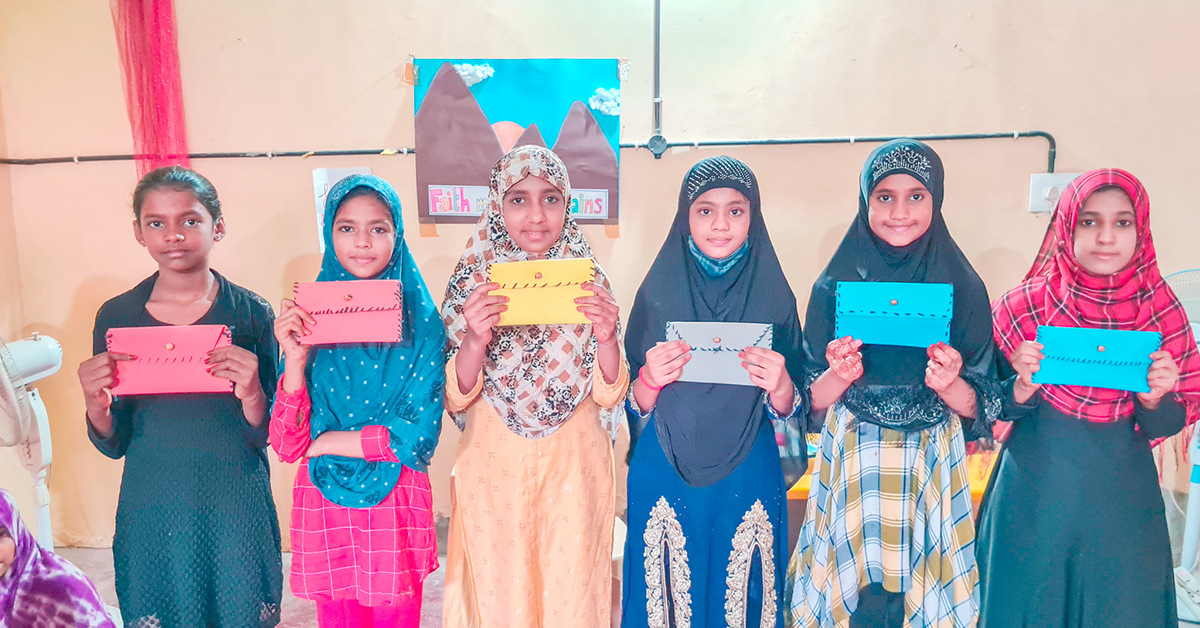 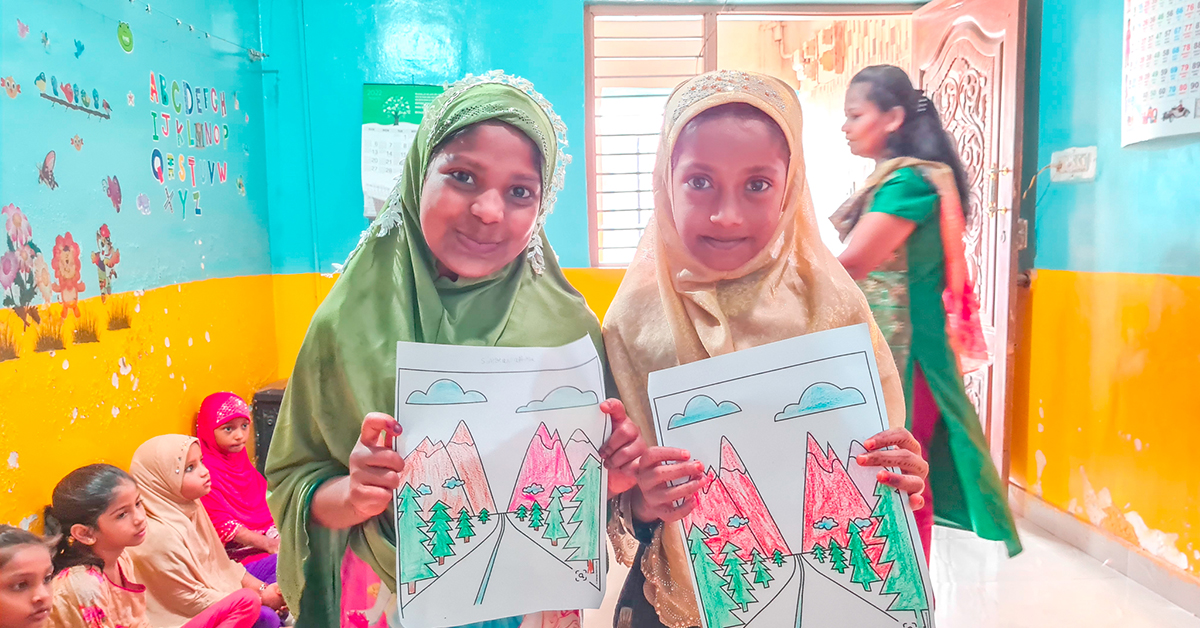 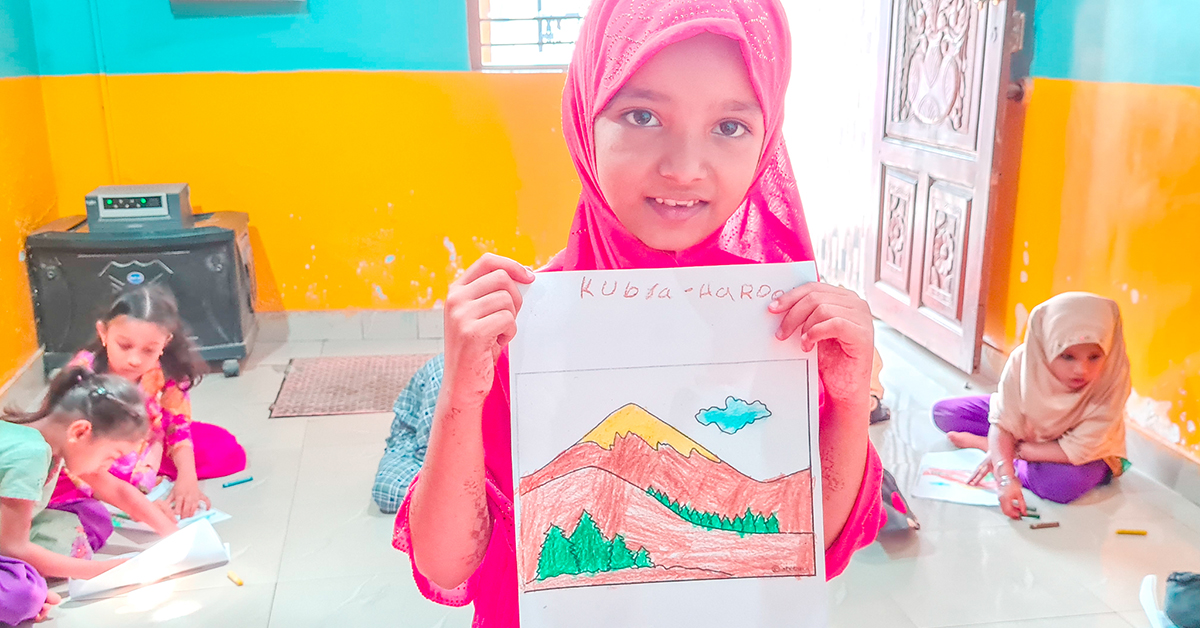 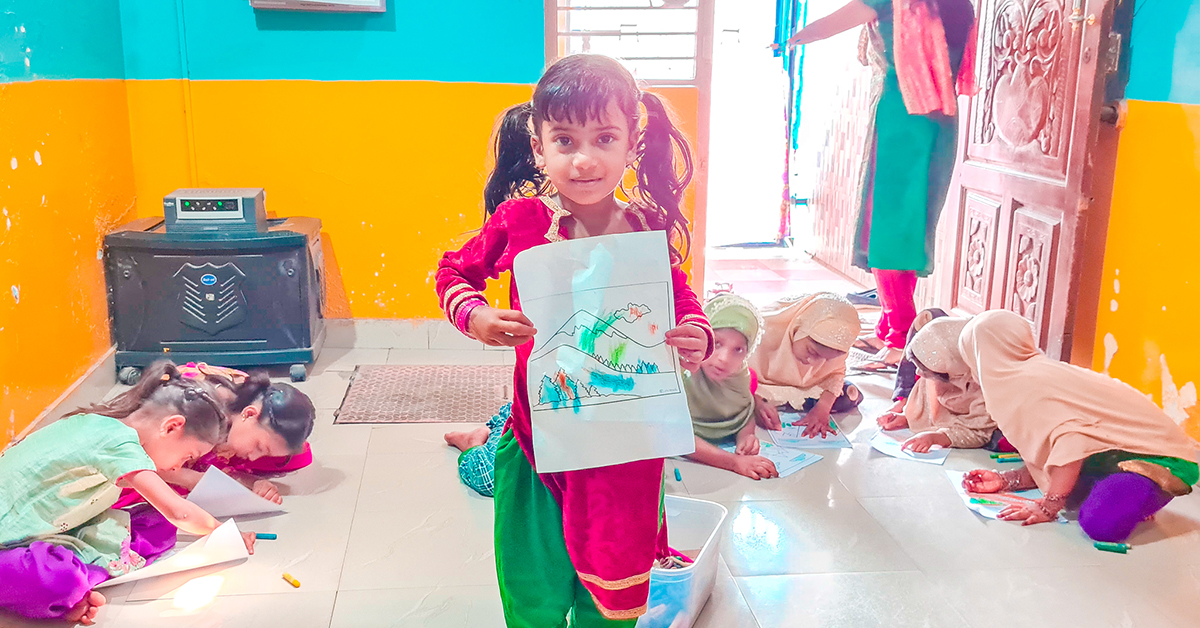 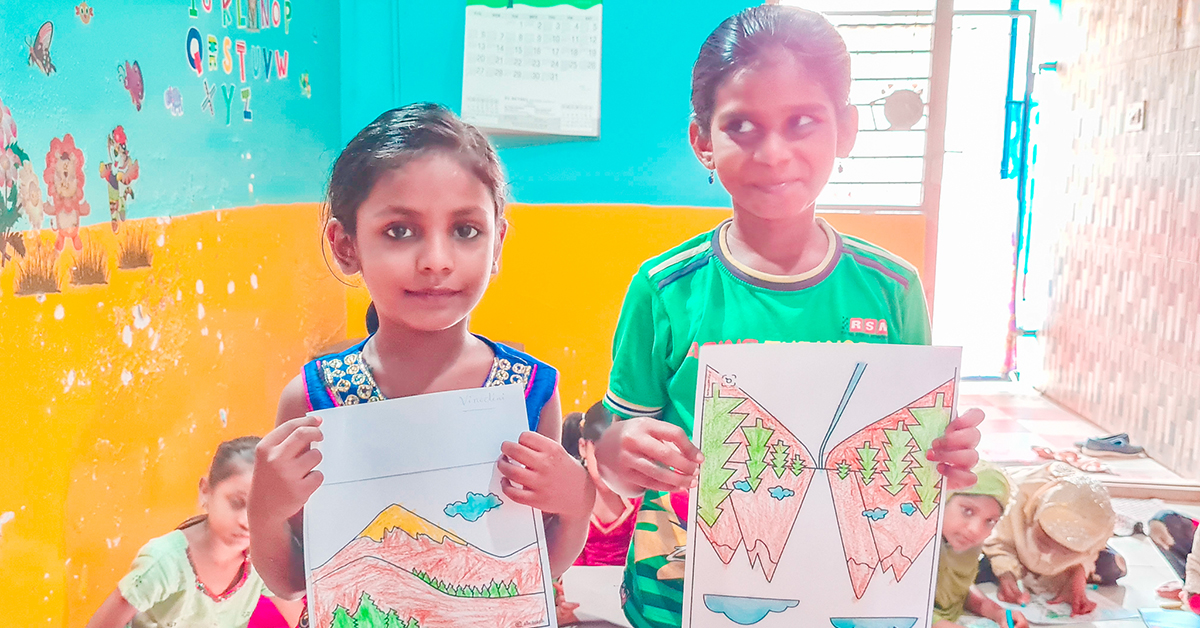 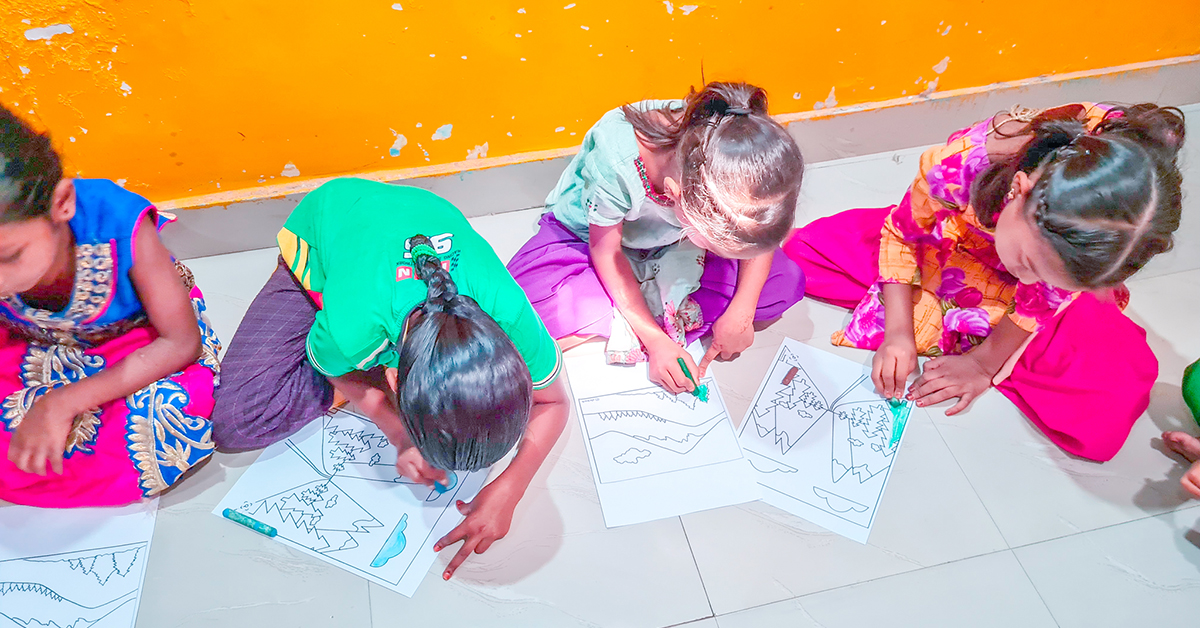 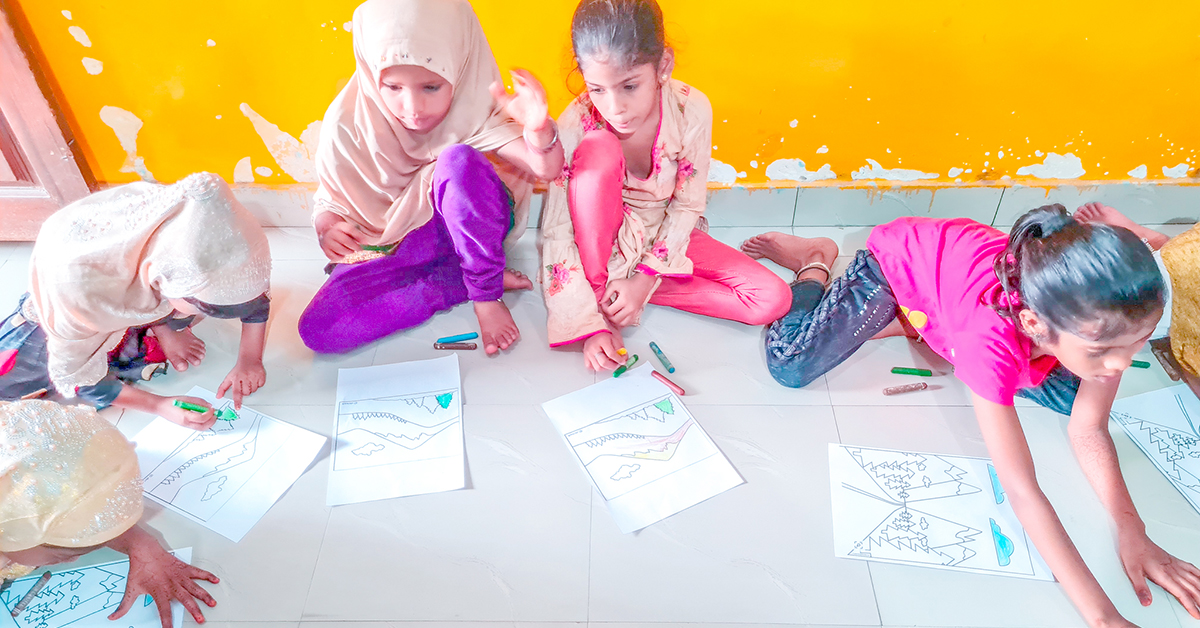 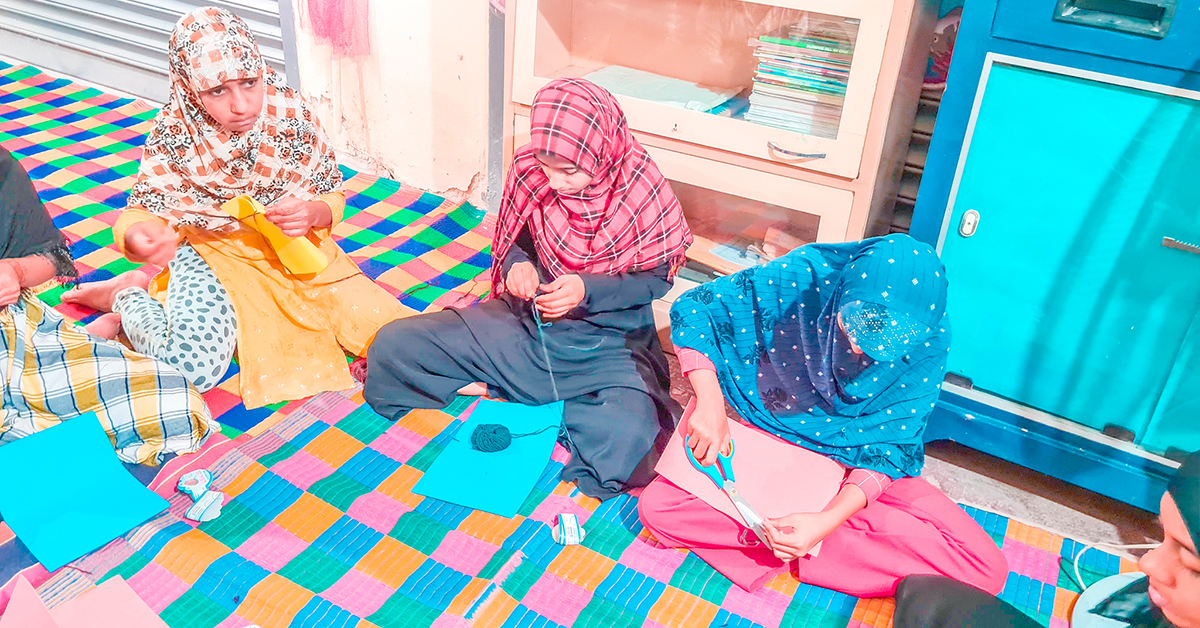 After the activities, a few of the older girls approached David. They wanted to know more about sin and forgiveness.

“We read our Qu’ran, but we don’t understand what is written because it is in Arabic (which we don’t know), but the Bible is easy to understand,” one of them observed.

“Please pray for these beautiful children. They are very precious,” David pleads, “Pray that whatever they heard from us will work in their hearts and lead them to Jesus.”

PARTNER WITH DAVID AND TARU KUMAR