This article was originally entitled "Preaching Heresies No Longer " and published in the September 2011 edition of ITMI Monthly.

Pastor Nizeye's story comes to us from the International School of Missions in Kampala, Uganda. ISM was founded by ITMI parter, Muhindo Kawede.

It was in the year 2000 that I was convicted by the Holy Spirit, and I heard that the day of Judgment was coming. This led me to repent of my sins, and I trusted in the Lord Jesus Christ.

I immediately started a church in Kampala, Uganda but because I was untrained, I failed to teach and disciple my members. In six months, the church was closed down because I had no knowledge and experience of God. I knew God had called me, but I lacked the words to feed His flock.

I wanted to serve my Lord with all my heart, but I had no knowledge of His word or how to share Christ with other people.

I started preaching on the streets of Kampala without knowing God’s sound doctrine or even which book of the Bible to open. Because I had no biblical training, I sometimes preached heresies on the streets and in the market places.

While preaching on the streets, God provided me with a woman who became my wife. After our marriage, I continued with street evangelism and God’s favor was upon me because I heard how ITMI's International School of Missions (ISM) was training and equipping pastors in Kampala. I praised God that I could be trained!

The training from ISM has helped me realize my dream; to establish a national center of evangelism where we train evangelists and send them out to the whole world. By example, I have learned humility, discipleship and how to share Christ from the ISM leaders.

Academically, ISM has prepared me to effectively know the Scriptures, know what it is to be humble, and know the way of discipleship.

Now, I am gaining confidence in the Word of God and the discipleship of other believers from living examples and godly curriculum. Now I know what I didn’t know in the past. I am now learning how to start a church and how to disciple new believers.

I serve God in a cell group in Kampala where I apply the teaching I receive from ISM. Many have benefited from the teaching and are being transformed.

One such person was Mama Richard. She was addicted to alcohol. Mama Richard had marital problems, was confused,and desperate. After repenting and trusting in Christ, her life has been completely transformed.

She is now leading other women to Christ in her community.

Another person being transformed is Agnes Iga . She had become a Christian, but was struggling. Agnes Iga was fighting with her neighbors. She believed they were bewitching her. For protection, she started consulting a witchdoctor.

Agnes Iga joined my cell group and from the cell group, she learned about forgiveness and trusting God for His protection instead of turning to witchdoctors. Now Agnes Iga has found peace and reconciliation with God and with her neighbor.

Recently Agnes Iga testified that for her first time she shared food with one of her neighbors.

From Uganda, there are many such stories from those who teach others where to put their trust. They aren’t intentionally leading people astray in Jesus’ name.

They are doing the best they can with what they have, but unfortunately, they don’t always have the whole truth. That is the challenge that Muhindo Kawede set out to address with those at the International School of Missions in Uganda.

While ISM’s main mission is equipping pastors, many missions of mercy take place through ISM, its resources and its students. As the pastors become equipped, they disciple others with what they learn. This discipleship is leading to compassion in the communities of those they impact. Because the pastors have learned solid doctrine at ISM, their impact is not lacking either of the two crucial arms of ministry: acts of mercy and the power of the truth.

Part of the learning experience for ISM students is learning how to talk to people whom they meet on the streets about Jesus. Cawed joyfully shared that in two hours on their recent outing, the Lord was able to reach 20 individuals who now have a new life in Christ.

ISM students headed to the streets to share Jesus with anyone who will listen.

It hasn’t been an easy ride. Since it’s beginning in 2006, the school has seen its share of roadblocks and challenges from political opposition to financial hurdles that seem insurmountable.

The latest challenge ISM faces has to do with its location. On part of the small compound where ISM currently leases, the owner has again leased space to a night club, attracting prostitutes and drug dealers during all hours of the day, making the environment incompatible with Bible school operations.

Thankfully, through the help of ITMI supporters and ITMI Director, Steve Evers, the school acquired a 10+ acre piece of land. Kawede, resourceful and creative, with his team, has recently been able to make, on the property, 60,000 hand made clay bricks. With these bricks they hope to build some small classrooms on the land.

As administrator, teacher and mentor for all of ISM, Kawede's plate is quite full.

Lately, he’s had the added responsibility of recruiting, organizing and overseeing the brick-making work. If ISM is able to get the small classrooms built, they will be free from their night club neighbors, and from the expense and pressure of paying rent. 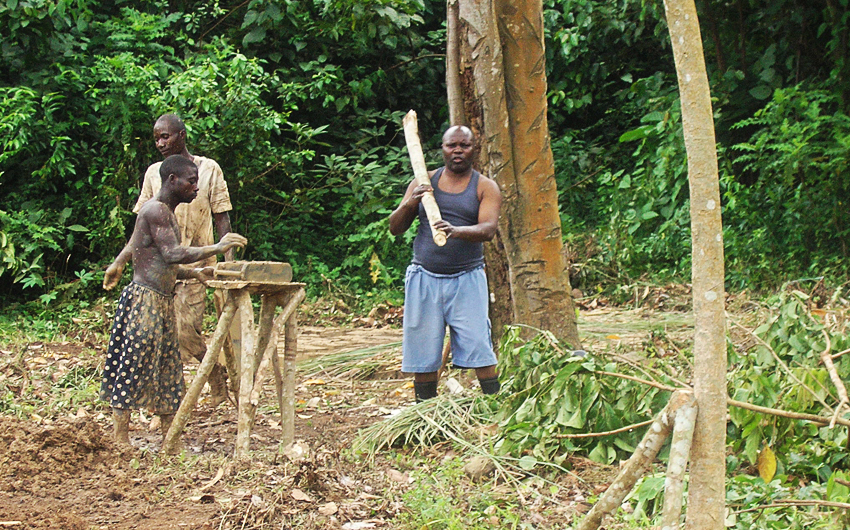 This will lift a huge burden from Kawede’s shoulders, allowing him to better focus on the students and on the mission of ISM. It’s
through the support and guidance of ITMI that ISM is demonstrating and declaring God’s Kingdom amid the prostitution, witchcraft, poverty and disease in Uganda.

It’s through your support and prayer that quality ministries operated by capable nationals like Muhindo Kawede are resourced, empowered and equipped for God’s work through ITMI.

Thanks for being a part of the ITMI family!

Editor's note: You may be asking, "What can I do right now to help Kawede and ISM?" Kawede has acquired most of the supplies necessary to build the four small classrooms and the male/female latrines.

What he needs now is to have a local contractor come and pour concrete and construct the buildings. Kawede has negotiated a construction price of $3200 for each of the small classrooms and the latrines.

That is $16,000 that is needed so that Kawede can continue ISM's teaching uninterrupted. Not everyone is able to help Kawede finish a whole classroom, but if we had (16) people who could help Kawede with $1000 each, the ministry of ISM will be launched into a whole new level of God honoring and Kingdom building service.

Muhindo Kawede with an ISM student.