This article was originally published in the June 2016 edition of ITMI Monthly. 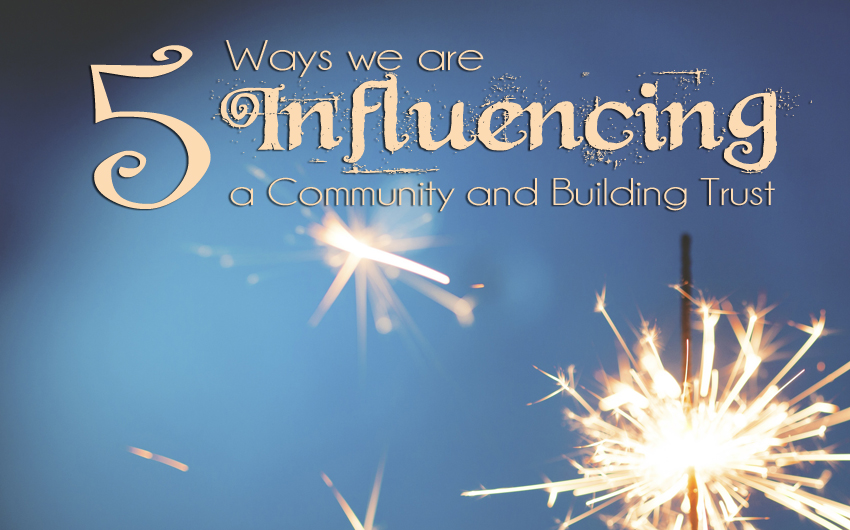 “When we came to Onseepkans, the Lord gave me a portion of Scripture over and over again,” ITMI’s Gerhard le Roux said in a recent interview.

Thus says the LORD, "In a favorable time I have answered You, And in a day of salvation I have helped You; And I will keep You and give You for a covenant of the people, To restore the land, to make them inherit the desolate heritages;

Saying to those who are bound, 'Go forth,' To those who are in darkness, 'Show yourselves.' Along the roads they will feed, And their pasture will be on all bare heights.

They will not hunger or thirst, Nor will the scorching heat or sun strike them down; For He who has compassion on them will lead them And will guide them to springs of water. – Isaiah 49:8-10.

This is exactly what the le Roux family is doing. They are teaching local people how God can set them free!

One of Gerhard’s primary projects is food production through gardening and raising milk goats and sheep for meat. He and his family try to be self-sustainable through small-scale farming, and teach others to do the same, as well as they can.

An out-of-the-ordinary early summer has prevented plants from growing properly. Daytime temperatures are soaring above 108o F.
Gerhard has tried shading his fruit and vegetables and watering them, yet the plants are overheated and cannot germinate properly.

“It is very weird, like there was no spring. The plants like the spring, but it went straight into summer,” he said.

Talitha le Roux with one of the family's goats.

The garden at Onseepkans Mission.

Gerhard and his godly wife, Elmane, and their eight wonderful children moved to Onseepkans and founded Onseepkans Mission in 2011. Since then, they have made influential friends among other farmers and community leaders.

Slowly it is paying off.

South Africa is going through a period of drought. All indications show that there are difficult times ahead. Food prices, especially fresh produce, will experience sharp increases. Already potatoes have doubled in price, and this is just the beginning, Gerhard said.

There is a community leader, an influential man, “...we have developed a relationship with him,” Gerhard said.

This man was moved when local people gathered for a prayer meeting for rain, and Gerhard was asked to pray. Shortly thereafter they had a wonderful rain and the whole area greened up. This was a tangible sign of the power of God to the community leader and to the people.

When God caused the rain He also watered the Gospel seeds planted in the community, which will hopefully bear the fruit of salvation for many.

Step by step, Gerhard and his family are spreading the influence of Christ among a people who are in bondage to sin and a dark worldview.

Allow Gerhard to explain in his own words.

“We have a group of children that regularly come on Sundays, in whom we built into spiritually,” he said.

The Gospel is going out to people of every age group. 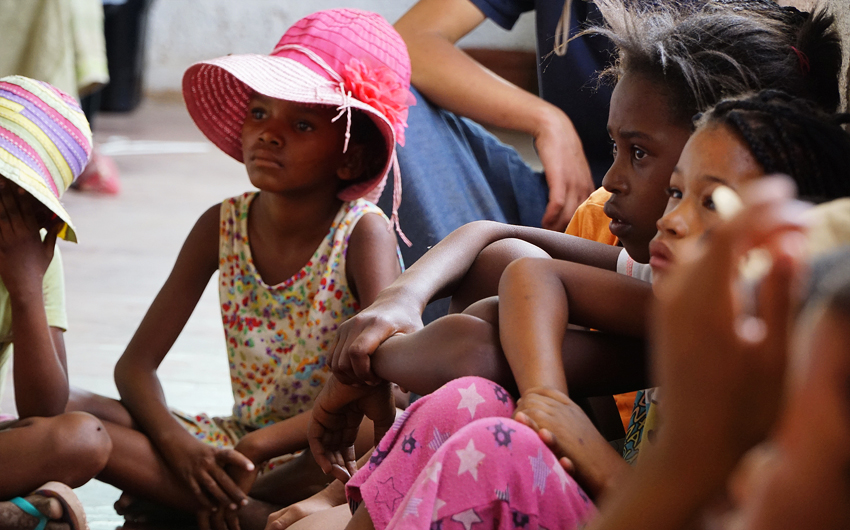 Kids from the community come to Onseepkans Mission, where they are valued, do fun activities and hear from the Bible. 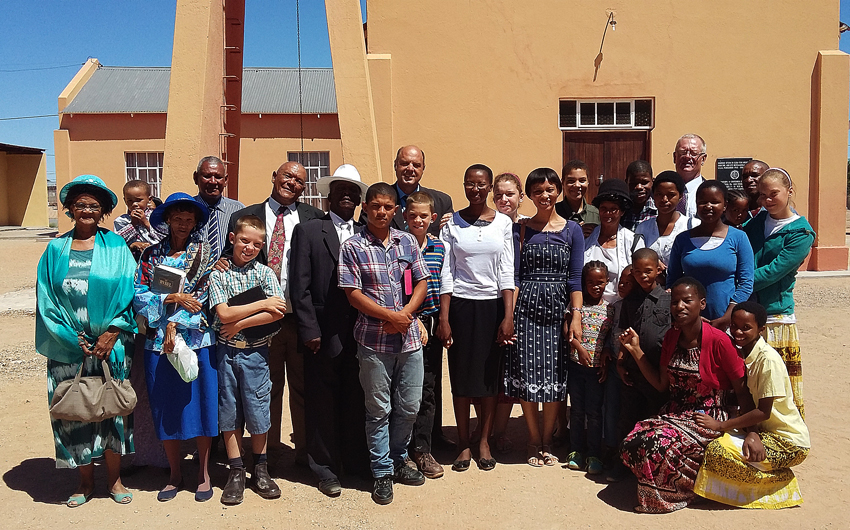 The Moreson Farm team with the le Roux family.

Among the team members was a faithful woman named Lydia, who herself had met Christ in 1996 at a youth camp at Moreson Farm. She has been serving with Moreson ever since. Lydia and Beauty were influenced by Gerhard in years past.

Beauty is like an older sister to his children and Lydia helped raise the le Roux children.

Denzil was a new Christian, having come from a gang and drug lifestyle. Now he uses his testimony of God’s grace to invite others to seek new life in Christ. Andre, himself a recent convert to Christ, also gave his testimony. Uncle George, co-founder of Moreson Farm with Gerhard, shared, too.

Three teams, made up of the le Roux children and the Moreson team, went out morning and afternoon each day into the three local neighborhoods, visiting door-to-door and at the local health clinic.

“The Lord went before us, opening people’s hearts, and the people welcomed the teams. The results were that we prayed for many people and we discovered many people who needed discipleship. Also, two young men went back to Moreson with the team for spiritual guidance,” Gerhard reported.

Because they have grown and sold lucerne (hay), the le Roux family has many relationships with local farmers. Such relationships are very beneficial, providing commerce, communication and fellowship. Several local farming couples have taken a shine to the eight le Roux children and gave Christmas gifts to each of them this year.

A local farmer who buys lucerne also recently sold Gerhard some sheep. Gerhard had planned to buy a ram, but after the farmer and his wife discussed the deal, they decided instead to give them the ram as a gift.

To that they added two boxes of fruit jam for the le Roux family.

Building relationships with locals cannot be emphasized enough. Commercial sheep farming is the most longstanding economic contribution to the area. So it is also a point of contact for Gerhard among the farmers.

“The other day I went to a local shop to buy a cool drink for the wife and children. A man in the queue began talking about a politician in the Western Cape. I told him that what people need more than politicians is the Lord. He asked who I was.”

When Gerhard told him his name, the man said, “I know you from church in Pofadder. I heard you speak and I like what you had to say.”

Step by step, the influence of Christ is growing in this small, isolated desert community.

5. Demonstrating the Gospel at Local Outreaches.

Gerhard is serving on the local health committee of the medical clinic. Through ITMI’s help, the family also had multiple opportunities to give gifts in the community and demonstrate hospitality last winter.

“We won more trust from the community,” Gerhard said of one of the events.

It is important to understand that Gerhard is a white Afrikaner. He has gained so much respect among the church leaders in the area that the all-colored Pofadder church leaders trust him to shepherd their members in Onseepkans, even though he is not even a member.

Little by little, God is expanding their sphere of influence and allowing His Word to go out in Onseepkans!

What You Can Do

Pray for the light of the Gospel to fill the culture of Onseepkans, and all of South Africa. Pray that people will respond by faith in Christ. Petition for the le Roux family to have endurance and joy as they obey God in this work.

If the Lord leads you to help Gerhard and his family, they will faithfully use it to share God’s truth.

Yes! I'm feeling led to help Gerhard and his family.

Steve Lee is a long-time friend of Steve and Darlene Evers. Steve runs a small business in Prescott, Arizona where he also serves his church as a deacon. He is passionate about missions and telling ITMI partners’ stories.

On his first trip to Africa, Steve almost tipped over in a canoe on the Zambezi River and amazed his traveling partners with his ability to handle African food! With his ability to easily engage and make friends, he was a great asset to the team.