The first days of summer camp 2017 were rough. It was early August. Instead of the normal anticipation and excitement that should have shrouded the beginning of the week, a cloud of negativity hung over the camp like smog.
Eighty-one campers, age 8-12 had congregated for a week of summer camp fun outside of Poznan, Poland.
Eleven campers were from a program specifically designed for children who have suffered the most blatant and harsh neglect or abuse. Nine or ten more were hailing from home situations where abuse and neglect was suspected but not yet verified.
Their understandable mistrust of most adults injected a dismal atmosphere throughout the camps first day activities.
ITMI's Jim La Rose was serving as the English teacher for this camp.
A seasoned teacher and native English speaker, Jim also has quite a bit of experience with children from heart-wrenching backgrounds.
For quite a few years now, Jim has been making weekly visits to the dom dziecka or group foster home near his home and investing in many of the children in care there.
Jim takes them to town for burgers, fries or shakes, brings care packages for the older "aged out" kids who don't receive the same provisions as the younger ones, and has had several of them visit his home for a week or more at a time.

ITMI's Jim La Rose with boys in care of the Polish state. 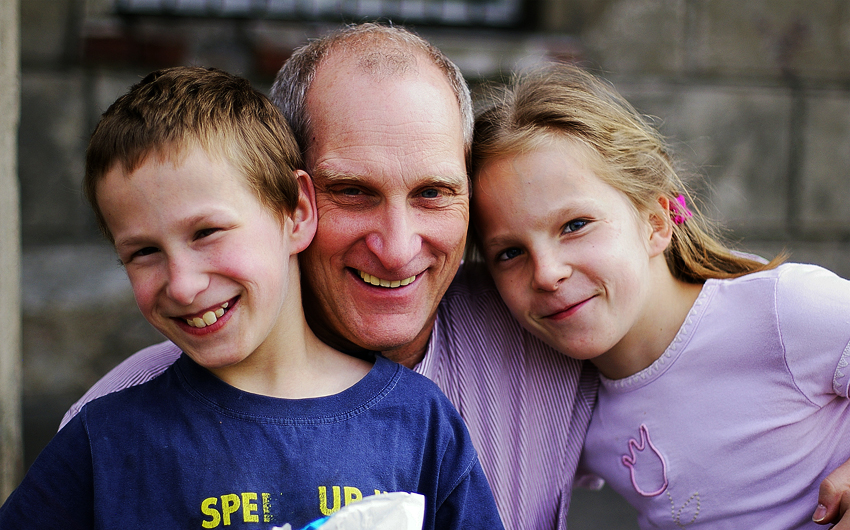 Jim with a couple of the kids from the dom dziecka on a weekly trip to the local burger stand. 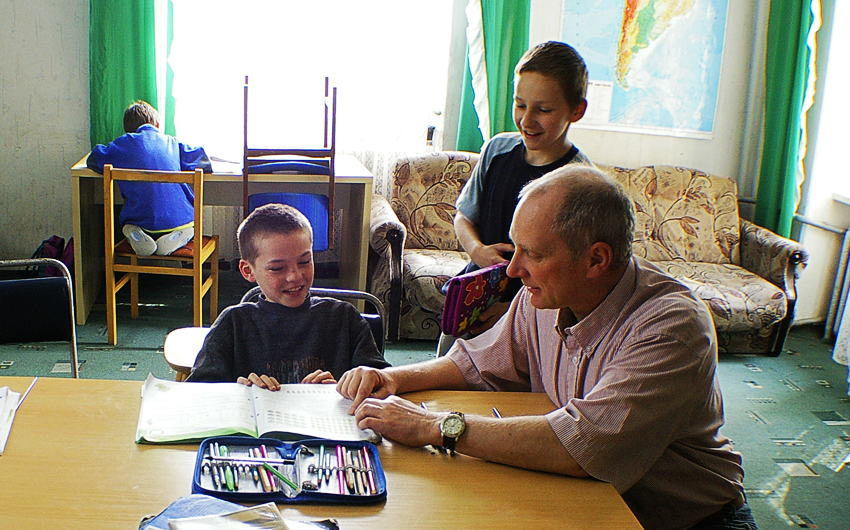 Jim helping with homework at the group home.
He had even arranged for one of the boys from the group home to come to summer camp with him.
Heart-broken in thinking about what many of them have endured, Jim felt led to speak to the staff about the specific needs of the group at their staff meeting on Monday night.
He knew that many of the most hardened, guarded and distant kids were struggling just to survive in a life where no adult is uniquely committed to them or their needs, and led the staff in rejoicing that the Lord had specifically placed those individual children here for a reason.
"It seems the Lord gave the words that deepened the staff’s perspective on both the privilege we have in loving these kids into relationships with the Heavenly Father who created them and loves them beyond our comprehension," Jim reflected.
On Tuesday morning, one of the other staff members suggested each staff member become a prayer warrior for 2-3 kids.
"[The boy] from the dom dziecka, of course, is already on my daily prayer list. For my other two kids, I chose the two of the toughest boys, both 12 years old, and both very resistant to relationships with the adult staff members," Jim said.
How the Walls Began Crumbling
Most Polish kids love American peanut butter, but rarely get to eat it.
Jim's English lesson for the 12-year-olds was a taste test peanut butter with a myriad of add-ins. Jam, honey, bananas, apples, chocolate and marshmallows are all easy favorites.
But that wasn't all.
They also tried peanut butter with cheese, potato chips, pickles and mayonnaise!
The kids have fun learning the English vocabulary for all the add-ins, as well as using English to discuss their ratings and opinions of each pair.
Both the two most distant 12-year-olds opted out of the taste test...at first. Jim just said, "Ok." But the rest of the 12-year-olds responded so positively to the first combination of peanut butter and jam that both boys decided to try it after all.
Through the lesson, Jim interacted gently and respectfully with them, and both ended up fully participating!
Later that afternoon, during a workshop led by another teacher, all three of the boys Jim had chosen to pray for were present. Jim was helping by passing out paper and pencils to kids sitting on the floor.
One of the boys voluntarily helped Jim pass out pencils, and the other responded to receiving a pencil with, "Thank you."
These might seem like very normal things for kids to do, but for kids who have been through what these have, and are so understandably guarded to be this open with an adult they don't know yet, these are mountains moving.
That evening, Jim's continued prayer - and responsiveness to the Spirit's leading - led to another positive interaction with both of them.
By the end of the camp, over two-thirds of the campers either made a first-time decision or a recommitment of their lives to Jesus.
None of the 3 Jim was praying for was among those, but by the end of the camp it there was definite evidence of the Lord's work in these three lives. There is even the possibility of a continued relationship with all three of the boys.
Before the camp ended, Jim received the court's permission for the boy he'd brought to camp from the group home to stay with him for a week during August.
Jim is making big strides and lasting impact in the lives of Polish children who so badly need positive interaction with adults. The importance of the hope and value that Jim offers those who may believe they don't have either simply cannot be understated.
It is your partnership that makes that offering possible.
It's your support that has reached into the lives of young Polish children and given them a taste of the truth that they are more cherished by their Creator than they could ever imagine.
It's your sacrifice that has made it possible for their paths to be crossed by Jim, reaching out on behalf of our Lord, who longs to walk next to them through the dark valleys and challenging paths they face.
Shadowy valleys through which one desperately needs a Good Shepherd, with his rod and his staff, to walk next to them.

"At the workshop, she gained an understanding of the Biblical principle of stewardship and began to change her habits and everyday decisions." intouchmission.org/2018/08/south-sudanese-widows-life-changed-by-biblical-training/?utm_campaign=... ... See MoreSee Less