This article was originally published in the April 2018 edition of ITMI Monthly.

We received the message days prior to our departure for Ukraine. It was a plea for help.

The request was accompanied by images of rubble and destruction. They’d heard we were planning to visit another nearby town.

Photos of destruction accompanied the request for help. 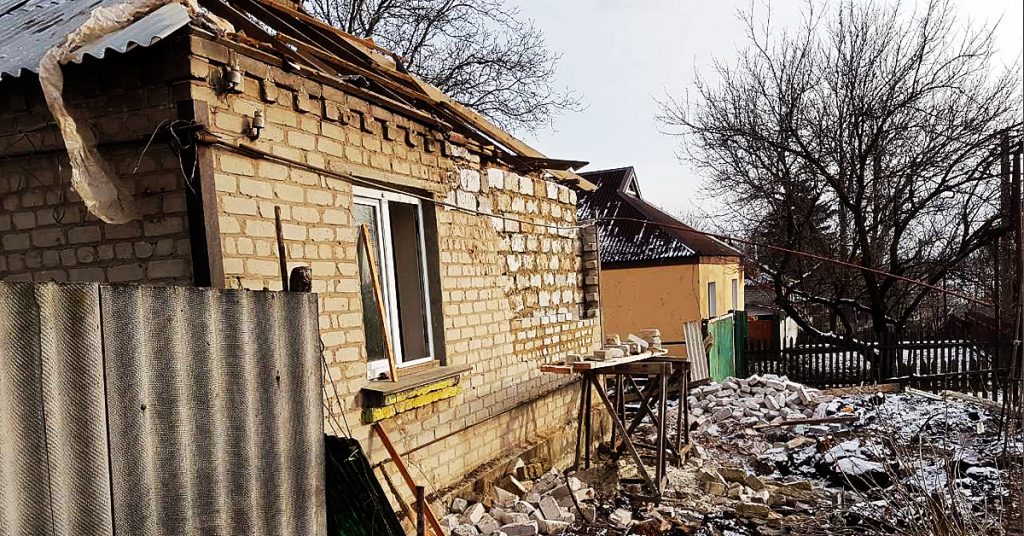 It came from a small church of 20 members in Novolugansk.  Novolugansk is right on the fighting line between Ukraine and the Russian separatists’ region of Lugansk.

The city was bombed on the 18th of January. Eight or more houses and one preschool building were hit. Little help came from the government. Therefore, families had to reach out with the little they had to repair their houses in order to keep the snow and bitter Ukrainian cold away.

Our planning was already done, our routes and places to visit were already scheduled, yet our hearts could not refuse the call to come and help.

We decided to include a morning visit to the believers in Novolugansk. It meant changing the itinerary, sleeping in the homes of local people, and not be able to leave the area during the night. Most of the bombing and fighting happens during the night!

Our team consisted three men from Oradea, Romania, plus the four Ukrainian brothers who were not only our translators and drivers, but also pastors in their local churches and our main connection with the area.

We boarded a tired and rusted 1998 VW Transporter van and traveled through the unimaginably damaged roads of East Ukraine to reach our destination.

As a main strategy, and exactly the way I have watched Steve Evers and ITMI operate these many years, I always try to work with and enhance the testimony of the local body of Christ.

With the help of the local church, we had prepared 120 family-size food packages that could feed a hungry family of 3-4 people up to 1-2 weeks.

After being stopped and questioned intensely three to five times a day at multiple military checkpoints, we arrived in Novolugansk.

Driving through the town, on our way to the church, we noticed groups of people slowly walking in the same direction. One of the Ukrainian brothers in the car said, “These people are coming to the church service.”

Once we got to the small church, we found a room already packed with people. There were at least 100 people from the town. Non-believers, whose lives are being rocked by the continual bombing in their area, responded to the invitation made by the local church members for a special church service.

Over 100 people from the town responded to the church's invitation to the service.

The echoing explosions normally would have kept many in their homes.

But their need for hope drove them to brave the open road to get to the church. The noise of the bombings went on for the entire service. And yet, the words of Jesus from Matthew 4:12-17 were read and explained in their presence.

After I preached the Gospel and prayed for them, I asked my translator, Pastor Vasily, to make the invitation for anyone who wants to receive Jesus in their heart.

Blessing people of Novolugansk with food packages after church services.

After the church service, we went to see one of the houses which had been hit by a bomb a few weeks ago. That was the home of a family of 5.

The mother of 3 explained to us that she was very happy that the children were inside with their father and not outside when the bomb hit the corner of their house and destroyed their car. The next bomb went straight into a nearby building, destroying walls and roofing.

We left the town around 1 PM! We needed to be in Bakhmut by 4 PM, where another meeting had been scheduled. We skipped lunch and drove subdued to the next meeting.

As we traveled away from the city, little did we know Novolugansk was being bombed again. This time the bombs took out the town’s electricity and three more houses were hit and severely damaged.

It is hard to wrap our heads around the hardships these communities and believers are enduring and the great needs they are facing. God’s answer for their pain is Himself and His people.

This is why the church is called to extend love and mercy to those in need, while the Gospel is also being preached.

Would you be willing to partner with ITMI and us in this great opportunity to provide necessities and be light and salt in the midst of darkness and poverty?

Dr. Adrian Ban and his wife, Ema, serve Romanian families by holding marriage counseling seminars as well as overseeing the children’s ministry in their local church. They hope to open a retreat center for families as a place of renewal for married couples.