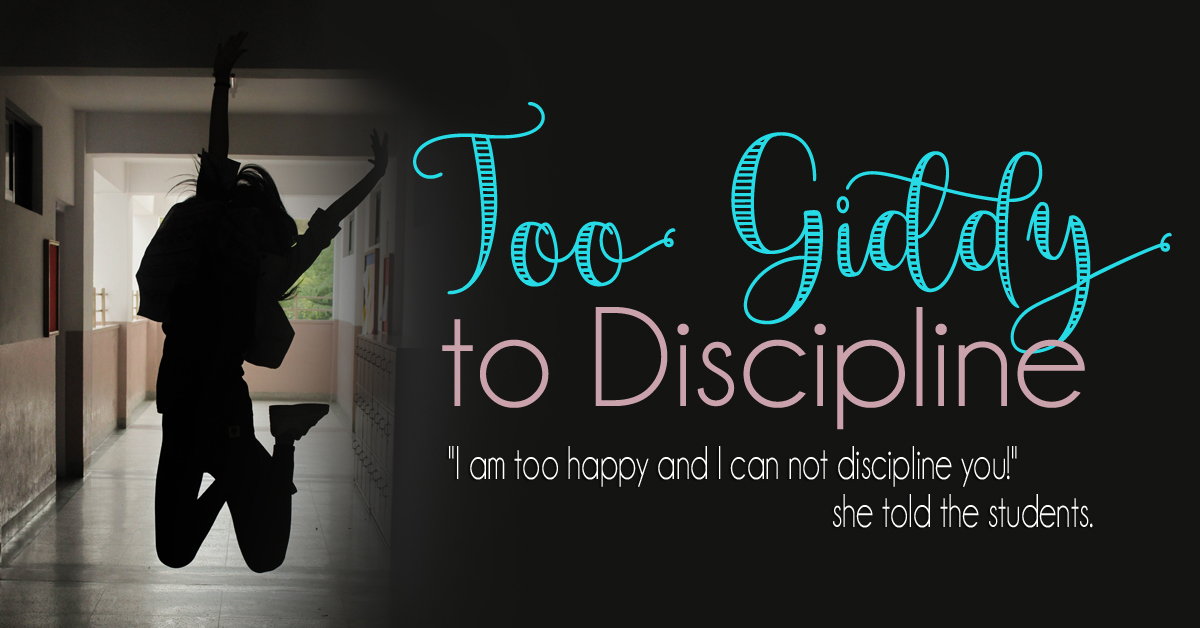 The African sun poured through the window, but it didn’t warm the cold room of bright yellow concrete walls that one might call the teacher’s lounge.

The young professional staff of ITMI’s Excellence Christian Academy, nestled in the heart of Kabwe, Zambia, chatted as they sat on chilly metal chairs and stools, waiting for the meeting to start.

They crowded around the two tables in the middle of the room, partly so they could all be at the table and partly for warmth.

The founder and Principal of ECA, Eugene Kalunga, strained slightly to call the meeting to order. His new, subdued voice, induced by declining health, just couldn’t quite be heard over the din of the gathering co-workers. 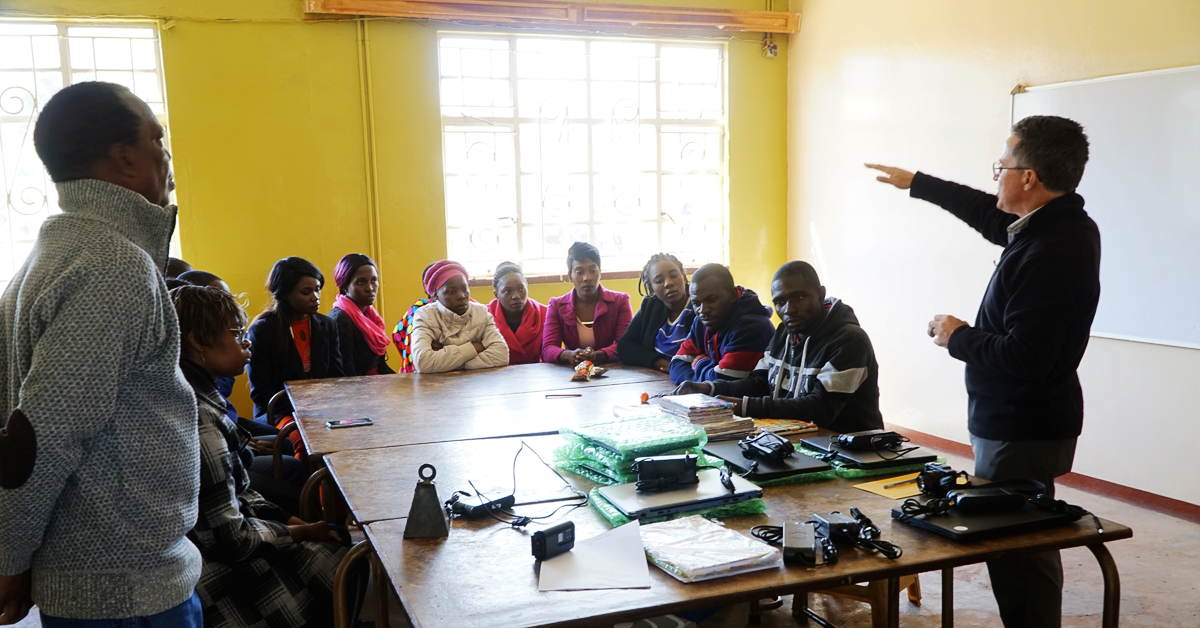 For years, the academy has struggled to retain quality instructors.

What most do not know is that Eugene allows as many as one-third of his students to get a quality education at ECA, though their parents can not afford full tuition. 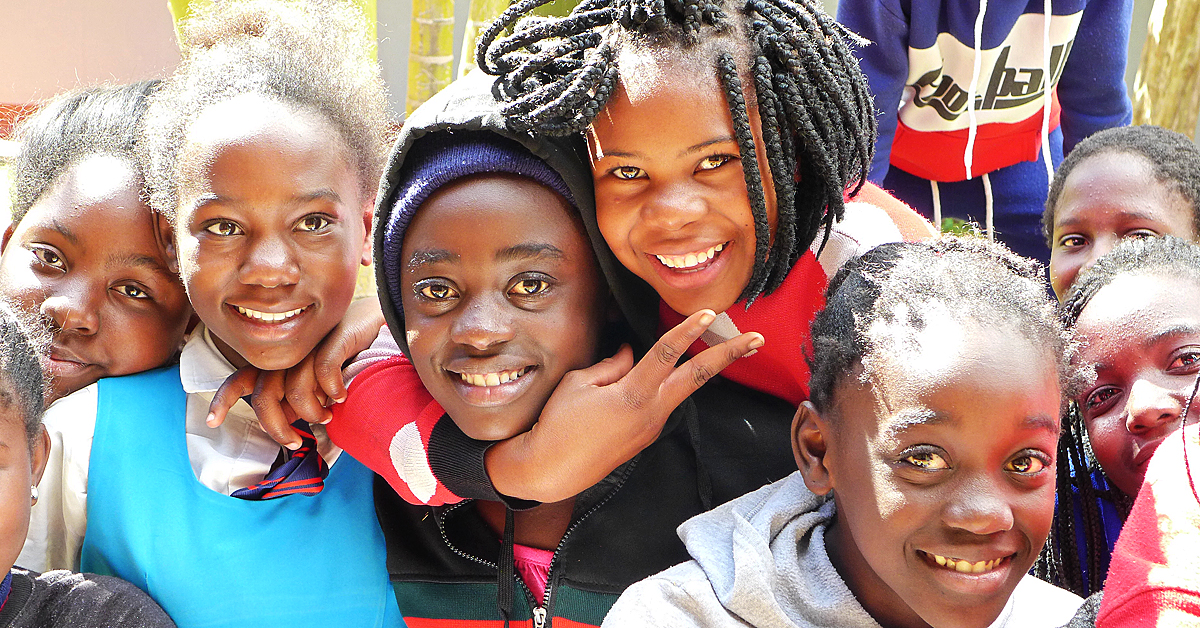 What most do not know is that Eugene allows as many as one-third of his students to get a quality education at ECA, though their parents can not afford full tuition.

Eugene personally, his staff and the school do with out to break the cycle of poverty for these families. God has kept the doors open for 21 years now, but Eugene has the task of carrying that huge burden uphill, day in, day out. 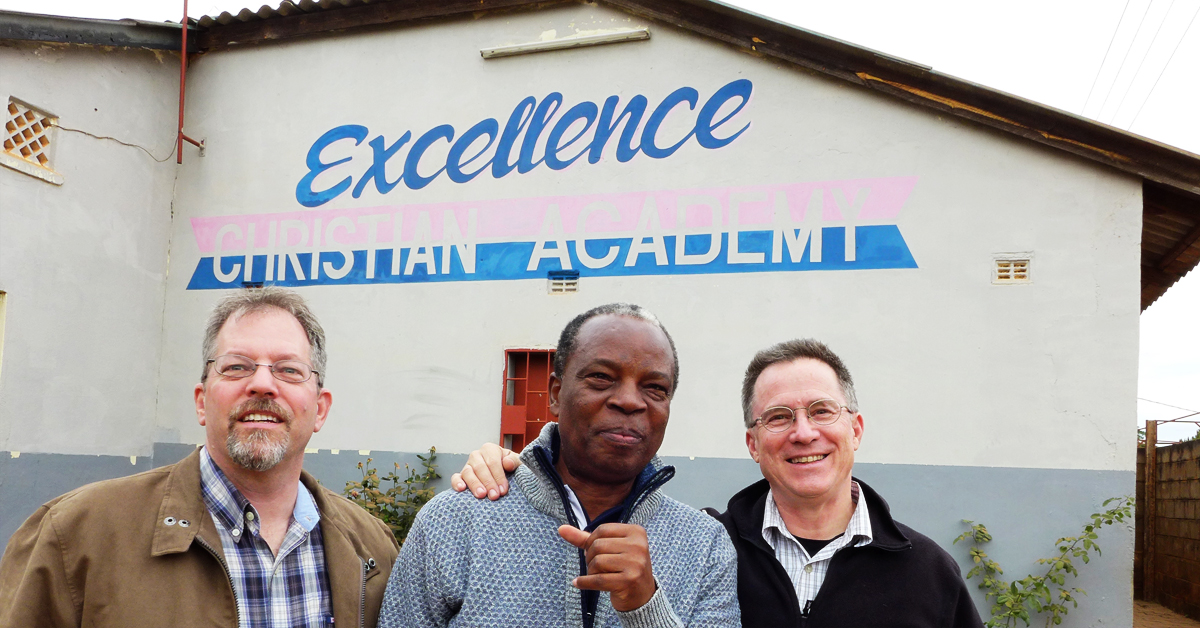 Eugene wanted to bless those staff members who have resisted the lure of earning higher wages in the government school system to pour God's Word into the next generation of children who are blessed to be at ECA.

Earlier this summer, Steve and Eugene hatched a plan to reward those teachers.

ITMI’s Timothy Keller, Kent Reisenauer and Steve Evers visited ECA’s campus during the first week of Steve and Kent’s late summer travels to the ministry sites of our South African and Zambian partners. (2018)

During this visit, they gathered the ECA faculty and gifted those who had served faithfully for years with their very own laptops! 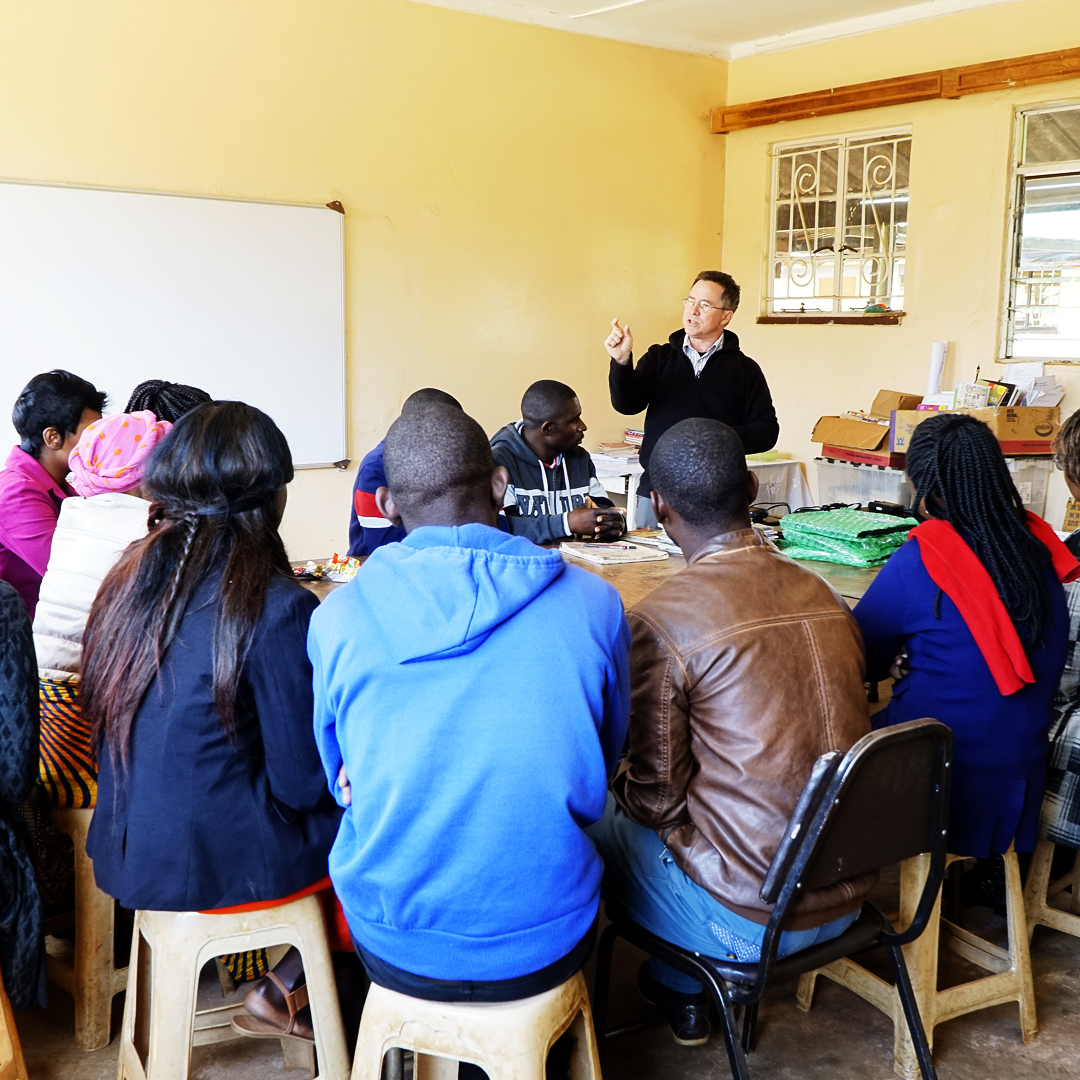 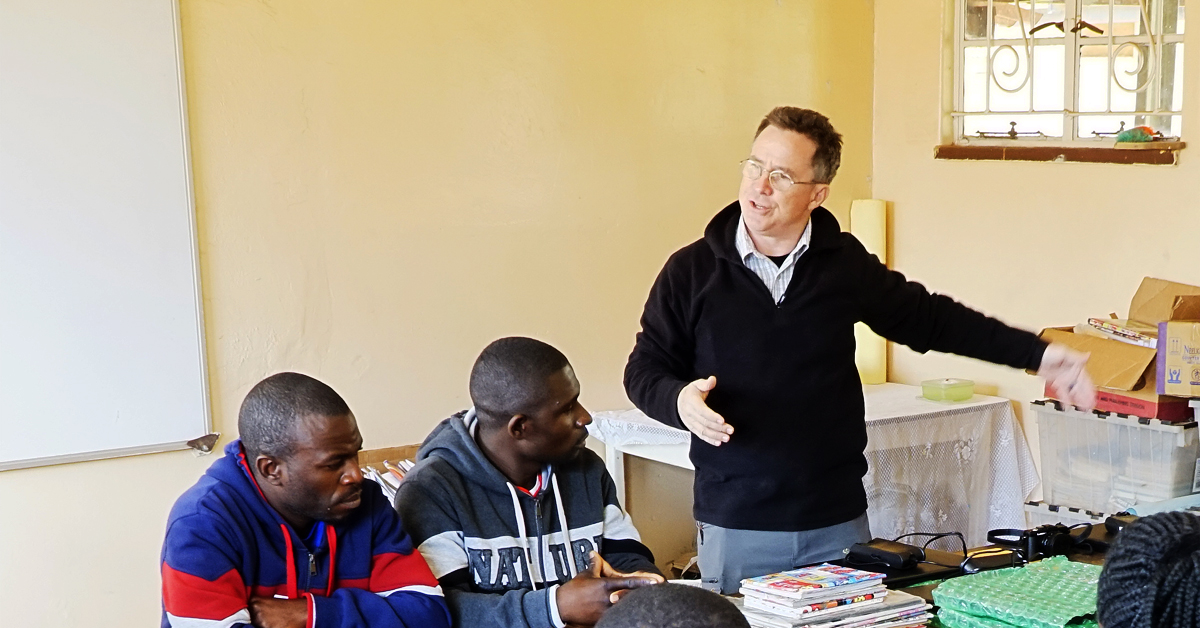 Steve about to present laptops to loyal ECA teachers.

“You should have seen the normally restrained African teachers burst into unrestrained joy and exuberance when they were individually presented their laptop,” Steve recounts.

“They were so, so excited to be given something they’d only dreamt about. They felt valued and appreciated for their long sacrifice of putting the children's Christian education above their own personal income.”

After the ceremony, one highly professional, mid to late 30's faculty member, was in the school office and a handful of students had done something that would now require some correction.

Eugene observed his trained, capable and trusted teacher, trying to discipline this group of children.

He chuckled as he relayed what he’d seen,

"She could not perform her duty because she could not wipe her ear-to-ear smile of joy off her face long enough to get serious enough to discipline."

"... I am too happy (because of my new laptop) and I can not discipline you!!!" she told the students.

Another young educator lamented that he never has enough time and resources to properly create, print and have his lesson plans ready.

"Now I can prepare at home and just bring my laptop to class and teach from it," he said.

He was trying to be a professional, reserved teacher but he, too, spent the rest of the morning on the verge of letting his excitement get the better of him like a child on Christmas morning.

Steve had the opportunity to encourage them in the Lord.

“It was heartwarming to watch a child take his or her Bible to the front of the room, read or quote their personality selected scripture, then tell the class what the verse meant and how we should apply it to our lives,” Steve shares. 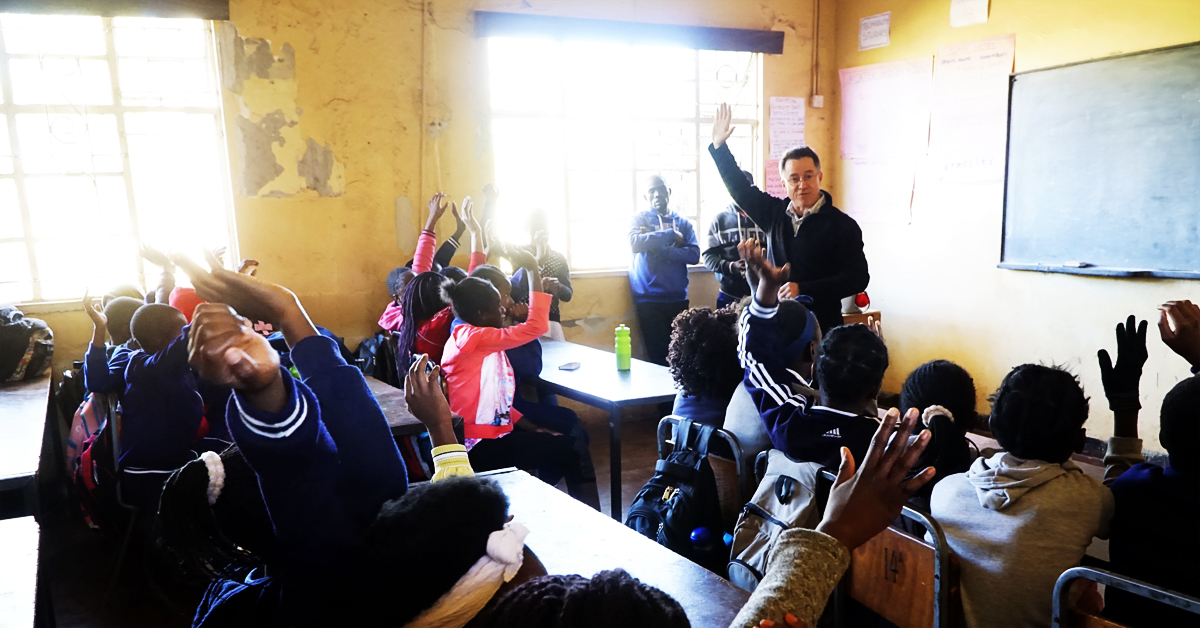 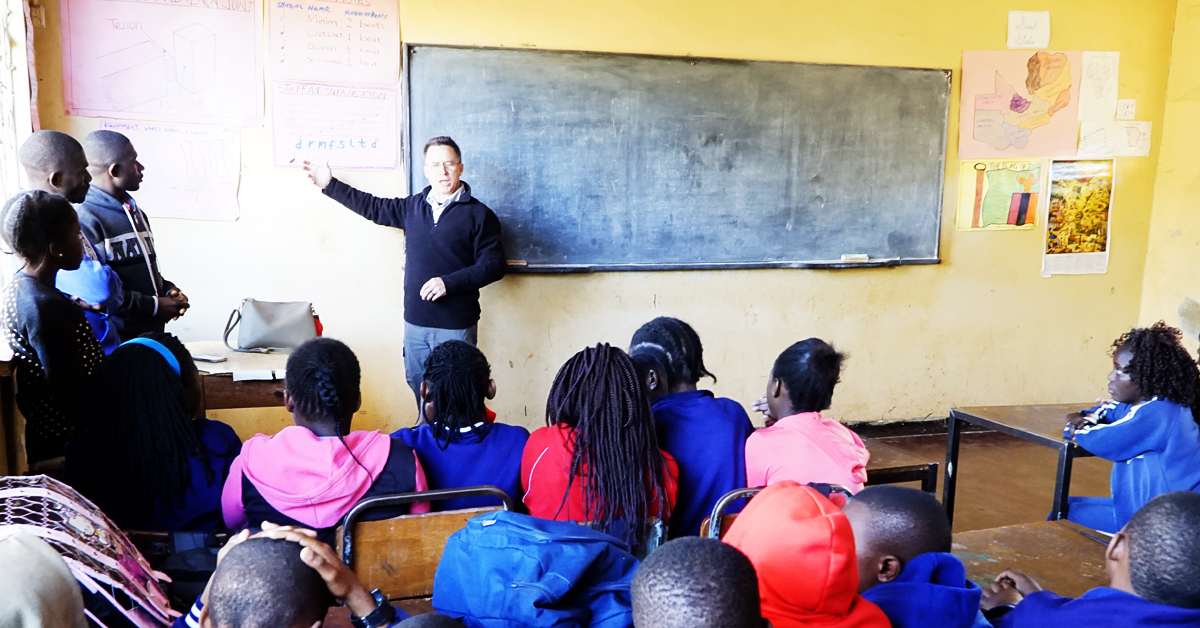 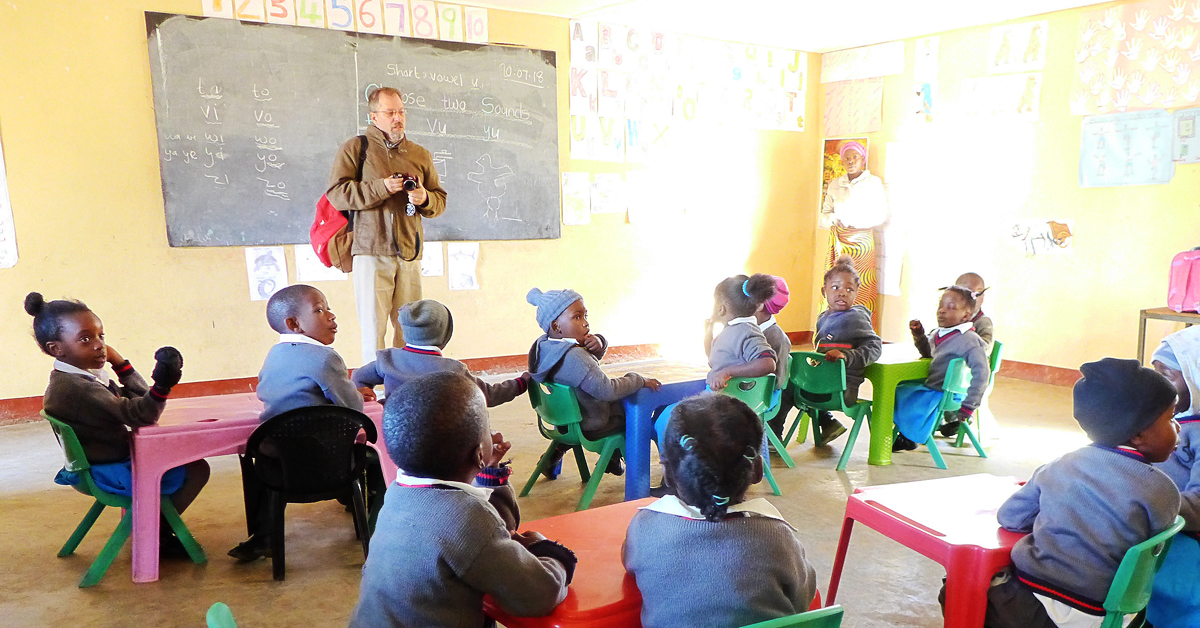 Kent visiting the preschoolers at ECA.

It also equips the ECA pupils to be evangelists in their own homes. Eugene says parents come to know Jesus from their offspring relaying simple truths they’ve learned at school!

You couldn’t be there in that bright room to see the staff members as they were presented with their laptops. But your impact was felt.

Your legacy was left as, through your support, together we equipped teachers to change the course of young lives in Zambia!

In addition to ministering in a Bangalore slum, ITMI's David Kumar travels outside the city to rural villages to equip pastors and believers to talk about Jesus with their friends and family. He returns to each location once a month for six months. ... See MoreSee Less