This article was originally published in the October 2018 edition of ITMI Monthly.

#1 - An Invitation to Prison from a High Ranking Official

It was a November afternoon in Uganda. From inside the walls of Mukono Prison, ITMI’s Muhindo Kawede was in tears.

For two hours, 300 prisoners listened as Kawede and two other teachers shared the salvation message and encouragement with them.

Muhindo doesn’t want to leave these baby believers helpless against the world views of their culture and the philosophies of the inmates around them.

ITMI's Muhindo Kawede with a student of the International School of Missions.

He knows they need to be equipped for Christian living with knowledge of the Bible and its truths, or they will simply go back to their old ways of life.

They will be at risk of unwittingly perpetuating lies, sin and death...possibly in Jesus’ name.

These new believers need to grow in maturity so they can reach other inmates and eventually be Christian leaders among them.

In the past, Kawede has taken an adapted version of his Bible School curriculum outside of the classroom walls to the places that need it the most. The places where hope is scarce and education is minimal.

He calls it “Portable Bible School” and has taught it in several remote villages. Now the Lord has opened the door to teach these life-changing truths to an overlooked population that desperately needs restoration and hope. 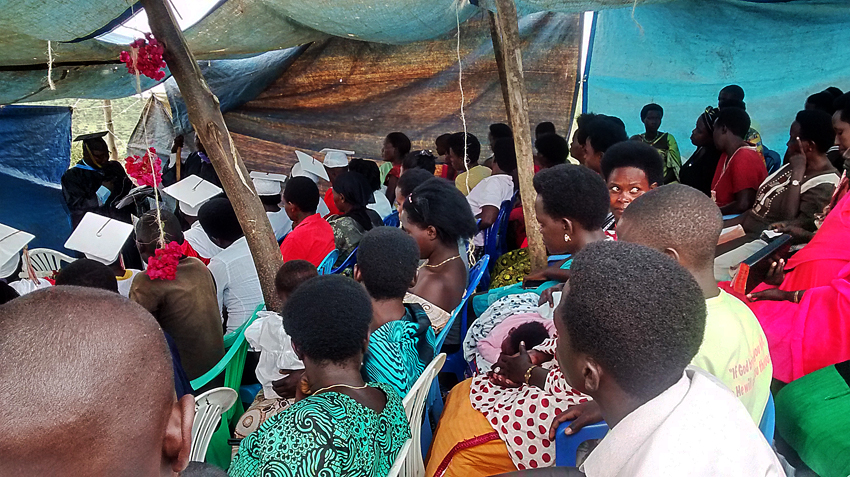 Villagers in a remote area crowd under a tarp for Portable Bible School.

The Prison Commissioner for all of Uganda was quite pleased with the one-day teaching in November, and has invited the International School of Missions to teach 8-week Portable Bible School courses in all of the prisons in Uganda!

What will it take to capitalize on this amazing opportunity?

In short, an investment of $2,230 gives this first group of 50 eager learners the gift of life-changing truth.

This covers transport to the prison, instructor’s pay for 8 weeks, printed materials for the students and supplying the participants with some basic necessities.

You might be wondering why inmates would need basic necessities. Doesn’t the government provide that?

The short answer is, no.

The families of the incarcerated - already suffering the loss of a breadwinner - must find a way to do this.

Kawede shares, “I was moved when I saw the prisoners fighting over bread and soap.” The Commissioner told him many are suffering from malnutrition. The lack of basic necessities for personal hygiene makes female inmates especially vulnerable.

This provision removes persistent distractions that would prevent true learning from taking place.

At the end of the 8 weeks, the students are commissioned as a church, planted right there in the prison! A leader is even chosen, and there is a graduation ceremony.

There are 50 prisoners signed up and ready to start. The Commissioner is eager for the course to begin. The process of changing these lives can start as soon as the funding is provided.

Prison is one of the darkest places to live, like being trapped in a vacuum of hope. We have a wonderful opportunity to help our faithful partner firmly plant hope in Ugandan prisons.

#2 - An Opportunity in Chicago Proliferates!

As the translation of the Bible from its original languages into Polish completed by ITMI partner, Dr. Piotr Zaremba, makes its way into more and more hands, many are experiencing spiritual awakenings and paradigm shifts.

Old, unbiblical misconceptions of God are giving way to an understanding of who the Lord truly is as Poles now have a wonderfully readable Bible they can understand easily.

The translation isn’t just impacting Poland. It’s gaining exposure in Polish communities in the United States and Canada, too.

As a result, Piotr was invited to share Biblical truths from his unique perspective as a translator at a conference in Chicago last month. He spoke and shared with several additional churches and groups as well. 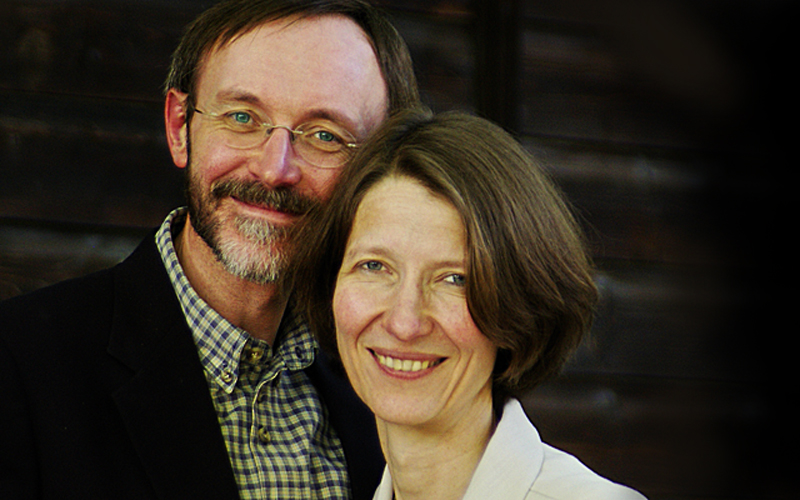 But that’s not all!

Those opportunities yielded more invitations! Piotr has been invited to visit and share Biblical insights in churches in New York and Canada next February.

We believe these are groups truly eager to understand God’s Word, and they recognize Piotr’s 18 years translating the Bible from its original languages has given him a unique perspective to share.

#3 -  Refugees in Kenya Take Action to Forgive After SALT Training.

It was Wednesday, August 28, 2018. ITMI’s South Sudanese partner, Jahim Buli, arrived in Kakuma, a settlement in the Northwest region of Kenya, after a 19-hour drive on a terrifying road.

Seventeen years ago, Jahim, was a refugee living in the refugee camp at the outskirts of Kakuma. Kakuma camp was established in 1992, following the arrival of the “Lost Boys of Sudan.” During that year, large groups of Ethiopian refugees fled their country when their government toppled, and insecurity and civil strife caused many to flee Somalia as well.

In January 2018, Kakuma Camp and the nearby Kalobeyei Integrated Settlement had a population of 185,499 asylum seekers living in the remote area where the desert climate discourages agriculture and far from available jobs or income sources.

While living at this camp years ago, Jahim established a prayer group and youth ministry called Good Shepherd’s Ambassadors Ministry, an interdenominational evangelistic ministry whose goal was to reach youth in the camp with the Word of God and teach them solid Biblical doctrine.

The ministry is still thriving today! Many participants are now Christian leaders in the camp. Others are ordained ministers in South Sudan and even the US.

Though he hadn’t slept during the harrowing and extensive journey, Jahim began training the next day, Thursday.

Jahim equipping pastors and leaders from Kakuma refugee camp with the SALT material.

Before the training, Jahim was praying in his room, and felt led to teach the Social Area of Life part of the Seven Areas of Life Training (SALT).

“I did not know that God was sending me to heal broken relationships and to reconcile people in this camp,” Jahim reflects.

But he followed the Spirit’s leading.

Jahim was expecting to teach 35-40 leaders, but to his surprise, attendance on the first day was 75 leaders from 15 different churches within the camp. On the second day, there were over 120 in attendance. 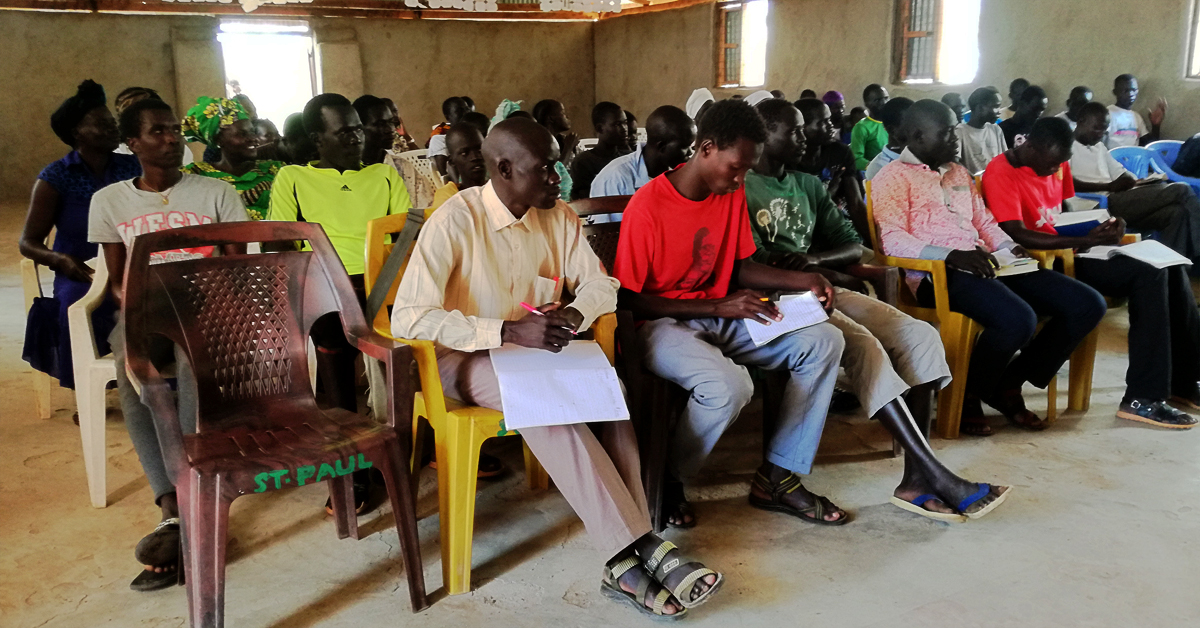 By the second day 120 leaders showed up for Jahim's SALT training.

Jahim taught with courageous boldness, confidence and conviction from the Spirit.

After the first of the two days of teaching, two leaders in one of the local churches told Jahim, “Thank you for...coming such long distance... God has sent you to solve the crisis we are going through.”

They explained that their church had been experiencing strife and disunity between the different tribes in the church. Because of the training, now they knew how the Lord wanted them to handle it.

When Jahim returned to his lodging within the camp, he was shocked at what he found!

“I was so shocked when I saw many people waiting in line to talk to me,” Jahim remembers.

The entire week he was in the camp, Jahim woke early and went to bed after midnight because he was listening to their problems, counseling them and helping them understand the implications of God’s Word on their lives.

On Friday, when Jahim concluded the section on forgiveness, one leader present, Rev. Mark, raised his hand. Rev. Mark confessed publicly that he was an associate pastor who had been harboring bitterness against his senior pastor. Then he called and asked the lead pastor for his forgiveness.

On Sunday, Jahim preached in the church he was part of when he’d lived in that camp 17 years prior.

In that group of believers, there had been a rift between the lead pastor and the youth of the church. The church was about to be ripped in two.

Jahim taught the first lesson from the SALT material entitled, “I Am Not God.”

That afternoon, the senior pastor of that church called for an urgent meeting with the church council and the youth leaders.

He publicly confessed, “I want to apologize to everyone for all I have done. I realized I have been in place of God...I ask you to forgive me for my wrong decisions. Due to my wrong decisions, some of you are about to break away but I request you forgive me and come back. Don’t let my weakness break the church, lets come back together...”

Jahim’s obedience to the Spirit’s leading led to reconciliation and greater glory for the Lord as His people better display the unity that lets “everyone will know that you are my disciples.” (Jn. 13:35)

It also led to freedom that only the Gospel brings that will be perpetuated throughout the camp as the leaders share it with those they shepherd.