This article was originally published in the January 2021 edition of ITMI Monthly.

2021! Many people all over the world have longed for and so wanted those four numbers to come about, as if the numbers carried in themselves some unique and special ability to influence or even make life better. To others, 2021 represents a hope that we have left 2020 and all the uncertainty and fear that those four numbers represent behind.

The apostle Paul reminds us , “…I have learned in whatever state I am, to be content….” (Phil. 4:11) We remember that Paul had some harrowing experiences after he was saved and reconciled in to God’s family.

Paul lived in the first century Middle East, a dirty, dusty, germ infested environment with no sanitizer, no hospital and no Board certified trained medical doctors. Imagine being given the responsibility to speak out against the accepted “world view” and confront that which was untrue and full of death and darkness.

Imagine what the 39 lashes, received 5 times would have felt like. Not to mention being shipwrecked, adrift at sea, facing dangerous rivers, robbers, opposition and betrayal.

Paul’s life after coming to Jesus weren’t circumstances that we would want anything to do with. Yet, Paul, our elder statesman, reminds us in 2 Corinthians 12 that the Lord clearly told him, “…My grace is sufficient for you, for my power is made perfect in weakness.”

Paul’s response was, “…Therefore I will boast all the more gladly of my weaknesses, so that the power of Christ may rest upon me. For the sake of Christ, then, I am content with weaknesses, insults, hardships, persecutions, and calamities.”

For Steve Evers and ITMI, and many of our ITMI nationals, 2020 will go down as an amazing demonstration of God’s power, God’s purpose, and God’s provision. I continue to hear from our nationals that God “really blessed” during the time of fear, hunger, lockdown, virus, uncertainty, over-reaction, under-reaction, and all around worldwide chaos.

The “family” that God has authored and knitted together: you, ITMI and the nationals who work tirelessly and faithfully in their communities and countries has proven to be “…a strand not easily broken.”

God has sovereignly allowed, maybe even led, His people into difficult times so that HE could once again show Himself all capable and faithful to those who call upon the name of the Lord.

Here’s a quick story. Just after a brutal Muslim riot and attack on the local police station that was deliberately set on  fire, our partners, David and Taru Kumar were led to take the love of Christ into this “lion’s den.”

The analogy of a lion’s den is not much of a stretch to most Indians who have to deal daily with some officers that abuse their position to inflict pain and humiliation.

Sammy and Simeon, David and Taru’s adult boys, pleaded with their parents to ignore what Steve Evers suggested and begged them to not go and do ministry to those feared and even hated police. We shared the story of their first visit in October 2020’s In Touch Mission International Monthly.

Just before Christmas, David and Taru believed that God wanted them to go again into this police station and to once again bless those that are widely hated. The Christmas story was a good reason to take a box of locally-made, culturally-honoring cakes and pocket New Testaments into this cauldron of chaos known as the local precinct.

Taru later said that if only one of the precinct personnel were willing to accept the New Testament, she would have been overjoyed.

Sixty-four officers willingly reached out and accepted their very own New Testament! 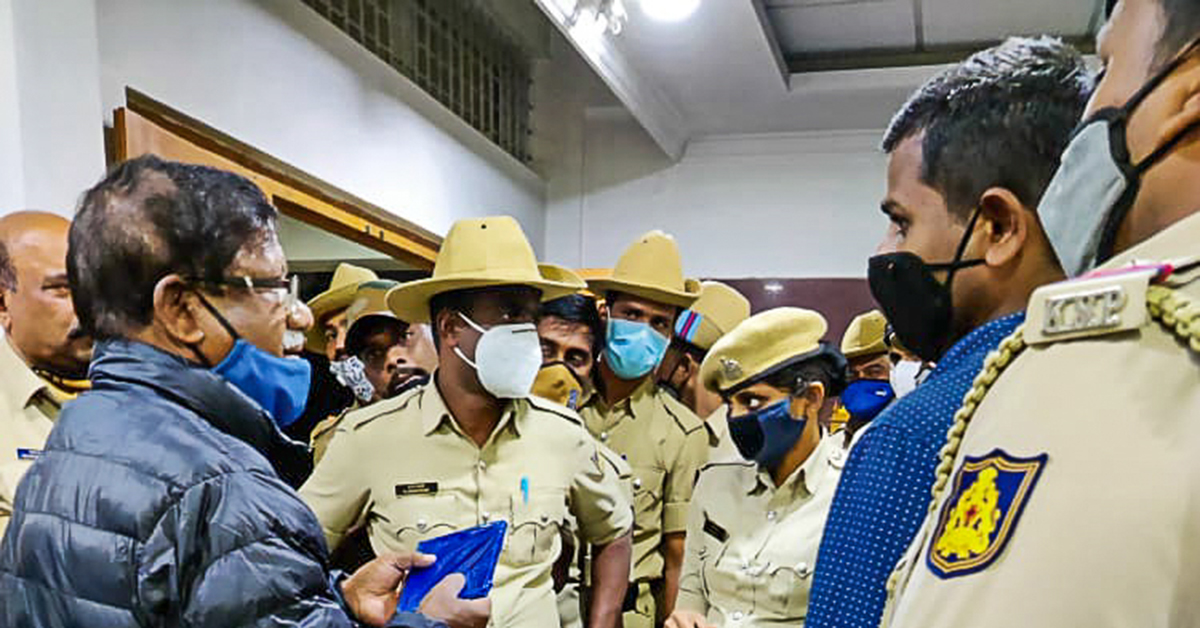 David gives a few of the officers their gifts.

David and Taru shared that their “Christmas” had already come. The gift of seeing those men and women receive that simple pocket-sized Word of God was all they wanted for Christmas. They also said with a smile and a twinkle in their eyes, that they were a bit afraid of what Steve Evers was going to encourage them to do in this upcoming year.

Ready for a new mission? Ready to see God’s hand in new and special ways? Ready to need God even more? Ready to rejoice in His awesome provision? Then let’s strengthen the bonds of unity and do what God has called us to do. Whatever circumstances 2021 brings will be God’s gift to us…His gift to the nations.