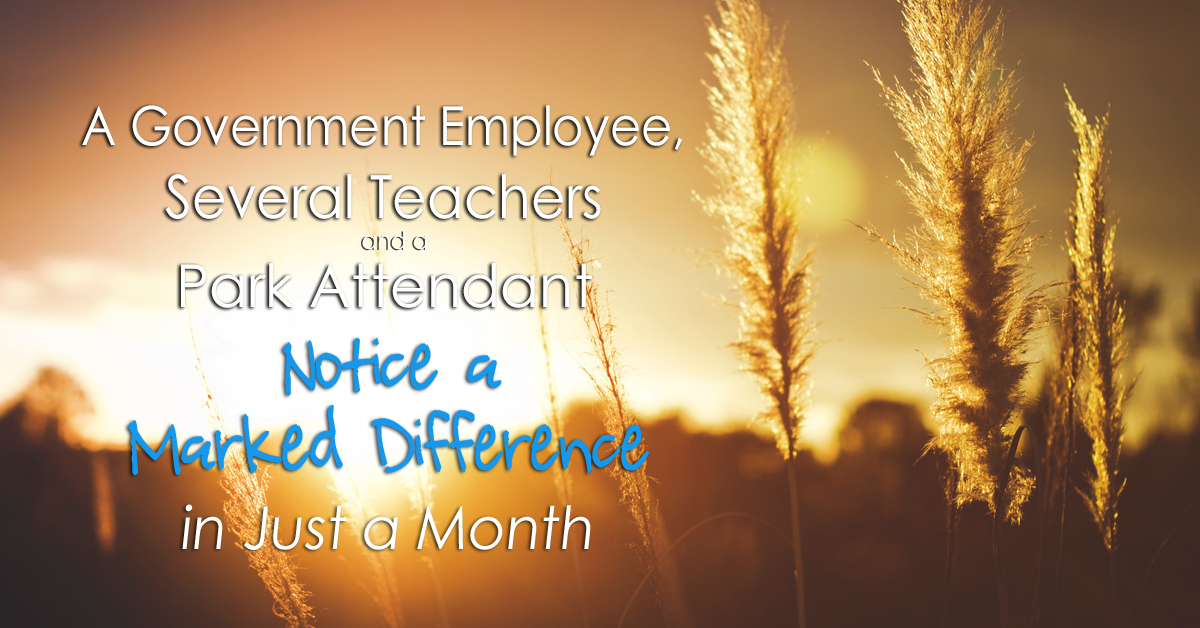 "We all can see Kamil’s better behavior and you also take credit for it," was the incoming text received by ITMI's Jim La Rose.

The text message was from the Director of the group home, or Dom Dziecka, for children in care of the Polish state near Jim's home. Jim has visited the home at least once a week for years now, helping with homework, building relationships and investing in the young, marginalized lives of the residents there.

The dom dziecka Jim has visited at least once a week for years. 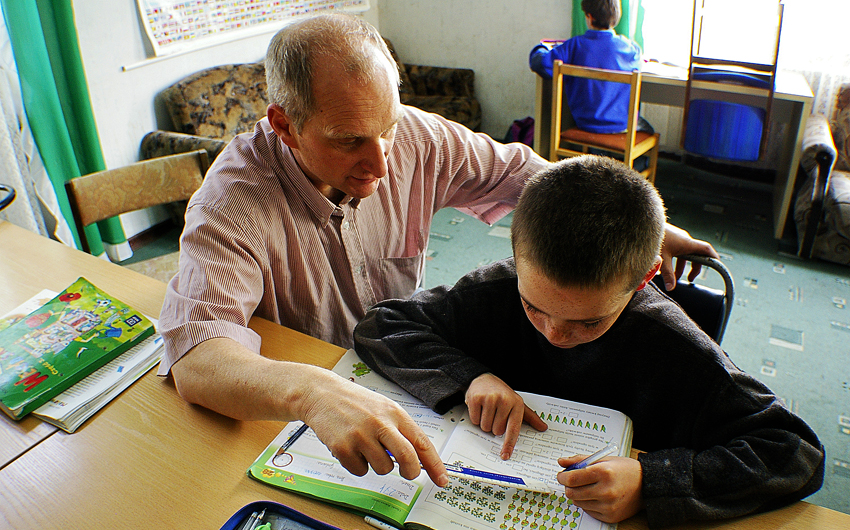 Jim La Rose helps one of the boys with his homework.

Kamil's caretaker at the home volunteered the information that she had met with Kamil’s teachers, and he was doing better in all his classes.
She noted that Kamil’s English teacher had especially noticed a “sudden improvement” in his English language skills. Kamil’s caretaker also commented that Kamil’s behavior at the dom dziecka was noticeably better.
The caretaker attributed these positive changes to him spending time with Jim.
From Jim's perspective, Kamil seems more secure and at peace than he was even just one month ago, when a judge allowed Kamil permission to visit Jim on any day he did not have school.
Jim writes,
Kamil has spent the last three weekends at my place with me.
Kamil was not scheduled to be with me two weekends ago because his mom planned to come see him at the dom dziecka, though she didn’t know if she’d come on Saturday or Sunday.
During our Thursday night phone call (I check in with him by phone 2 or 3 times a week), Kamil asked me to come the next day to spend some time with him (which was an extra visit in that week’s plan).
The next evening (Friday), Kamil’s mom still had not communicated her plans, but while helping me deliver some care packages to the older dom dziecka kids upstairs, Kamil very casually turned to me and said (in Polish),
“If Mom decides to come on Sunday afternoon, I think I’ll just go home with you tonight.”
(We had not talked about this option at all….. this was simply an idea of Kamil’s own making.)
In Kamil’s reasoning, if his mom didn’t come until Sunday afternoon, he could spend most of the weekend at my place, and then we could drive back to the dom dziecka early Sunday afternoon in time for him to still meet with his mom.
To be honest, I was totally pleased that Kamil felt comfortable and confident enough to simply assume that it would be ok with me for him to come spend time with me, even without first discussing it.
And it most certainly was ok with me.
While talking with his mom on the phone later that evening, Kamil suddenly lowered the phone to his chest, looked over at me, and rather joyfully said, “Mom will come on Sunday!”
The understood implication being that he would be going home with me when I left the dom dziecka that night.
As Kamil and I got in my car for the drive back to my place last Friday, I truly sensed that Kamil seemed more natural and “at peace” about himself and his life.
He seemed to feel a new confidence that his place in my life was secure and could be counted on.
The next morning, while at the trampoline park, Jacek, a friend who works there and who spends extra focused time with Kamil, voluntarily commented that Kamil seemed “different.”
Jacek said Kamil seemed much happier and more relaxed than when he had first met Kamil. (This was an unsolicited comment that was not part of the topic being discussed at that time.)
In my heart, I’d like to believe Kamil is truly feeling “at home” when with me, which, because he has no adult who is uniquely committed to him, is a security that is missing in his life at the dom dziecka.
I do try to purposefully include shared experiences that would contribute to this end when Kamil is with me.
For example, this past weekend, Kamil and I:
To be honest, I’m usually pretty worn out by the end of our weekends together, but the positive is that Kamil never wants to go back to the dom dziecka any earlier than necessary.
Kamil also now refers to my place as “our home” (his and mine together), which hopefully means he feels like he belongs there rather than just being a weekend guest.
But that's not all!
Jim's investment in Kamil seems to be garnering interest from others, opening the door for Jim to build additional relationships!
Jim reports,
While Kamil was zipping around the track honing his driving skills during our first visit to the go-karts, Dawid (the go-cart attendant) and I struck up a conversation.
Early in the conversation, Dawid asked about my reason for being in Poland and about my connection with Kamil. This opened the door….. I was gently direct, but not preachy, in answering his questions.
I could see that the contrast between “having a living relationship with the Lord” as compared to the “expectation to live by religious rules” was both new and intriguing to him.
On our second visit, Dawid and I continued our conversation, and on the third visit, Dawid gave Kamil a free balaclava (kind of like a thin cloth ski facemask to wear under his driving helmet), and he also started giving Kamil extra time on the track.
On this visit, Dawid even started telling us his work schedule, ensuring that we could return when he was there to continue blessing Kamil with extra driving time.

Dawid getting Kamil ready for his go-cart ride.
After Dawid’s first gesture of kindness to Kamil, I told Kamil that we should do something to thank Dawid. We decided that Kamil should write a “thank you” note, accompanied by a small gift - a couple pieces of Kamil's favorite candy.
Dawid was both surprised and touched by Kamil’s thank you, and I was able to snap an impromptu picture just after Kamil gave the note and candy to Dawid.
Dawid continued to bless Kamil with additional time on the track each time we came, and on each visit, Dawid and I continued getting to know each other.
Due to the Kamil's legal status, it was awhile before Jim and Kamil could return to the go-cart track. Here is what Jim had to say about the next visit.
Dawid seemed pleased to see us. Almost as if being “old friends,” Dawid and I began visiting with each other again. Dawid began telling me how much he liked Kamil, largely because Kamil was so nice and polite to him.
Dawid said many people, and especially (rich) kids, are actually unkind and demeaning in their attitudes and treatment towards him, but Kamil stood out as being different from these other people.
Dawid told me he had shared Kamil’s candy with his (Dawid’s) girlfriend, but Kamil’s thank you note was special to him and that he (Dawid) had decided to keep it….. in fact, he still had with him.
Jacek, the trampoline park employee who has also taken an interest in Kamil, has even expressed an interest in visiting the dom dziecka with Jim!
Jim's investment in Kamil has given others the opportunity to bless him, too! And they have been blessed in return. Jim's final thoughts were,
Kamil also seems to be experiencing some of the wonderfully positive, practical elements that are naturally embedded in a personal relationship with a living, loving, caring Heavenly Father.
Please keep praying for Kamil as the Lord brings him to your minds and hearts. Please also pray that the Lord uses me in ways that move Kamil closer in relationship to our Heavenly Father through faith in Jesus Christ.
There are several opportunities to be part of this wonderfully impactful ministry.
One of them is providing some extra support for Jim for one year, while he steps away from his supplemental income source. Jim wants to take a year to enhance his ministry by gaining a better handle on the Polish language.
Thank you for your investment in Kamil and so many others in Poland through your support of Jim! He - and we - could not do all that we do, reach those that we reach and accomplish what has been accomplished without you!
GIVE NOW
PARTNER WITH JIM LA ROSE