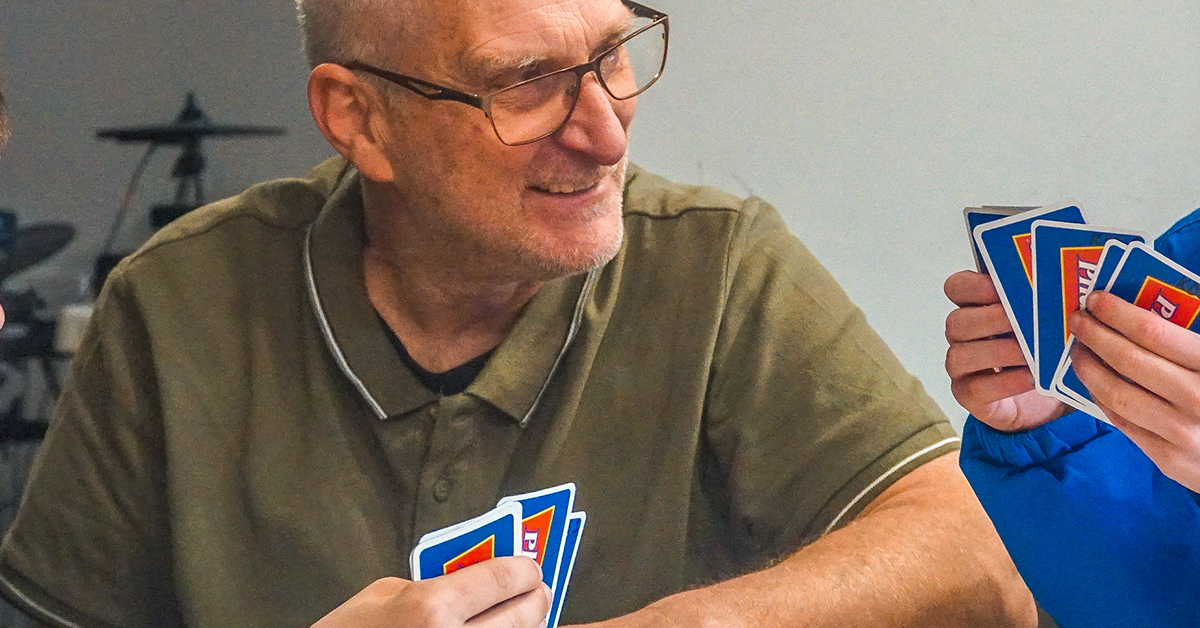 This article was originally published in the May 2022 edition of ITMI Monthly.

It was 4am. ITMI's Steve Evers couldn't sleep.

It was 4am. ITMI’s Steve Evers couldn’t sleep. In a couple of hours, he would begin a 12-13 hour day of ministry in Poland, but he knew he wasn’t going to fall asleep.

Moments from the past two days wouldn’t quit haunting him. He’d arrived in Poland Sunday afternoon and been informed of an incident that happened at some point during the Sunday morning services held by K5N Church (pastored by ITMI’s Piotr Zaremba).

One of the group of orphans from Ukraine that was staying with one of the K5N families, an 8 or 9-year-old boy, had emotionally snapped and lost control of himself. The blonde youngster had kicked and head-butted two of the men of the church, leaving them bloody and bruised.

Since arriving in Poland, it was discovered that one of the Ukrainian caretakers who had brought the children to Poland and was staying with them had been abusing the children.

That caretaker has been arrested, and Marina compassionately explained to the children that she, too, needs Jesus just like the rest of us.

The following day, when Steve was visiting Marina and Lukasz’s home, ITMI’s Jim La Rose was teaching the children an English lesson. The same broken boy had snapped again and this time was attempting to choke himself.

This broken boy's inability to control the hurt, pain and terror leaking out of him caused the other children to display faces filled with fear that they, too, would soon be unable to suppress their feelings. Jim knew the lesson was over for now - they couldn’t keep processing what he was teaching them.

A team of crisis psychiatric professionals were summoned. When they arrived, the largest man on the team was elected to restrain the boy and carry him to an ambulance. All the while, the boy fought and struggled to be left alone to harm himself.

Marina gathered the other children in an effort to refocus them back to the only One that can calm their fears and anxiety. She led them in a Monday afternoon time of praise and worship. Then looking into each child’s eyes one at a time, she spoke with gentle passion into the life of every child, encouraging them and reminding them that they are loved by Jesus and that He is in control.

“After the praise and worship, God allowed me to stand silently and just hug a few of the tear-stained children. I think God knew I needed it probably more than these precious children needed it,” Steve reflected in an email to his men’s Bible study group.

When they got to the hospital, the boy was not able to be admitted immediately for whatever reason. The official, who was with him asked, “Would you like to have lunch at McDonald’s? Have you ever eaten there?”

The boy responded that he had been to McDonald’s but had not eaten there. He explained that every time the caretakers took the children there as a treat, he was denied a meal as a punishment for poor behavior, and instead, given one french fry.

Later in the week, Steve and the team spent another day with the children, helping Jim with an English lesson and then taking all of the children for a special treat - lunch at McDonald’s.

“The kids were THRILLED,” Steve reported.

Jim organized the whole process impeccably and made the process of ordering for 23 people at McDonald’s go smoothly and everyone was enjoying their food in record time. 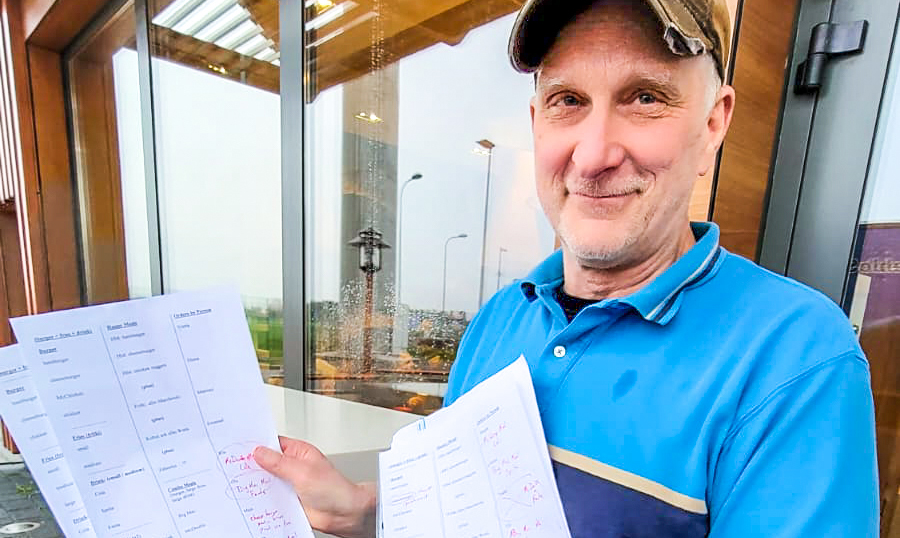 ITMI's Jim La Rose organized ordering for 23 people, and they were eating in record time!

This story paints a stark picture of the reality that is unfolding in Eastern Europe. The refugees that are pouring into our partners’ countries have intense physical needs, but many are living with trauma that can’t go unaddressed.

It also reveals the level of sacrifice that is being asked of our Polish brothers and sisters as they seek to honor Jesus by welcoming refugees into their homes, abandoning comfort and privacy so that they can pour out their lives and resources on behalf of strangers.

When we think of all of the possibilities for where these orphans could have ended up after fleeing their country, it is clear the Lord intentionally led them to Piotr, Marina and Lukasz, and K5N church.

Though this assignment is no picnic, Piotr has discipled and prepared his people for this role.

Steve is joined in Poland by ITMI Zambian partner, Johan Leach, and  ITMI Board member, Jon Dekkers, and his son and grandson, Jonny and Van. 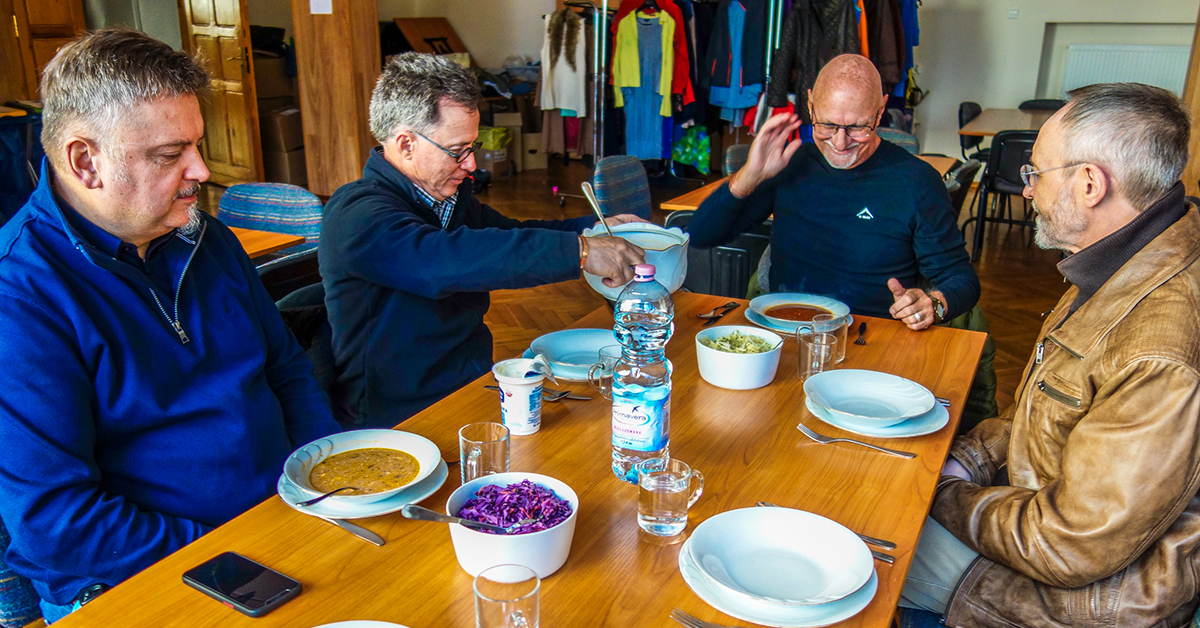 Steve, Lezek and Johan praying together.

In early March, ITMI supporters helped Piotr Zaremba’s church with funds to provide protective vests and helmets to those in Ukraine who were in harm’s way. Piotr and others searched thoroughly, but could not find any to purchase, so they had vests made in Poznan.

Steve writes, “We’ve already gotten a text back saying, ‘...thank you for the vest...a life was saved!’ ” 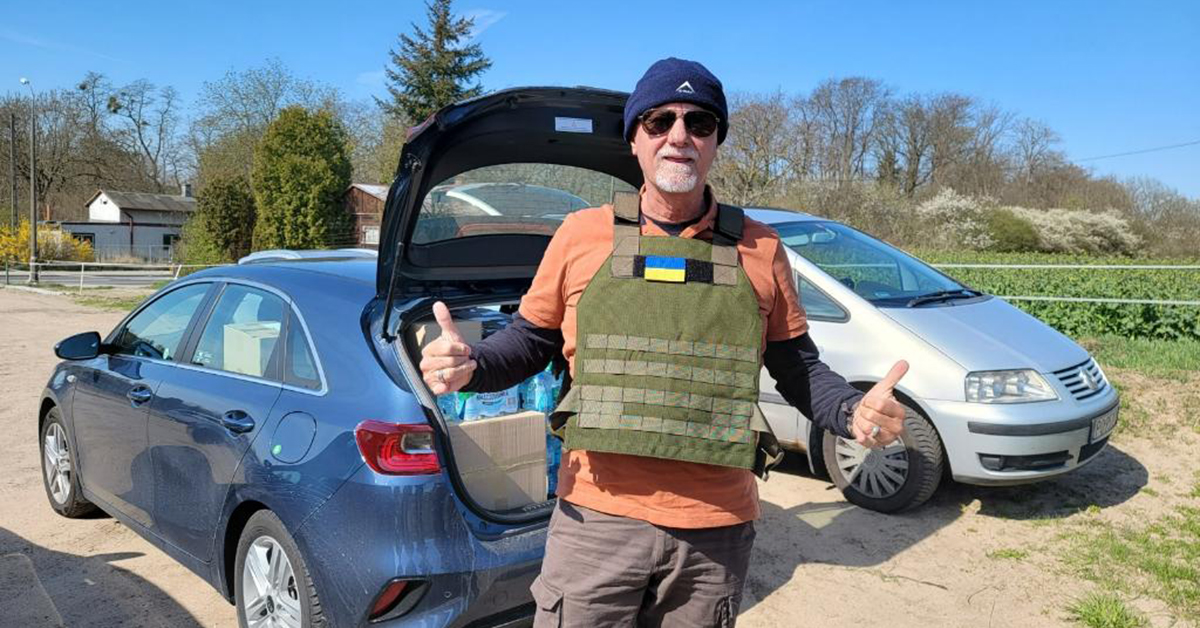 Johan Leach wearing one of the protective vests.

A Gospel of John and a New Testament will be put with each vest going forward, so they’ll know the protection they are receiving came from the Lord.

The vests are going to those putting their lives on the line to protect and serve in Ukraine. For example, local militia groups made up of fathers and grandfathers attempting to protect their families and other vulnerable citizens against Russian soldiers. 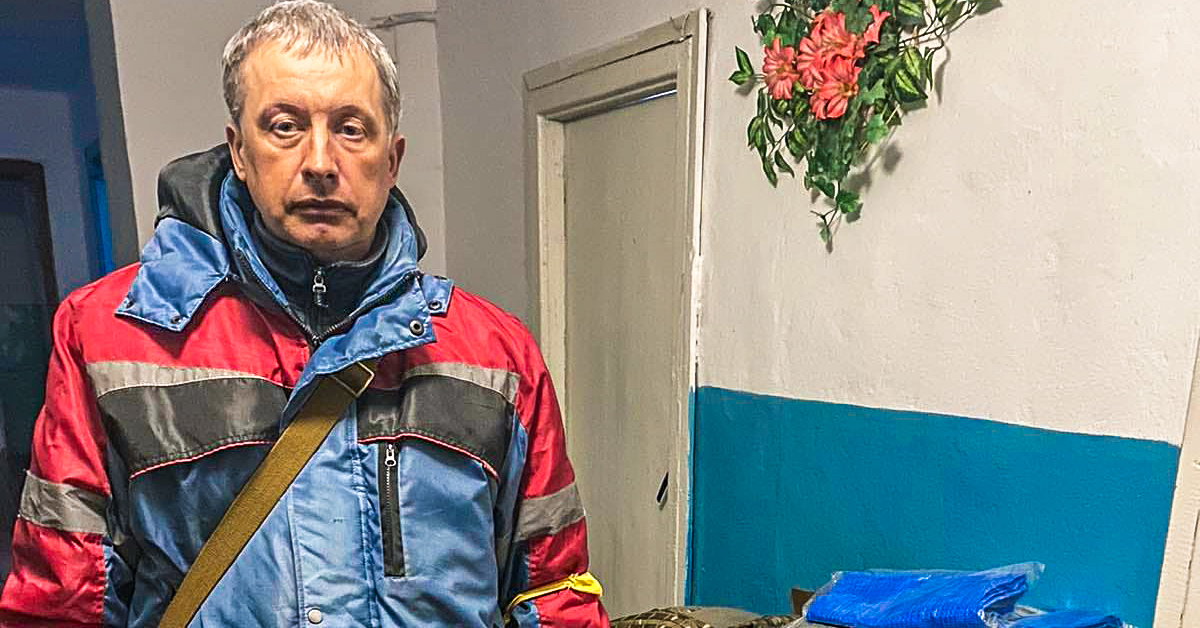 The vests are going to local militia. Ukrainian fathers and grandfathers attempting to protect their families.

Steve and Johan made a midnight run to a small city in Poland to pick up boxes of food and medical supplies that would be taken to Ukraine. A whole church of about 50 people volunteer to build and pack these boxes.

As the supplies were being loaded under dim yellow streetlights, the pastor of the church tried to give Steve and Johan the equivilent of $50 USD for fuel. Instead, Steve gave them some money from First Baptist Church of Tempe and others who donated funds that could be used to meet needs and build God’s Kingdom as Steve came acrosss them during his travels.

“They tried not to take it,” Steve wrote, “but I insisted that they use it to build more food and medical supplies boxes.”

Steve continues, “You can't know how tight and heartfelt this pastor's embrace was...wow!” 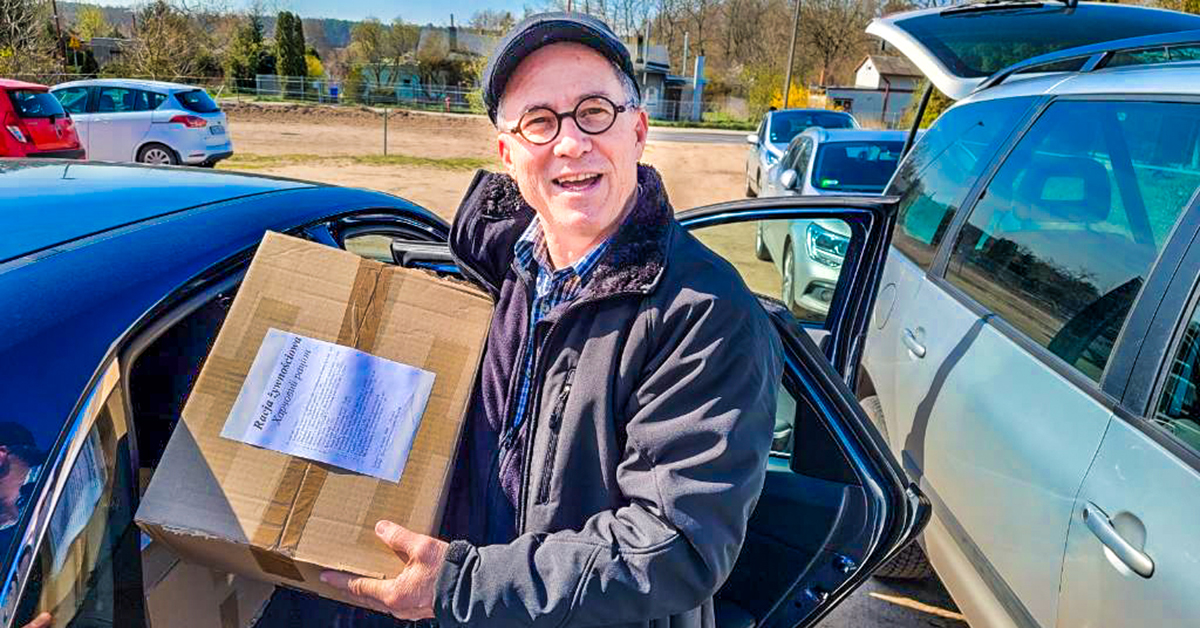 Steve holding a box of food rations from his midnight run.

Thanks to all of you who got involved in supporting our partners in Europe. Hurting refugees are being cared for and the light of Jesus is shining brightly during this dark hour.