Please remember this man, his face, and his story---for he is no longer here to share it on earth, but his life is worth remembering!

His name is Piotr and he will be remembered as one of the New Life Center's most difficult participants. He was tough. Tough to work with. Tough to love. And tough to change...

Until God rocked his world and changed his heart.

After he successfully completed the NLC program, he returned to his hometown in Poland. It was nearly impossible for him to find work---but he didn't let that get him down nor did he resume his old ways.

The New Life Center is a transitional home for men in Poland.

Instead he found a local church and began working tirelessly with them to help rescue the forgotten.

Over the last 5 years, he never found "work" and yet God sustained him by providing accommodations, food, and he became a part of a team that helped plant 5 churches throughout Poland.

He just found out he had cancer...and that's when reality hit him. His life may be short. And so his pastor asked him "What do you want to do more than anything else in the world?"

And he said, "Go back to the New Life Center and share with the men that God can change their lives! They just need to put their hope and trust in Him."

He got that opportunity, returning to the NLC and sharing with the participants there his life's story. Less than two weeks after this picture (above) was taken at the NLC, he passed away.

Piotr in the Bible was once timid and became strong. This Piotr was once in trouble and became great. Both church planters on fire for Jesus Christ!

And now both together in heaven celebrating the Man that changed their lives.

Mourn with us. Rejoice with us. Walk with us.

We work with the forgotten---but when they are found---MAN! There is great rejoicing in heaven and earth. 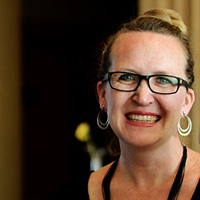 ITMI Partner, Brooke Nungesser is a passionate wife and momma living off of Christ and coffee…in a foreign country. She and her husband, Richard live and minister in Poland with their three children, where they founded and operate Bread of Life to rescue the forgotten. They also shepherd Poznan International Church, an English-speaking church for Internationals in Poznan.

Brooke blogs about her life overseas at And Two Makes Crazy. You can also stay entertained and updated on the Nungessers' life and ministry by connecting with Brooke on Facebook.

ITMI's Lazarus Yezinai tells the story of how Dorca, a widow in South Sudan has provided for her mother-in-law and three children since 1998 without income. ITMI gave Lazarus $50 to help someone in need. He gave it to Dorca. Most South Sudanese would have fed their family and been hungry again. Not Dorca. Find out what she did with the gift and the kind of impact Lazarus' supporters are having in a country filled with needs and pain. ... See MoreSee Less