This article was originally published in the August 2019 edition of ITMI Monthly.

“What’s beautiful about the stories of those experiencing healing and saving knowledge of Jesus through our partners’ ministries in South Sudan, is that they aren’t acting like victims.”

Dorca is a widow in Juba, South Sudan. She and her handful of children live like most of the just under half a million residents of the capital city.

Their home is an ungraded plot of reddish brown clay-dirt with a makeshift fence of thin wooden posts or corrugated sheet metal to keep the threats that accompany a desperate, traumatized population at bay.

Inside the posts of their compound’s boundary, families typically have several small mud structures, each for a specific function - comparable to the rooms in an American home.

One structure is one or two bedrooms where the entire family sleeps. These structures require continuous maintenance because the mud walls will melt away in the rain if the household doesn’t have the resources to cement them over.

If they are able to build it, they might have a structure for preparing food and one that functions as a bathroom. If not, they’ll prepare meals with a hand-made clay oven about the size of a footstool huddled on the ground, directly underneath the intense rays of the African sun and ask their neighbors for use of their personal waste facilities or walk into the bush.

There were no others stepping up to feed Dorca’s children.

The pressure and responsibility had been unceremoniously dumped on her shoulders. It was up to her - and the Lord. It wasn’t like she could just go get a job.

After decades of political unrest and tribal warfare eliminating basic infrastructure and crippling any industry, there are some jobs to be had in the city, but in the midst of being displaced and surviving, few are educated and the competition is stiff. Even fewer can afford transportation to take them there.

How would she keep these children entrusted to her alive?

Jacquelyn and her two brothers, like so many children in war-ravaged South Sudan, were on their own at a young age.

She quit primary school to keep the three of them alive. As a young woman, she married and had some children, but consistent with the stories of so many women in South Sudan, her husband, whose development was likely truncated by repeated trauma during boyhood, left her and the children to fend for themselves.

She was alone in volatile Juba, uneducated and unskilled, needing to provide protection for her family. And food. Every day. What could she do? How would she prevent starvation or other trauma from befalling them?

We often view the South Sudanese as victims. Their lives ravaged by tribal warfare. They and their loved ones, suffering from highly traumatic and life-altering incidents.

Perpetually and relentlessly accosted by physical and emotional misery all around them. And they have been victims. They’ve been hurt by others who have been wounded themselves and are now walking hurricanes of pain that destroy the lives of anyone they encounter.

Injured emotionally, spiritually or physically by others seeking to heal their own agony through revenge and protect their own hurting hearts by gaining control over others.

But what’s beautiful about the stories of those experiencing healing and saving knowledge of Jesus through our partners’ ministry in South Sudan, is that they aren’t acting like victims.

Instead, they are heroically and courageously moving forward in faith, doing what they are able to do rather than bemoaning what they can’t.

Jacquelyn is now a member of Vicky and Lazarus’ church, Revival and Fire Ministries.

It’s still not easy living and being responsible for others in Juba, but with the spiritual strength Jacquelyn has gained from the ministry of our partners in South Sudan, she is accomplishing it with valor.

She’s putting her brothers through school, she’s providing for her children, she tithes regularly, and she’s a faithful member of the church.

Jacquelyn is thriving as a member of Revival and Fire Ministries.

For a few years, Dorca fed her children without an income through the Lord’s provision.

They joined Lazarus and Vicky’s church, a new kind of church in their city, planted by a group of people who purposefully divided up the “power” of leadership so none of them would be individually tempted to find their identity in the title of “pastor” or to enjoy the mis-placed worship of their flock.

Then, a couple years ago, ITMI supporters provided our partner, Lazarus Yezinai with $50 to help someone in need. Lazarus gave that $50 to Dorca to help her feed her family.

Most would have bought food for a couple days, only to be hungry again. Not Dorca. She bought several $5 plastic chairs, which she rents to people who sell their goods by the roadside, providing a meager but steady income. 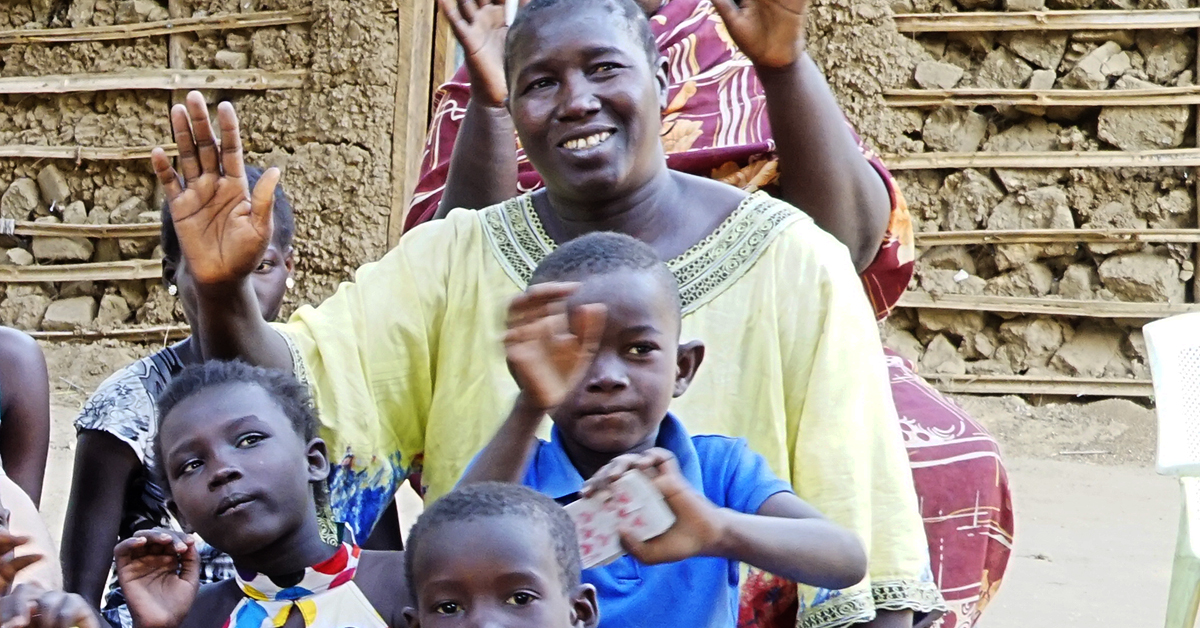 Dorca with some of her children, now provided for through a one time $50 gift!

Now Dorca is one of a group of adults attending an after-hours school Lazarus and his church started for the many adults in their midst who couldn’t finish their schooling. Maybe they were displaced by tribal warfare, maybe a family member was hurt or killed and survival demanded they get work, or maybe the funds for school fees just weren’t there.

Many of the adults simply want to be able to read the Bible, but a basic education will help them take care of their families and have an income to tithe on.

Learning to read equips them to disciple the next generation, teach Sunday school or outreach programs, read the Bible aloud to the children in their care. Reading the Bible and being educated greatly reduces their chances of being led astray. 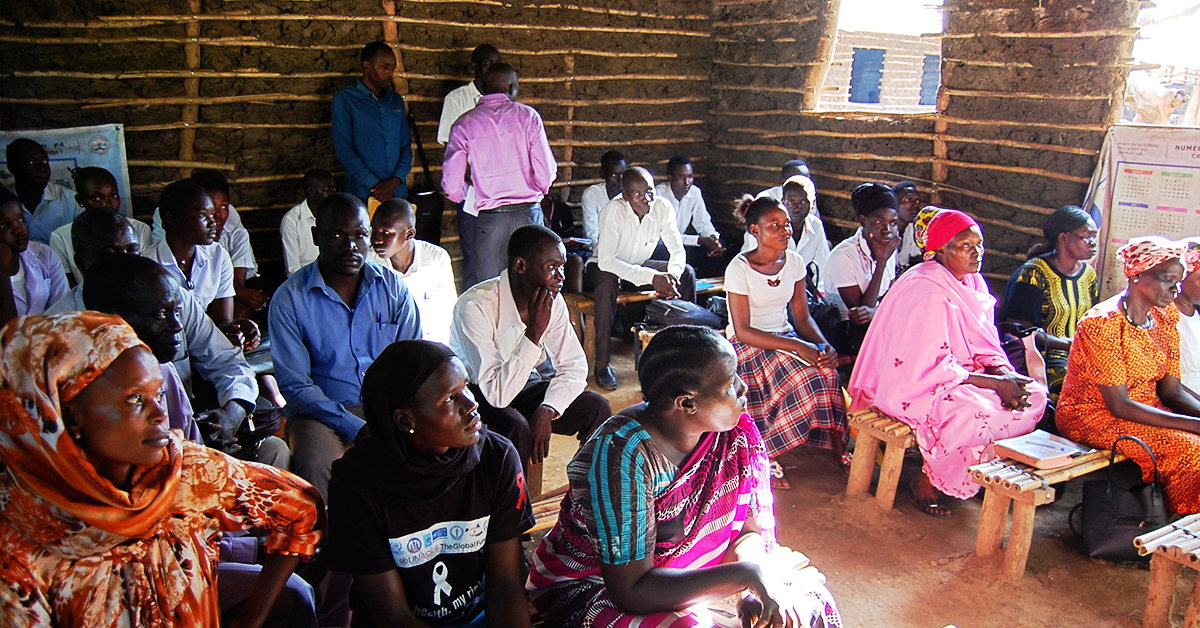 The volunteer teachers leaned against the mud of the back wall and the learners sat on low, backless benches made of tree branches as both Americans shared with them and encouraged them via a translator.

While in South Sudan, Steve Evers and Kent Reisenauer had the opportunity to visit the one room mud structure where about 30 adult students were gathered for class.

The volunteer teachers leaned against the mud of the back wall and the learners sat on low, backless benches made of tree branches as both Americans shared with them and encouraged them via a translator.

The entire room sparkled in excited anticipation with the idea of having their own copies of the Bible.

And this illustrates a very interesting phenomenon that we see over and over again in South Sudan.

Though many struggle with survival in this volatile place, what they seem to hunger for most is hope and truth from God’s Word. Crowd after crowd hungrily consumes any Biblical teaching our partners are able to offer, lick their spiritual lips, and implore our partners for more.

So Vicky, Lazarus and their church are doing everything they can to be faithful to give it. Undeterred by their lack of resources to relieve their physical hardships, they offers something they know is better: Jesus.

ITMI's Vicky Waraka meets daily with various groups and visits homes providing prayer and gospel counseling. In the last few years, Vicky has seen people healed from trauma and pain by the Lord and ready to move on with life.

But she saw that their lack of regular income would make them vulnerable to future trauma. So Vicky began to build on the solid spiritual foundation she had helped them construct by training them in Biblical principles for business and finance.

Then we helped some willing believers who were looking to make a difference, partner with Vicky so that together, they could change lives.

These donors helped Vicky give micro-business loans - a small portion of “seed money” allowing them to purchase initial supplies to grow or craft and sell goods - to people who had gone through the training. Vicky gathered them in groups called “Hope Groups” that meet regularly, to help each other and hold each other accountable. 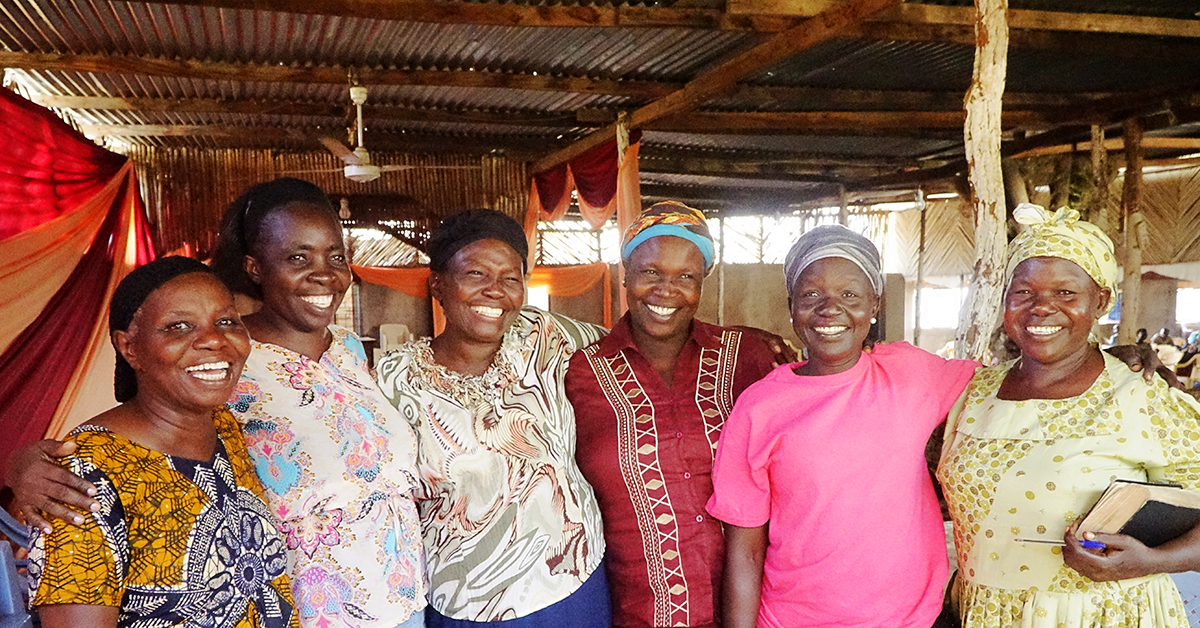 Vicky (far left) with some of the women of her Hope Groups who are providing for their families, tithing to support the Lord's work and thriving in a tough economy!

Lazarus accepts invitations to teach and equip people with Biblical truth from all over South Sudan, he makes regular trips to the homes of the widowed, elderly and those in great need, bringing spiritual and sometimes physical provision.

These stories of hope and courage are only a small sampling of the legacy left by those partnering with our partners in South Sudan. If you’re standing with Vicky or Lazarus  - or have stood with our South Sudanese partners in the past - these stories are the continuation of your story.

The story of your own obedience, sacrifice and faithfulness that has been placed in the Lord’s hands and is now yielding bountiful fruit.

If you’re tired of the headlines of disasters and suffering, and ready to be part of cost-effective solutions and leave a legacy you can be proud of, partnering with a South Sudanese partner could offer you the unique opportunity you’ve been searching for.

Our partners can do a whole lot for one family with even a small gift, but the more we supply them with, the more suffering families can receive hope.