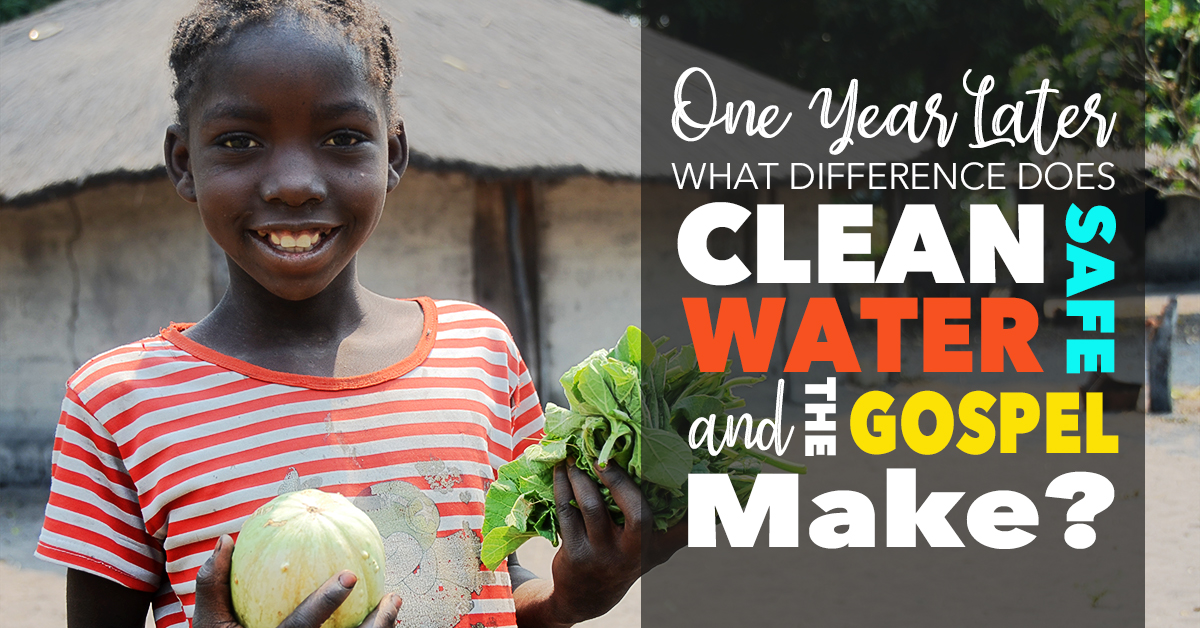 This article was originally published in the November 2019 edition of ITMI Monthly.

ITMI’s Kent Reisenauer arrived at the Lusaka airport, weary after over 24 hours of travel.

With some trepidation, he began to search the baggage claim area for the black, plastic tubs that bore cargo important to the ministries of several ITMI partners as well as his own personal baggage.

With relief, he located the two black tubs. But his clothing and personal items were nowhere to be found.

Kent realized he had a choice to make.

Would he be confident in his own ability to cope with the demands of travel without his personal necessities? Or would he put his confidence in the Lord’s provision?

As he made the choice to be confident in the Lord’s ability to meet his needs, he found it easier to bear the fruit of patience. Lasting patience grows out of trust in the Lord.

Kent and ITMI partner in Zambia, Timothy Keller, arrived at Johan and Lesley Leach’s home and ministry base outside the small trading post settlement of Chavuma, Zambia. Kent’s personal baggage was among the cargo bouncing in the back of the 4x4 bakkie.

Just east of the wide Zambezi River, Chavuma is the site of one of the few places along the Zambezi where you can load your vehicle on a barge and cross the river with it.

West of the wide and meandering home to crocs and hippos, the flood plains are home to the Luvale tribe, whose small villages dot the plains.

Further west lies the border of Communist Angola, and beyond that, more Luvale villages.

The ministry base was buzzing as the rebuilding of Johan and Lesley’s home was in full swing.

Just two months before Kent and Tim’s arrival, the Leaches had watched their newly built home go up in flames along with all their personal items.

Over the last two months, ITMI supporters responded with a generous outpouring of their own resources to help the Leaches rebuild. During his visit to Chavuma, Kent observed the Leaches confidence in the Lord’s provision, and noticed that it was yielding peace and patience with the exhausting process.

No longer did the villagers open themselves up to disease by drinking water from hand-dug, holes in the ground contaminated by animals and insects.

The villagers have reclaimed hours once spent hauling water for other endeavors such as gardening. Kent’s group even loaded a large bag of ground cassava flour into their vehicle to take back to Chavuma for sale - something that hasn’t been possible before!

Just outside the village, bright green young plants burst from the earth in rows.

With clean water nearby, growing vegetables is an option and improves nutrition! 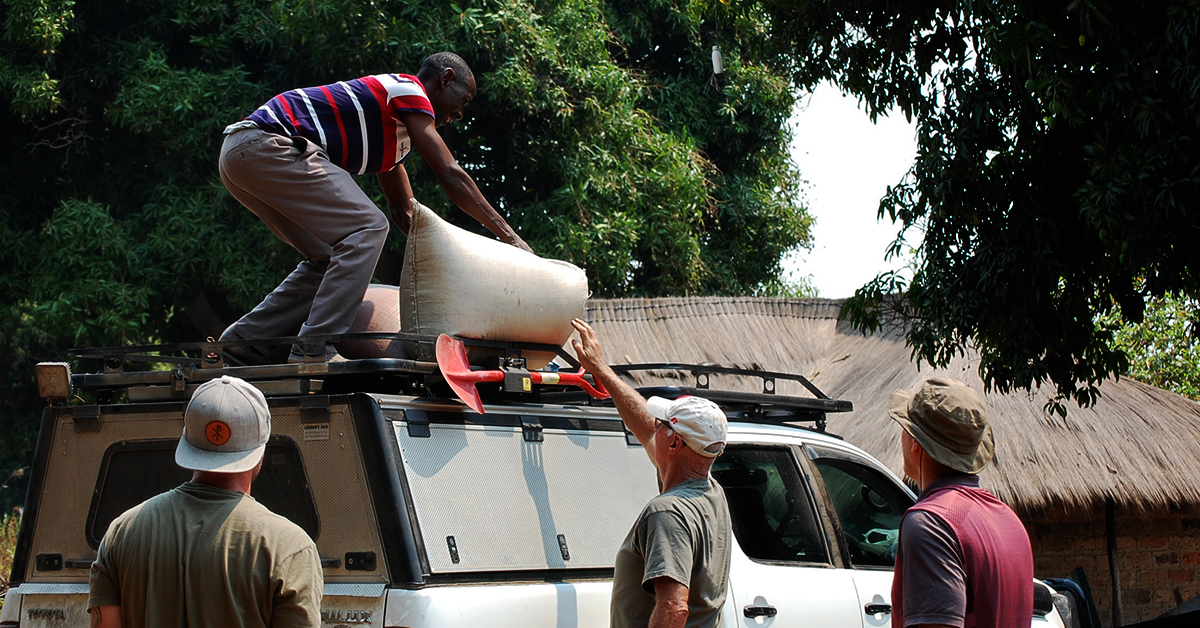 Now villagers have time to grind surplus Cassava flour to sell in Chavuma. 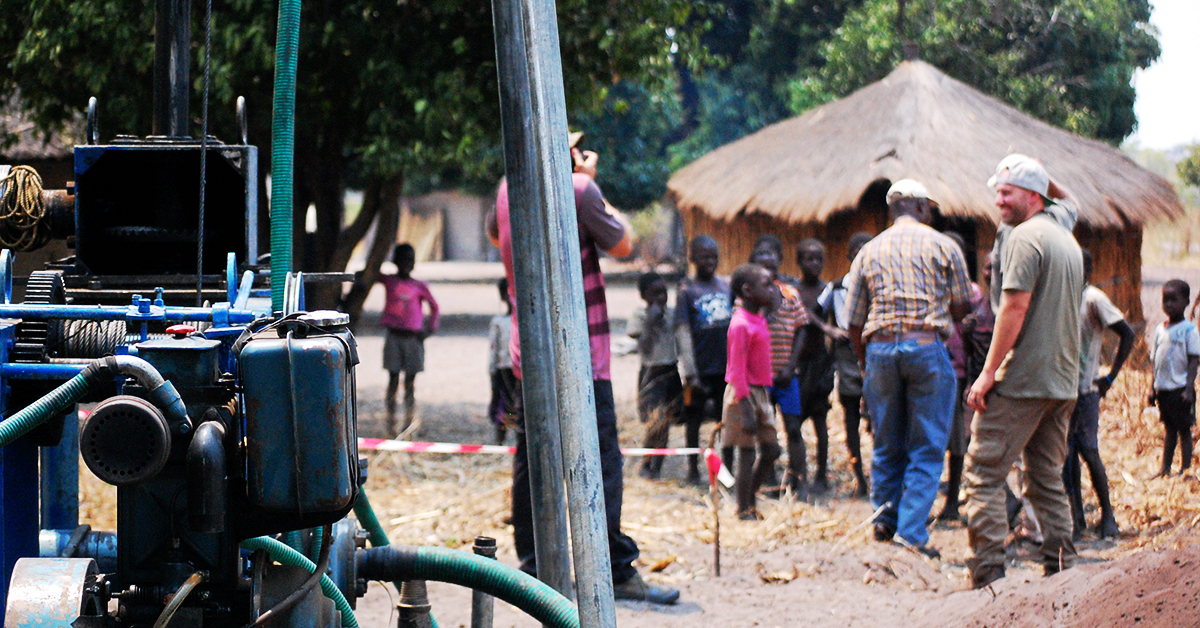 The drillers arrive in a village near the Angola border!

Kent gives village children a taste of the Lord’s love and care for them.

But that’s not even the best part!

Following this huge demonstration of a free gift - something virtually unheard of in Animistic cultures like that of the Luvale tribe - local evangelists and pastors have been visiting the villages monthly.

In each visit, they’re revealing more of the Biblical love story of a Creator who lost his people when they rebelled and sharing the Good News that the Lord’s grand plan to redeem and restore His creation to Himself has already been carried out and made available to them by Jesus Christ in these villages.

This year, our supporters rallied together and sacrificially funded the drilling of five more boreholes to bring all these blessings to the villages of Mangowa, Kateka, Kakanga, Mutamba and Kaulangoji.

The villages strategically chosen to be the recipients were located near the Angola border.

These wells will also serve as a way-point for the evangelists trained through Johan’s ministry traveling across the floodplains on foot, allowing them to push further west into Angola with the Good News.

As the drillers punched through the layers of dirt with their towering equipment, the village rejoiced.

It had been about a year since Johan visited the villages to discuss the borehole with the chiefs and survey the area for a good location. The villagers had waited patiently.

Perhaps they were leery of yet another promise like the many before that had not been kept. But their utter lack of resources and abilities to have a borehole drilled in their village meant they had to wait patiently to see if Johan’s team would keep their word.

Now the evangelists can show them where they can place their trust and never be let down - a Father that loves them and is drawing them to Him.

Throughout the rest of the trip, Kent would see our partners demonstrating that patience that stems from confidence in the Lord’s provision.

He noted our partner Eugene Kalunga and the Administration at Excellence Christian Academy patiently waiting for the Lord to provide for their needs, from the completion of the new village school Eugene is building, to the daily provision needed for operations, like new tables for the students.

He witnessed the fruit of ITMI’s Kelly and Cherise Smith’s patience. They patiently waited for years and trusted him through setbacks and thefts before they could begin planting crops on their rural property in KwaZulu Natal, South Africa.

While Kent was visiting, at long last, they began erecting a simple but effective fence around their property. The fence was something they needed to do because of intense thievery, but at the same time, were reluctant to do.

They want a warm and welcoming presence in the community, but now that their hospitality has been established with years of building relationships, the fence can be erected to protect crops from theft and animals and soon they can begin growing produce to benefit their ministry among the Zulu tribe in South Africa.

(Much more about the Smith’s impact in South Africa can be found on our website, including a recent interview with Kelly and Cherise!)

As Americans saturated in an individualistic, self-reliant society valuing responsibility and hard work, it’s easy to rely on ourselves. After all, in many senses, we are empowered and capable. We have many resources at our fingertips.

But when we are stripped of those powers by circumstance, travel or disaster - or even by intentionally giving sacrificially - we truly learn to put our confidence in the beyond capable hands of the sovereign Lord who loves us and eagerly lavishes us with good provision.

This is - we believe - one of the reasons He asks us to give. Because He wants us to know the joy of true dependence on Him.

So many big things are happening in Stone Hill, and ITMI supporters have had a direct hand in turning this settlement into a completely different place than it was several years ago. These photos tell the story of the impact that is possible when people come together and offer what they can. ... See MoreSee Less